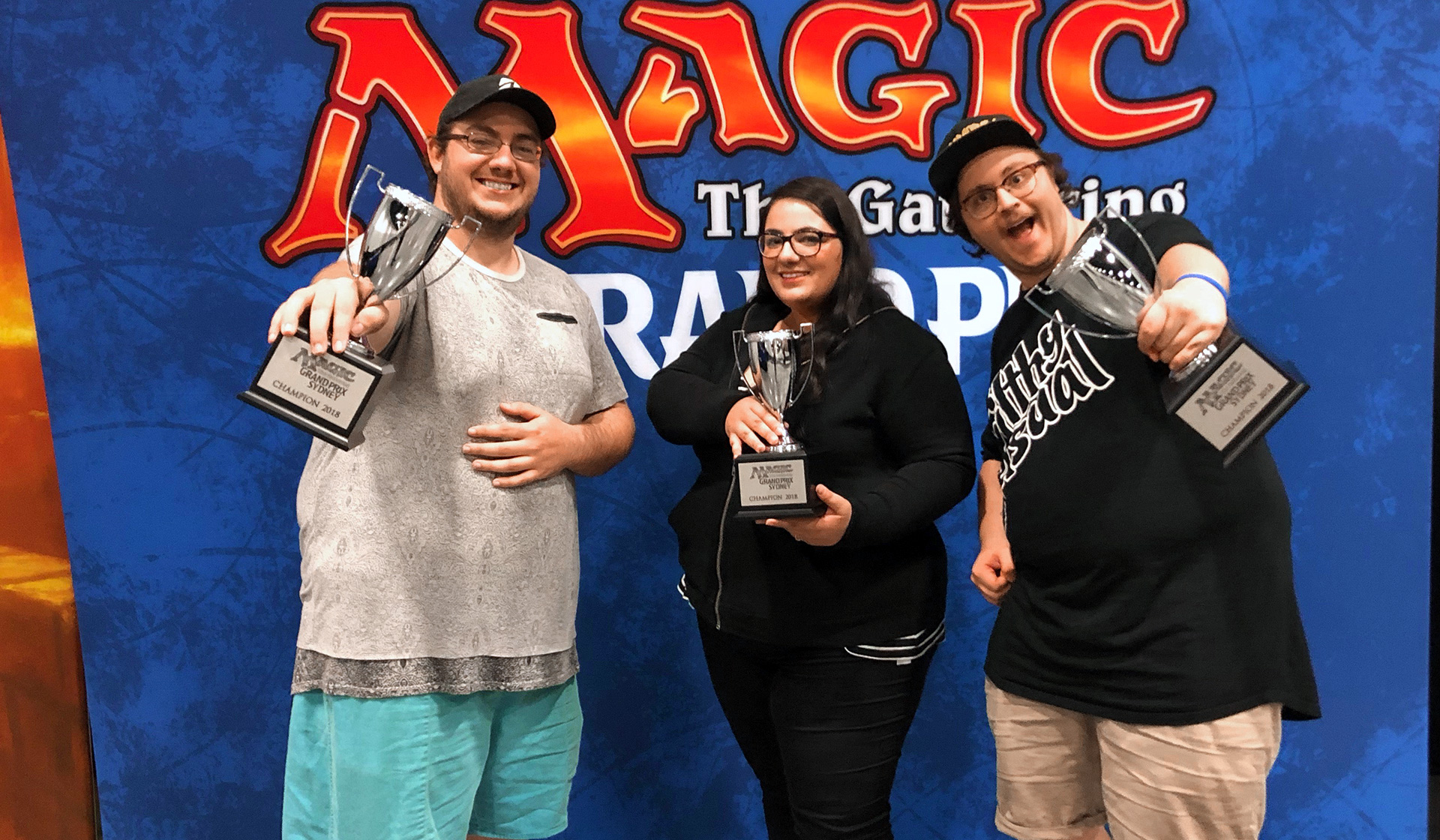 Jessica Estephan, Ryan Lewis-Jonns, and Lachlan Saunders have made Magic history in Sydney this weekend, keeping the trophies on home-turf and cementing Estephan as the first woman ever to win a Magic Grand Prix!

THE HASHTAG FOR GRAND PRIX SYDNEY IS #GPSYDNEY. JOIN THE CONVERSATION.

Jessica Estephan, Ryan Lewis-Jonns, and Lachlan Saunders have made Magic history this weekend in Sydney, with Estephan becoming the first woman ever to win a Magic Grand Prix.

We began the weekend with 350 teams, and Jonathan Venturi, Benny Yau, and Mathieu Beaujard from Melbourne all but obliterated the competition going undefeated on Day 1 and entering the Top 4 with a sizeable 5 point lead on everyone else.

Estephan/Lewis-Jonns/Saunders strode confidently into the Top 4 as third seed, and the highest team on 33 points. Across from them in the semifinals were Dirk Crasto, Matt Rogers, and Nicholas Barlow from New Zealand, who’d finished second seed with 34 points.

Venturi/Yau/Beaujard finally stumbled, falling in the semifinals to fourth seeds from Canberra, James O'Rourke, Jacob Golding, and Aidan Frisch, while Estephan/Lewis-Jonns/Saunders followed through to knock out the Kiwis, setting up the all lower seed finals.

Estephan/Lewis-Jonns/Saunders took an early lead in the finals but all three matches were soon tied up at one game apiece. Saunders was first on the scoreboard, with Estephan right behind him and the rest, as they say, was Magic history!

All four teams have qualified for Pro Tour 25th Anniversary in Minneapolis in August, but I’m sure all of us here will remember most fondly being a part of this historic moment for Magic players everywhere.

Teams gradually peeled away from the Main Event as it got closer and closer to the Top 4 playoffs, afforded many teams the opportunity to explore the rest of what Grand Prix events have to offer....

After 14 Rounds of gruelling team Unified Modern play, we have a Top 4, and because we know you love this stuff, we have all of the decklists they played to get there. Remember, each deck within a...

350 teams descended upon Grand Prix Sydney this weekend, but we could only squeeze the four very best teams into the Top 4. After Day 1, we were down to just 45, but that wasn’t enough, we kept...

Day 1 started with 350 teams playing Team Unified Modern, but by the time the dust settled on the Sydney International Convention Centre, only 45 teams remaining to go through to Day 2. Jonathan Venturi, Benny Yau, and Mathieu Beaujard stand alone at the top of the standings as the last undefeated team, but they are followed closely by last year’s Champions: Jim Wilks, Simon Linabury, and Ivan Schroder, last year’s Finalist Yuuya Watanabe, this time teaming with Ken Yukuhiro, and Kazuyuki Takimura, and many more great local players!

Walking the floor of a Magic Grand Prix is a wonderful and unique experience. Crossing paths with old friends you haven't seen in years, meeting new friends you'll see again year after year,...