It was a fan-favorite finals. Amateur Sheng Hsun Hsia walked through the Top 8 like he owned it, dispatching Morris Song with style in the deciding third game before savaging Joe Wang 2-0. In the other bracket, Chiang ensured an all-Taiwan finals when he drew Albertus Law and his Psychatog deck for the semifinals, a dream matchup for his Squirrel-Opposition if ever there was one. He met Hsia at the final table, and they split the first two games. In the third, a game of cat-and-mouse ended with Hsia hard-casting Phantom Nishoba on an empty board. Two attacks later it was over. Congratulations to Sheng Hsun Hsia, 2002 Grand Prix - Taipei Champion! 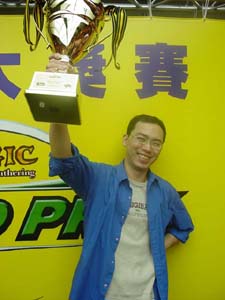