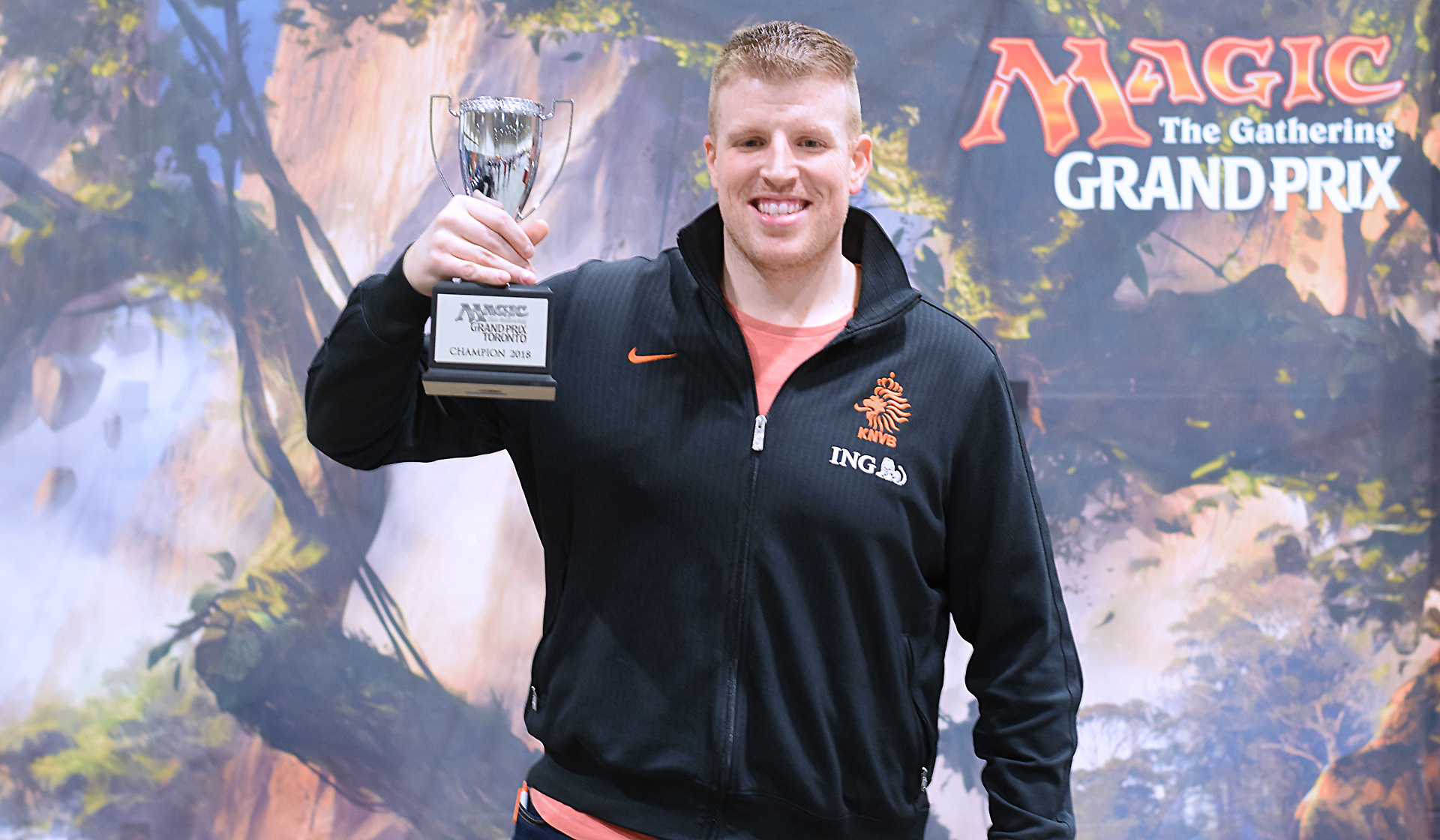 THE HASHTAG FOR GRAND PRIX TORONTO IS #GPTORONTO. JOIN THE CONVERSATION.

If last week’s look inside Modern at Pro Tour Rivals of Ixalan was an exciting glimpse into Modern’s wildest format, Grand Prix Toronto was the perfect follow-up. With more than 1,600 players braving the snowy weather to make the trek, all eyes were on Modern as players showed up and found success with dozens of unique decks.

In the end, it came down to eight players - Jonathan Zhang, Jon Stern, Luke Purcell, Alessandro Pogorzhelsky, Dan Ward, Ben Ragan, Chris Dockrill and Bertrand Joseph-Pare – with seven distinct archetypes. It was a thrilling Top 8, with games won or lost with instant-speed combos in end steps to games decided by a flurry of burn spells to a tournament decided by one giant Bogle.

And that Bogle (well, Gladecover Scout) belonged to Dan Ward, who sweated out a hack of a Top 8 in which all three of his matches went the full three games. He knocked off Alessandro Pogorzhelsky’s Traverse Death’s Shadow deck before squeaking past Jeskai Control in the semifinals, redeeming a Saturday loss in the process.

That set up a finals match against Canada’s own Jon Stern, and the finals went the distance, with Stern hoping to use Ensnaring Bridge to hold off Ward’s Bogles while burning him out. But Seal of Primordium off the top gave Ward the window he needed, and a creature loaded up with Daybreak Coronet was enough to send him to the Toronto title.

Congrats to Dan Ward, the victor of Grand Prix Toronto!

Making the elimination rounds of a tournament as large as Grand Prix Toronto – more than 1,600 players strong – is an amazing accomplishment in the Magic world. These are the eight players...

Eight players, with seven distinct archetypes. Diversity in Modern is alive and well – here are the decks and players that advanced to the Top 8 of Grand Prix Toronto. ...

More than 1,600 players showed up to snowy Toronto, Ontario to heat up Modern north of the border. Coming on the heels of an exciting Pro Tour in which a wildly diverse Top 8 led to Luis Salvatto...

With more than 1,600 players at Grand Prix Toronto, the cut between Top 8 and the Top 32 was a razor-thin margin. These are the players that put up a notable finish at the event. ...

We may be buried in snow here in Toronto, but Modern is on fire after a thrilling Pro Tour in Bilbao, Spain last week. More than 1,500 players braved the weather to make it here, including the world’s top-ranked player in Seth Manfield, along with Hall of Famer Ben Rubin, No. 15 Sam Pardee, No. 16 Brian Braun-Duin and more.

It was just a week ago that Luis Salvatto won Pro Tour Rivals of Ixalan wielding Lantern Control, but the format is more wide-open than ever on the heels of a Pro Tour that saw seven different archetypes advance to the Top 8. Players are sure to be packing their Stony Silence and Ancient Grudges this weekend, and all eyes will be on whether or not the quirky prison deck can run it back after its strong performance last weekend.

We’ve got the full range of decks on display this weekend, and you never know what’s going to pop up in Modern – after all, Lantern Control was itself once a fringe deck spotted in the wild at a Grand Prix.

You can follow all the action live at Twitch.tv/Magic!

More than 1,600 braved the snowy weather to make it to Grand Prix Toronto, and the Modern format didn't disappoint. Coming on the heels of a Pro Tour Rivals of Ixalan in which seven different...