This is not about making predictions. The people listed below had literally already won the first three rounds of the tournament when they sat down for the player meeting this morning. In fact, they had won them yesterday, by going undefeated in one of the GPTs which traditionally form the prelude to every Grand Prix event.

So what decks escaped Friday's grind with perfect records? The following sample gives a good impression of what's been doing well at the Trials. Among the winning decks there was green-red Tron, Life from the Loam/Seismic Assault, Splinter Twin, and a Melira-Pod. But the archetype with the strongest showing overall was aggrocontrol based in blue and white. Delver of Secrets teamed up with Lingering Souls, Snapcaster Mage flashed back many a copy of Path to Exile, and even a very familiar Bird once again picked up his trusted Sword of Feast and Famine. As one judge put it, "I'd expect a lot of Squadron Hawks this weekend."

Interesting for very different reasons is Adrian Buser's trial-winning deck, which you can find at the end of this piece. Take a look!


OK, now this last deck obviously didn't win a GPT in the Modern format, if only for the fact that it only has 40 cards. But did you know that GPTs are no longer exclusively played in the format of the corresponding GP? Don't have your deck ready on Friday? Or simply want to mix things up? Then come join a Trial anyway!

Christian von Kalkstein may not be a name many people will recognize. The German Grand Prix regular has been playing GPs for ten years, and from 2006 to 2008 qualified three times for the Pro Tour, but his best finish to date came just a few weeks ago at Grand Prix Madrid, where he ended up in fifth place. What's more, he started that tournament without byes, got his first loss in round one and his second loss in round three. 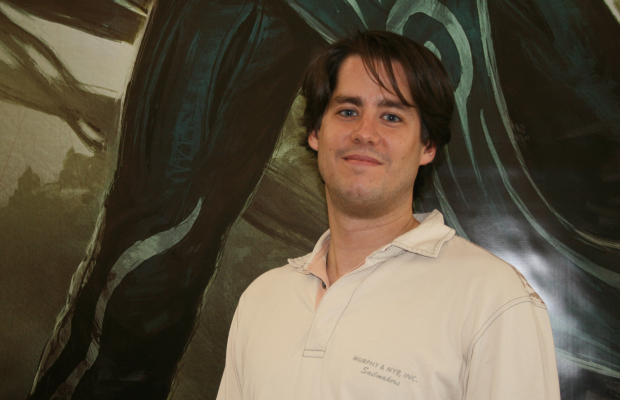 So how does one re-focus after a 1-2 start? What were his thoughts at that point?

"I thought, now I'm obviously going to make day two," Christian joked. "No seriously, I actually didn't feel too bad about it. The worst had already happened and the pressure was off. I was basically playing for fun. Then I kept winning ..."

And that he did. 12 wins in a row put him in the Top 8 where he sadly took an immediate loss in the quarterfinal. "It was kind of the same effect, only in reverse. Suddenly the pressure was back on," explained Christian. "I figured I gotta win this match to qualify for the Pro Tour. And then, naturally, that didn't happen."

"I'm still happy about my performance, though" he said. "Super happy!"

"This weekend I have three byes. Also I just got a taste of Top 8, and I would really like to qualify for the Tour again. So I'm feeling some pressure," he mused. "But nowadays I mostly play for fun and, more than anything else, I have every intention to have fun this weekend."

Here at Grand Prix Turin, we see the Modern format as it has blossomed over a full PTQ season, following its debut at Pro tour Philadelphia, and subsequent ebbs and flows since, where bannings and metagame shifts have shown that, matching with the predictions of many pundits, this is a wide open format with a whole host of viable decks.

In the beginning, we had Pro Tour Philadelphia, and it was good. There, combo decks were ferocious, with Splinter Twin in the hands of Samuele Estratti of Italy taking it all down, and the best options to fight combo decks were very aggressive builds such as the Affinity deck of Chikara Nakajima, or the innovative Zoo deck sporting a smattering of countermagic, that placed Josh Utter-Leyton in the finals.

This was a format where infect could kill a player as early as turn two with a bit of help from Blazing Shoal, and Emrakul, the Aeons Torn could find itself in play terrifyingly early thanks to the likes of Cloudpost and Through the Breach. Aggro was almost synonymous with 'Zoo' as casting Wild Nacatl on turn one and swinging for 3 on turn two was a real gold standard for aggression. While the format was good, it had room to get better.

Since some bannings in the early days, things have opened right up, and a rip-roaring PTQ season shows that there is a huge amount of room for innovation in the newest format (albeit not the one only sporting new cards). Arguably the biggest winner from the development of the format is control; now that the combo decks have marginally fewer card drawing spells, and the aggro decks don't have Wild Nacatl, the format affords players the turns to establish control of the game and leverage countermagic into a dominating late game position.

Any of you who are regular followers of Mike Flores' Top Decks will know that there are competitive decks in the format now to scratch the itch of just about every type of player. On our CoverItLive stream this weekend, Rich Hagon is running a full 32 deck March Madness-esque bracket of competitive decks in the format. With so many cards to play with, it seems inevitable that there will be quite a few good decks, but this really is madness;

Some of these decks are more likely to take down the prize than others, but each and every one of them has game, and we're pretty sure that there are great decks not even on this list!

How on earth did we get here, into this land of confusion, where there is plenty of love to go around to every type of deck? Well, let me take you back to Worlds. Here the post-Philadelphia bannings were in full-force, and we had a format where we started to see sparks of the innovation that would become the hallmark of the format.

With Modern in effect being 'all of the cards with modern card borders' (yes, I know that Future Sight borders, reprintings, Commander deck specific cards and promos make it a little complicated, but work with me here), the starting point for a lot of innovation came with people taking their favourite decks from formats past, and jamming them in to see how they could compete.

Zoo was hugely popular at Worlds, at about 28% of the field, probably because consistent aggro decks are a good idea in an undefined format. Coupled with the fact that it was one of the best decks in Philadelphia it was a bit of a no-brainer that it would still be a force to reckon with. The Philadelphia all-star of Splinter Twin was also popular, as even with its claws clipped, it could still end the game in decisive fashion.

Melira combo, the latest in Project X type decks in green/white/black who go infinite in a variety of ways, only really got going at Worlds, being a complex deck to get just right. Here is the list from Andrew Cuneo, who was having a great tournament all around that weekend;

This list looks to abuse the relationship between Melira, Sylvok Outcast and persist on Murderous Redcap and Kitchen Finks to (with the help of a sacrifice outlet like Viscera Seer) generate infinite life or infinite damage. With so many ways to search for key creatures, it has a lot of flexibility, and a powerful endgame. It was one of the first decks to truly come out as a 'modern' deck rather than something we might have seen before; requiring as it did a mix of cards from blocks that hadn't interacted before.

Following Worlds, that's when the real floodgates opened. The format better understood, control worked its way into the public conscious more thoroughly. It seemed inevitable that Squadron Hawk-Blade would get there eventually, making the likes of Marco Orsini-Jones very happy (it got him many a PTQ top 8)