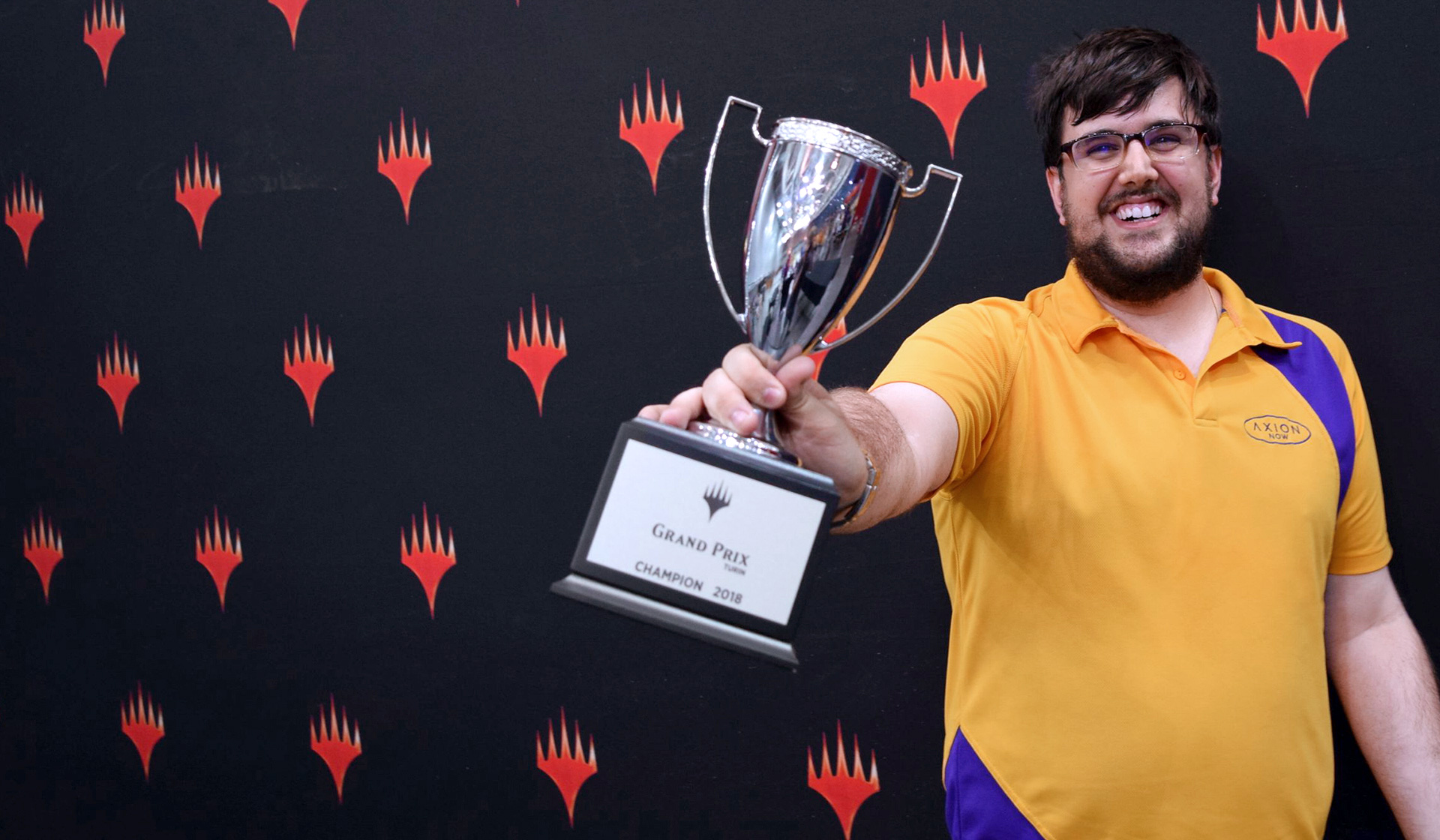 Using Goreclaw to great effect, Joao Choca mauled all opposition in M19 Limited, including Michael Kundegraber in the finals, to become champion of Grand Prix Turin 2018!

THE HASHTAG FOR GRAND PRIX TURIN IS #GPTURIN. JOIN THE CONVERSATION.

1,032 players on Saturday. 221 after the Day 2 cut. Eventually eight players in the feature match area for the final Booster Draft. Then two players to duke it out for the fame and the fortune, the title and trophy.

Core Set 2019 Limited had shown itself to be an interesting format all weekend long. In draft especially, aggressive decks had done very well. So it was only logical that two such decks would meet in the finals. On paper, Joao Choca's mostly green deck full of fat looked as if it might be too slow for Michael Kundegraber's double Heroic Reinforcements. On the battlefield, however, it looked anything but slow, as Goreclaw, Terror of Qal Sisma sped things up enough to win any race.

After fifteen rounds, with 2 to the power of 10 (1,024) others eliminated, only eight players remained in the running for the fame and the fortune, the title and the trophy. Find out what these...

After fifteen rounds, with 2 to the power of 10 (1,024) others eliminated, only eight players remained in the running for the fame and the fortune, the title and the trophy. Find out more about...

Below you can find all the decks that were piloted to a perfect 3-0 record in the first three rounds of the day. All 27 of them. Thanks to Oli Bird who dug into a mountain of lists with me to...

1,032 players gathered in Turin this weekend for the first European Grand Prix to feature Core Set 2019 in Limited. After eight rounds, the field was reduced to 221, and one round later, just four players remained undefeated: Michael Kundegraber, Henry Channing, Sebastien Gerardin, as well as two-time PT Top 8er and champion of GP Athens Sebastian Thaler

These four would enjoy a head start over the competition in Sunday's Booster Draft rounds, but said competition was tough too. Just at 8-1, one could find Louis Deltour, Francesco Giorgio, Fabrizio Anteri, and Rosario Maij, all with multiple GP Top 8s already on their record, to name but a few.

It was going to be an exciting race to the top on Sunday. Check back then for further news and stories, for draft insight and decklists, and for the epic conclusion of Grand Prix Turin 2018!

Grand Prix Turin 2018 marked the first time players this side of the Atlantic and this side of the Urals got the chance to play Core Set 2019 Limited at the GP level. Many made use of the...

The main event only started on Saturday morning, but the action already began on Friday. Naturally, we were most interested in the Last Chance Trials run that day, as those actually influenced the...