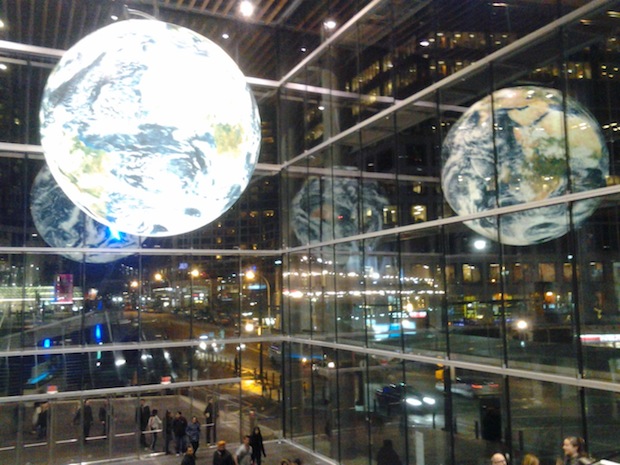 Nine rounds have done their cruel work, and where once there were over a thousand, now only 128 remain. Standing tall over them are our three undefeated players, Matt Sperling, Travis Boese, and Ryan Bemrose. They'll have a leg up on the field, but they shouldn't expect an easy road. Eight of the Top 25 Ranked Players will be in the hunt as well. Further complicating things are the nineteen players with fewer than twenty-one points who have snuck in to Sunday. So few players had byes this weekend, that we only had 109 7-2's!

We are in the twilight of this Standard Constructed environment as we head towards the release of Born of the Gods, and common wisdom has it that the Three Big Decks are Mono-Black, Mono-Blue Devotion, and Sphinx's Revelation decks of various colors. They seemed to be the most numerous in Day 1. Still, there are a thousand flowers blooming out there. What decks can navigate this wide-open metagame? Will Canada keep the GP Trophy on home soil? Will the Top 25 grab the Top 8? Day 2 begins at 9am local time. Tune in for all the action!

2 Advent of the Wurm 2 Selesnya Charm

4 Banisher Priest 3 Ajani, Caller of the Pride 3 Glare of Heresy


It seems like only yesterday Pro Tour Theros in Dublin, Ireland ushered in this vibrant Standard format. But oh how young we were back in October! There were only three Mono-Black Devotion decks at the entire tournament, and a total of two(!) Pack Rat s among them. No. 5 Jeremy Dezani along with the formerly named Team Revolution (now The Madness Project) cleaned up the Top 8 with then brand-new Mono-Blue Devotion deck. Playing Master of Waves and Thassa, God of the Sea was a novel idea in those days.

The other big Standard breakout of the Pro Tour was a little Legendary Land called Nykthos, Shrine to Nyx . No. 14 Martin Juza and the rest of the ChannelFireball team were calling it the new Tolarian Academy , and the comparison didn't seem to far off. With enough devotion, often the right play was to tap your first Nykthos, then play a second to make more. Though you would have to bin the first one via the "Legends rule," it was more than worth it for the extra seven or eight mana. The deck that best showcasing the land was No. 13 Makihito Mihara's Colossal Gruul deck – powering out green fatties like Polukranos, World Eater and Garruk, Caller of Beasts .

But those halcyon days are far behind us. Six Grand Prix later, the format has re-shaped and re-shaped again. Many of the Pros thought Mihara's deck was the one to beat coming out of the gates. But with the rise of Mono-Black Devotion (now sporting four copies of Pack Rat every time) and Mono-Blue Devotion, both of which were not positive matchups for the Colossal Gruul, the ramp deck all but fell of the radar. In fact, at Grand Prix Louisville, taken down by Brian Braun-Duin (and his four Pack Rat s), the Colossal Gruul was replaced by No. 25 Jon Stern's Gruul Beats that featured a total of zero Nykthos, and zero Garruk. The deck also played two Mistcutter Hydra s in the main to shore up the Mono-Blue Devotion matchup, which put three players in the Top 8.

Also at Grand Prix Louisville were two Esper Control decks. Its pilots who had struggled to contain all the new questions from other decks had now figured out answers. William "Huey" Jensen and Alex Sittner used the two powerful planeswalkers Elspeth, Sun's Champion and Jace, Architect of Thought , along with the supremely powerful Ætherling , to make Esper the pillar control deck in the format – proving that Sphinx's Revelation was still really, really, good.

2 Elspeth, Sun's Champion 1 Glare of Heresy 2 Soldier of the Pantheon

3 Thoughtseize 2 Soldier of the Pantheon