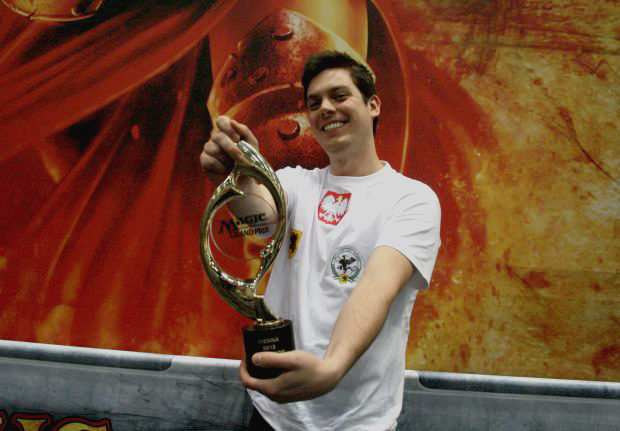 t has been an amazing weekend full of exciting Magic here in Vienna, Austria. 1,465 players entered the tournament on Saturday, 205 escaped Day 1's grueling nine rounds with records of 7-2 and returned on Sunday, but at the very end only eight players stood above the rest and headed to the play-offs. Those eight included both the 13th ranked player in the world Jérémy Dezani as well as number 10 Stanislav Cifka, though when the smoke cleared, little-known Polish player Marcin Staciwa was the last man standing. He had started the Grand Prix with a remarkable 12-0 run and actually only lost one match throughout the course of the event.

Like so many, Staciwa had chosen Mono-Blue Devotion which, while certainly not new, was the big story of the weekend. Five of the six 9-0 players ran Mono-Blue, it was the deck most represented in Day 2, and it put the most players in the Top 8. Standard at the moment appears to be firmly in the grip of mono-colored devotion decks. With the Standard qualifier season for Pro Tour Journey Into Nyx beginning next week and with the upcoming Grand Prix in Dallas/Fort Worth also in the Standard format, we'll soon get more input as to what the best deck is. Previous Grand Prix made the case for Mono-Black Devotion; this one emphatically argued for Mono-Blue, as not a single Gray Merchant of Asphodel made it to the Top 16, as opposed to 28 copies of Thassa, God of the Sea .

Until next time, we say good bye and ... Congratulations to Marcin Staciwa, champion of Grand Prix Vienna 2013!

3 Soldier of the Pantheon 1 Pithing Needle