1,246 players showed up in Warsaw to prove their prowess in Standard at this weekends festivities. And despite Pro Tour Ixalan taking place just a week ago it looks like the standard metagame has already started to sculpture itself into Magic history.

The big question was if this weekend would show that the format is about more than enegy based decks, Ramunap Red, God-Pharao's Gift and Approach of the Second Sun. Or if there's still a home for decks like Mono White Vampires or Green-White trampling doublestrikers? Will this Grand Prix confirm that the Pros have already figured it all out? After nine rounds of Swiss only four players remain undefeated and if their deck choices is a taste of things to come ... prepare yourself for a long winter.

Thirteen people with three byes showed up for Saturday‘s competition. Among them Pierre Dagen, Ivan Floch, Steve Hatto, Joel Larsson, Marc Tobiasch and Andrea Mengucci as well as top 25 ranked players (7) Martin Jůza and (15) Javier Dominguez. And since energy based decks were so successful at the Pro Tour last weekend it was no surprise to see as many as nine of them chose to pilot a version of it. Some even went as far as dubbing the format as "Kaladesh block constructed", as many of the format defining cards came from Kaladesh. Most chose the classic Temur build, or splashing black for The Scarab God. Whereas Joel Larsson was among the ones who went with Seth Manfield's Pro Tour winning Sultai version.

"I played the same deck at the Pro Tour, and it felt really good there. And as a bonus I didn't even have to resleeve he deck", concluded the Swedish Gold level Pro. 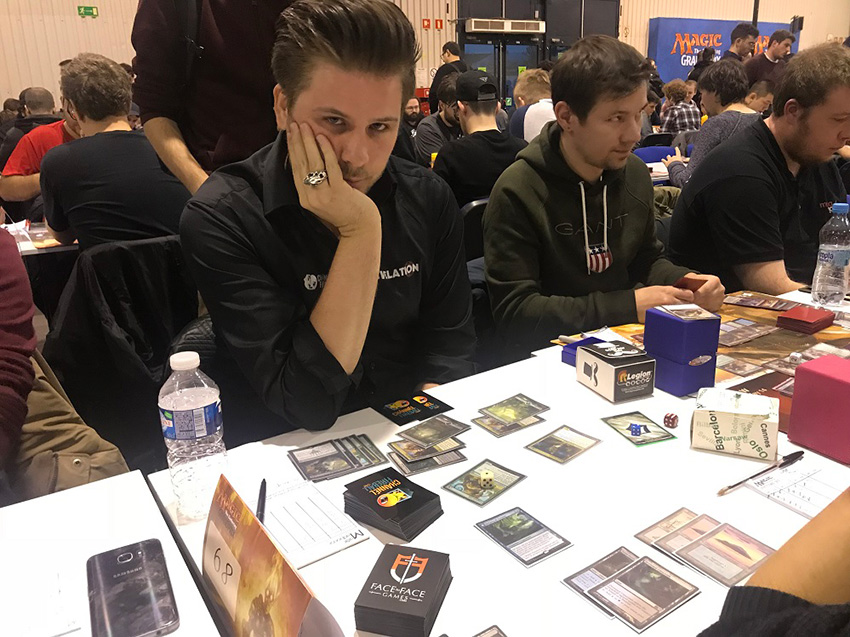 Joel Larsson didn't even have to resleeve his deck from Pro Tour Ixalan in Albequerque.

In pure numbers, this is how the metagame looked like for the 13 players with three byes:

The Grand Prix this weekend gathered not only travelling pros and aspiring Polish players. It also brought out Polish players that already have won a Grand Prix. Only four players have succeeded with the accomplishment and besides Maciek Berger they were all here this weekend. Mateusz Kopec won Grand Prix Vienna back in 2008, Marcin Staciwa also won Grand Prix Vienna, but in 2013, and Przemek Knociński took the trophy in Copenhagen 2015. And if there is a standard format fit for Knociński it should be this one, since he is known for loving aggro decks and have been piloting Mono Red decks around Europe for several years. But to his opponents surprise, he chose a different deck this weekend. 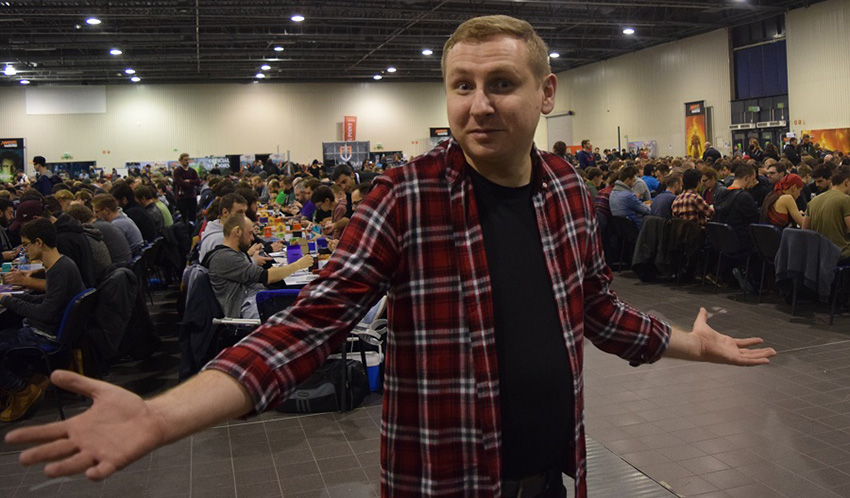 "I'm actually playing a Green-White aggro deck that wins with the one shot combo of Adorned Pouncer and Appeal/Autthority", he explained.

The deck is a Brazilian invention and was featured in an article by Paulo Vitor Damo Da Rosa earlier this week. The Polish aggro-player explained how he quickly fell for it.

"I sent an email to Willy Edel after the Pro Tour and said that I liked it and he provided me with a list and an updated sideboard guide. The play style fits me very well and I like how it plays out like a combo deck. You play creatures for a few turns and wait for your opponent to tap out, and when they do you can hopefullt deliver lethal damage in a single turn with the two card combo", he said.

None of the previous Polish Grand Prix winners attended Pro Tour Ixalan last weekend, but all of them said they liked the current state of Standard. 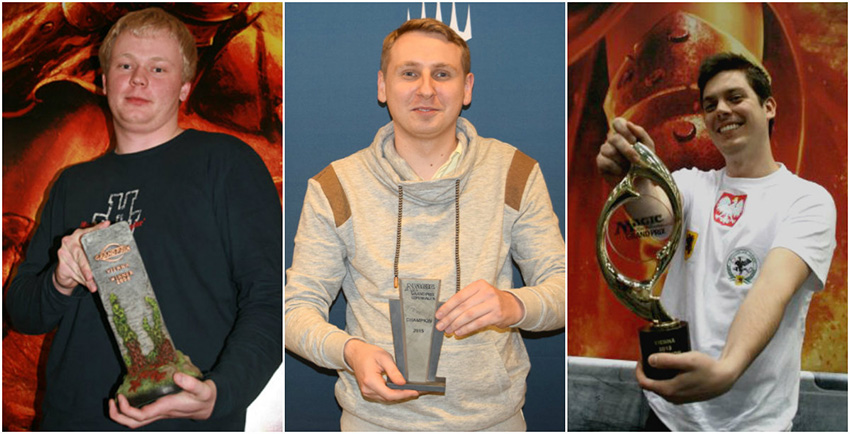 Another Polish player that have enjoyed success lately is Piotr Glogowski, who made the Top 8 at Pro Tour Ixalan in Albequerque. That made him the first Polish player ever to accomplish that task, which he was happy to point out when I stopped him for a quick chat.

"It feels really amazing to be the first one. And I think it solidifies the feeling that I've improved a lot in Magic, but also that I still can improve more. Since I'm primarily a Modern player I didn't think that I could become as good in Standard or Limited, but with enough testing it seems that I can", he said.

Piotr Glogowski is mostly known for being a Modern master, but his Pro Tour Top 8 proves that he is a jack of all trades when it comes to high level Magic.

Glogowski has many friends and followers, not only in Poland, but also online, where the 22-year-old streams under his alias Kanister, and has made something of a name of himself and his love for a Modern deck based on Latern of Insight. When he explained his standard choice for the weekend it was as predictable as to what deck he will be bringing to his next Modern tournament.

"Since I did well at the Pro Tour last weekend with four color energy I played the same deck here with only minor changes. But what I'm really looking forward to is the Team Modern Grand Prix in Madrid in December.

Those who have seen Piotr Glogowski at Magic tournaments either on camera or in person might also have noted his trademark yellow striped sweater. In fact, he seems to wear it at every single one. Needless to say, I felt inclined to ask him what the deal is – fashion statement or good ol' superstition?

"It started out when I made my first Grand Prix Top 8 in Milan back in 2015 with Amulet-Titan in Modern. I was wearing the sweater then and I figured I should keep wearing it for good luck. And so far it's worked out pretty good", he said with a smirk.

A common features of events this size was players sharing their bad beat stories or their own more exceptional exploits. After every round, you'd find friends gathering in groups comparing notes on their matches. One of the sweetest stories at Grand Prix Warsaw came courtesy of Thorben Sieksmeyer. The German player had made a run deep into Day 2 of a Grand Prix before, missing Top 8 at GP Stockholm last year by only a couple of points; this weekend he was doing well again. Case in point: the following attack phase.

"So my opponent, he had just cast Ixalan's Binding on my Deathgorge Scavenger, and now he attacked with his Fairgrounds Warden which had earlier exiled my Glint-Sleeve Siphoner," was how Sieksmeyer set the scene, and it was one foreboding scene right there, a chain reaction waiting to happen. 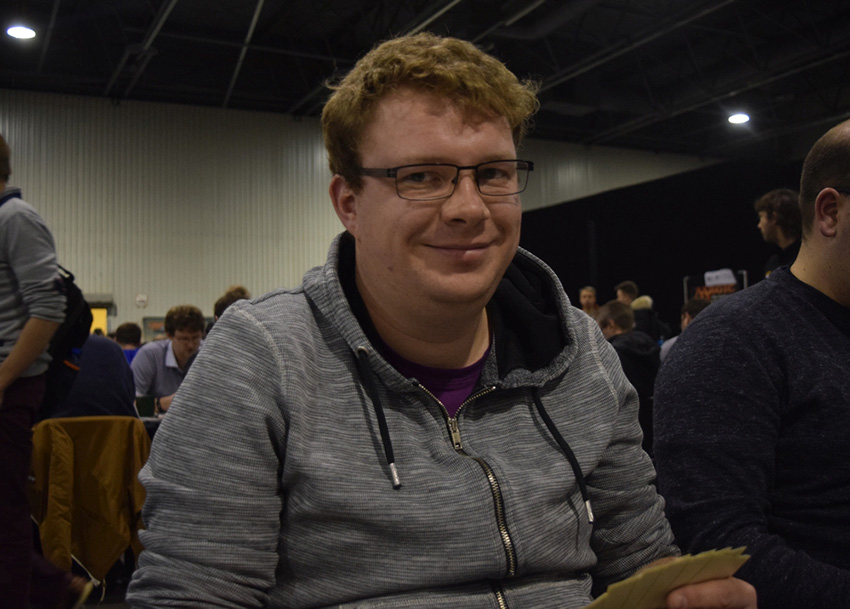 Thorben Sieksmeyer had his one Appetite for the Unnatural at exactly the right moment. Mise well.

"I don't think I ever got as much value out of Appetite for the Unnatural before," he said. "I destroyed Ixalan's Binding, got back Deathgorge Scavenger, blocked Fairgrounds Warden, got back Glint-Sleeve Siphoner ... At the beginning of combat I had zero creatures; now I had two, one of them completely for free!"

It probably wasn't the the most brutal attack step that happened at GP Warsaw. But it was a beautiful example of how things could go spectacularly awry in just one crucial moment, one of those sudden turnarounds which makes games of Magic so exciting!

Another brutal story came even before play had started. As standings were posted for round one I encountered Swedish Love Rask in a furious tempo heading towards the judges station. His dilemma it turned out was whether the cards in his deck still were playable after he had spilled an entire bottle of juice in his backpack. When I caught up with him his friends were still drying the cards with paper towels, and although some of the cards could be saved, his two copies on The Scarab God were destroyed by the liquid. Love Rask however, got his deck back together, and ended up making Day Two with a 6-3 record. As someone was quick to point out. Now we know that The Scarab God can truly never die. 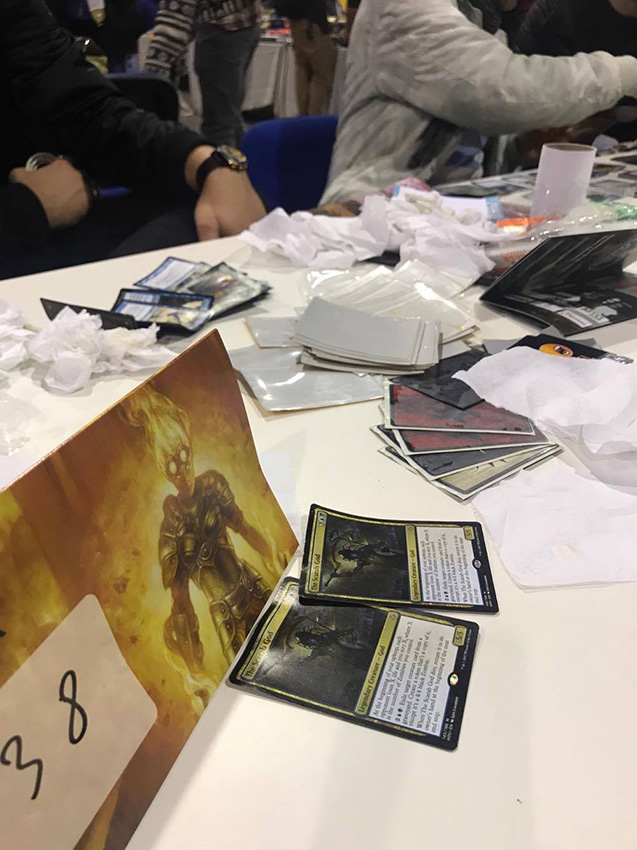 Love Rask was unfortunate to discover that a bottle of juice had spilled over most of his deck as he started unpacking for his first match.

Estonian Hannes Kerem was the first player to finish the last round as a 9-0 winner. His Blue-Green deck based on Electrostatic Pummeler carried the 30-year-old all day and when asked to pick one moment to share he didn't have to think twice.

Something his travelling friends from Estonia were quick to celebrate. 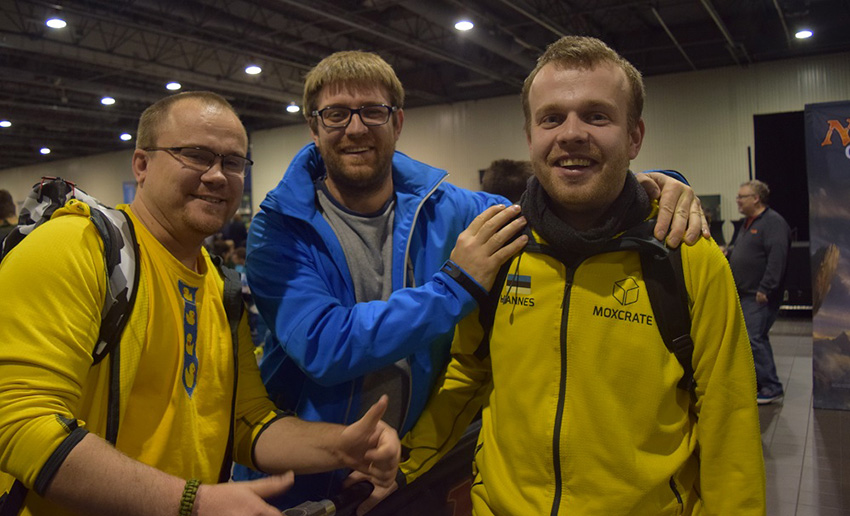 Hannes Kerem was happy to finish the first day with a 9-0 record after Day One. "But hurry up with the photo, they close the drafts soon" was his final remark.

For Russian Alexander Privalov it was his first 9-0 record at a Grand Prix, and he was clearly excited after his last win. Especially so when his opponent was so nice that he looked almost as happy as Privalov after the game. When asked about his deck, the Russian explained.

"I played Mardu Vehicles, but in Russia we call it Mashinki. There were many memorable games, especially against two one shot deck. But the best game was the last match. A very nice opponent and three interesting games. And I finally made 9-0!" 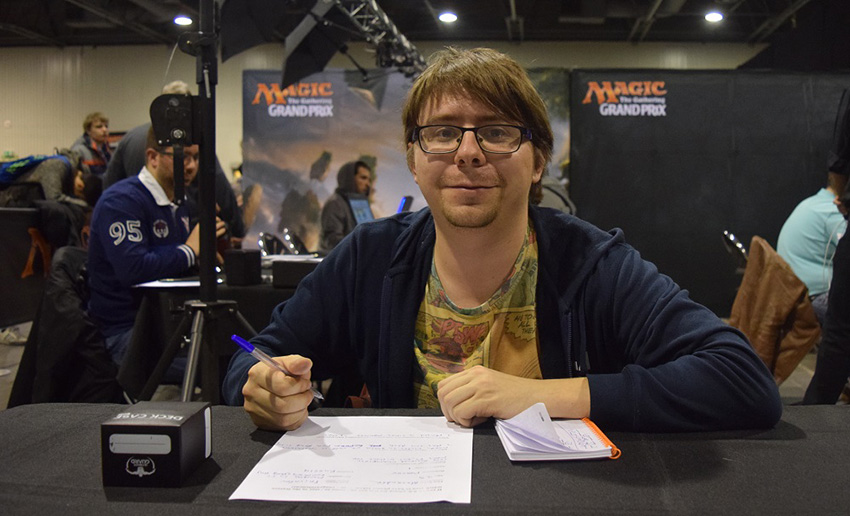 Alexander Privalov, IT-manager on weekdays and a successful Grand Prix player on the weekends.

The third undefeated player is 27-year old Frenchman Samuel Vuillot. Who chose Temur Energy as his deck based on it's performance at the Pro Tour.

"It was really close between this and Sultai. But I went with the deck with the late game power. When it comes to my matches the most exciting was beating Nicol Bolas out of my opponent's sideboard the last round. It was unexpected and quite hard to deal with. But I did it!" 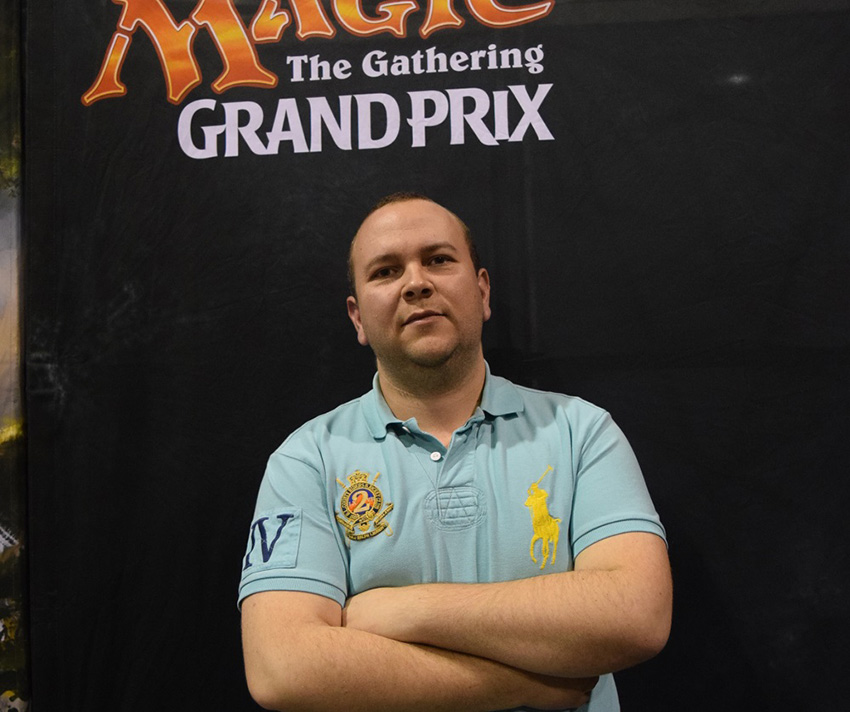 Samuel Vuillot, calm and collected after going undefeated on Day One.

Last but not least is 26-year-old Spaniard Pol Pizarro, who's friends threw him up in the air as if he'd already made the Top 8 after he finished his match very late in the round. He might only have played one Pro Tour to his name, but impressed with how he piloted his Four-Color Energy deck.

"I chose the deck because Luis Scott Vargas played it at the Pro Tour. And the most memorable match was round nine. Make sure to watch it on Twitch", 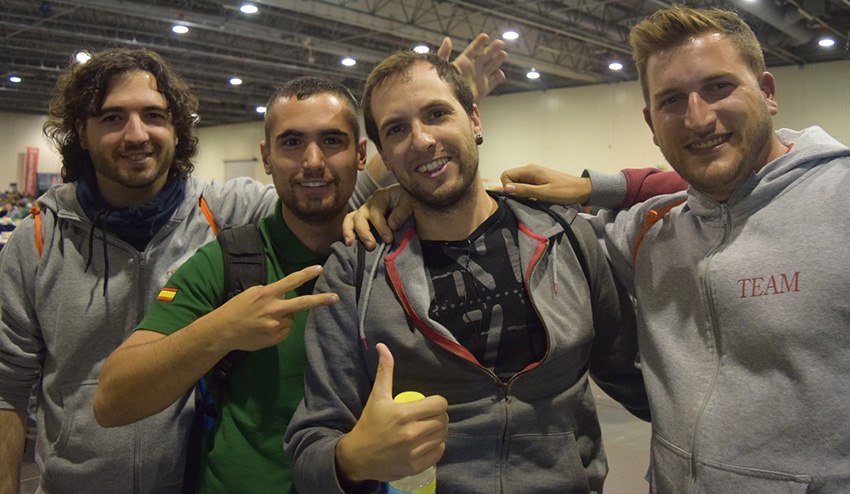 Pol Pizarro giving a thumbs up for his 9-0 record that his friends were fast to celebrate.

Nine rounds are over, but the best is yet to come. Only four players go to bed tonight with a 9-0 record an excellent chance to make the Top 8. The rest of the field will have to sleep more uneasy. But what decks will prevail? Will the feature match run out of Energy dice? Will it be Pro Tour Ixalan all over again or will something new rise to the top?

Tune in tomorrow to find out!