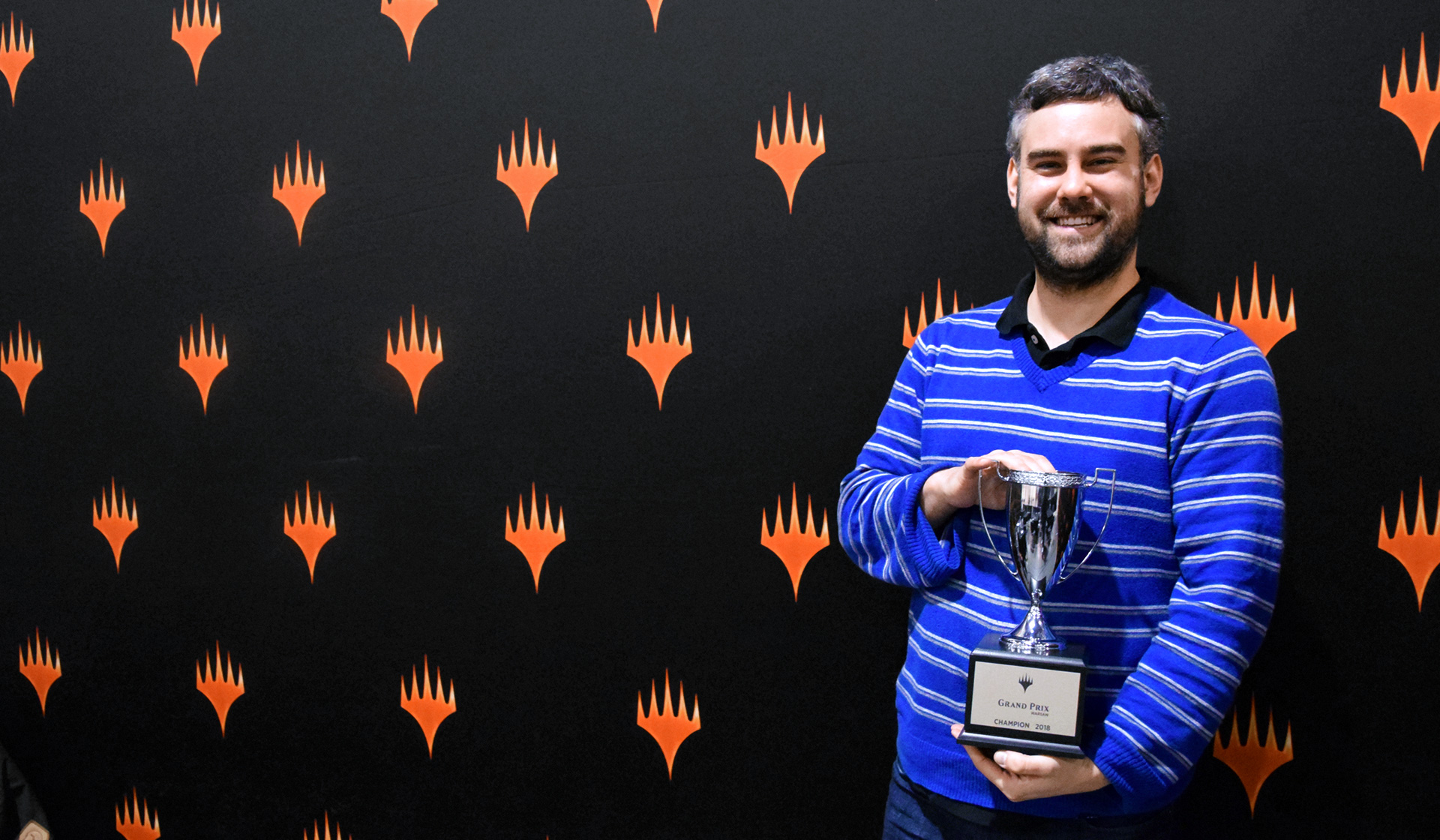 Eduardo “Walaoumpa” Sajgalik is the winner of Grand Prix Warsaw 2018! It took him a long way and a long day to get there, but in the end he stood triumphant with his Golgari deck in the finals against Julien Berteaux and his beloved Boros.

THE HASHTAG FOR GRAND PRIX WARSAW IS #GPWARSAW. JOIN THE CONVERSATION.

Eduardo “Walaoumpa” Sajgalik is the winner of Grand Prix Warsaw 2018! It took him a long way and a long day to get there, but in the end he stood triumphant with his Golgari deck in the finals against Julien Berteaux and his beloved Boros.

Both Eduardo Sajgalik and Julien Berteaux had been seen at the feature match area and the top of the standings for most of the tournament, so it was no surprise to see them both make it to the finals. It looked like Sajgalik might have trouble with the fast Boros deck, but in the end he got there with “creatures and removal, nothing special”, using his own words.

Also joining them in the Top 8 were Ukrainian Iurii Babych, Belgian Pascal Vieren, Estonian Hannes Kerem, the two Germans Johann Wallner and Christian Seibold along with blast from the past - Julien Nuijten. All of them outlasting the record field of 1,836 players to make it to the Top 8 in Poland's largest Magic Tournament ever.

After a long weekend of Magic, what else is there to do but look forward to the next one. Until then - congratulations to Eduardo Sajgalik - champion of Grand Prix Warsaw 2018!

This Grand Prix was HUGE Ok, you might have seen the numbers already. You've heard that this Grand Prix had 1,836 players, which by a far margin made it Poland's largest Magic tournament ever....

Want to learn a few tricks from the best finishers at the Grand Prix? Take a look at the decklists from our Top 8 competitors and decide - who drafted it better? ...

After fifteen rounds, only eight players remained in the running for fame, fortune and the right to call themselves champion of Grand Prix Warsaw. Find out more about these fine people...

Find below all the decks that were piloted to a perfect 3-0 at the first 29 draft tables of Grand Prix Warsaw's first draft. Why only 29 and not the full 46? These 29 draft pods included everyone...

1,836 players came to play and when the dust settled after Day One in Warsaw only 369 remain. Tomorrow they return for a battle of honor, glory and drafts that will decide the winner of Poland's largest Magic tournament ever.

Taylor Dix, Patrick Mackowiak, Thomas Veith, Pascal Vieran, Matteo Moure, Julien Berteaux and hometown hero Piotr Głogowski are the undefeated players with a 9-0 record. Several seasoned pros are joining them om Day 2, like (7) Martin Jůza (10) Grzegorz Kowalski and (12) Andrea Mengucci. Who will win and what will be the tales of draft and pride from Poland's largest Magic tournament ever. We'll find out tomorrow!

With 1,836 players the Grand Prix this weekend is officially Poland's largest Magic tournament ever. And as with any large tournament there were plenty of stories to tell. Here are some of the...

Seven players finished Day One with a perfect 9-0 record. Only one of them with a purely aggressive strategy in the form of Boros, the others featuring combinations of all colors except white....