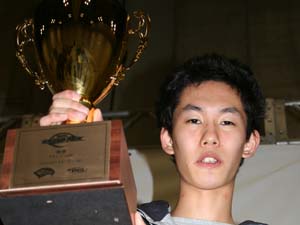 Richard Hoaen. Jelger Wiegersma. Antoine Ruel. Katsuhiro Mori. All of these stars made the Top 8 here in Yamagata, and all of them fell just short of winning the title, clipped before the finals by local amateur Takeshi Ozawa and Pro Tour-Kobe Top 8 member Takahiro Suzuki. Okawa made it past Yuu Murakami in the quarters and beat top seed Jelger Wiegersma in the semifinals to make the finals in his first Grand Prix Day Two. Suzuki had an even tougher road, beating Antoine Ruel in the quarters 2-0 and then outplaying World Champion Katsuhiro Mori in the semis to set up an unexpected finals pairing. In the finals, Suzuki won a tight Game 1 on the back of Stormbind and rode Ozawa's mana screw in Game 2 plus Spectral Force to his first Grand Prix title.

An unofficial tally for the Player of the Year race puts Shouta Yasooka at 59 points, 7 ahead of Shuuhei Nakamura and 12 up on Tomoharu Saito, meaning both will need outstanding performances at Worlds and hope that Yasooka stumbles in order to catch up. That's all for the action here in Yamagata, but be sure to check back in less than two weeks for complete coverage of the 2006 World Championships in Paris, France. Until then, congratulations to Takahiro Suzuki, the Grand Prix-Yamagata champion!

Seedings in the bracket do not indicate standings after Swiss. Pairings are determined at random. 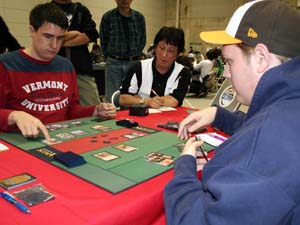 They finished one and two at the end of the swiss standings, but the randomized pairings for Draft Top 8s means they are stuck squaring off against each other now. Jelger nearly ran the table this weekend, posting an awesome 13-1 record through the 14 rounds, losing only to Takahiro Suzuki. Hoaen started the weekend 6-2, but 6-0'd his two drafts. Coming out of the final draft, Jelger's blue-red deck looks slightly superior in card quality and he has card drawing to stay consistent, but you can never count Hoaen out. His black-red deck is a little creature-light but has a boatload of removal to make up for that fact.

Jelger won the die roll and obviously chose to play. Blazing-Blade Askari and Fledgling Mawcor were his first two creatures of the game, matched by Hoaen's own Askari and a Mana Skimmer. The Skimmer and a Spiketail Drakeling from Jelger traded, while Hoaen used Conflagrate to kill the Mawcor. Dark Withering dispatched Clockwork Hydra from Jelger, making the board a Stormcloud Djinn for the Dutchie to Hoaen's Askari and Coal Stoker and the life totals 15-12 in favor of Rich. Wiegersma cast a pair of morphs on his turn, later revealed to be Fathom Seers that let him dramatically pull ahead of Hoaen in card advantage. Just as it looked like Jelger was going to go up a game, Hoaen flashed back his Conflagrate to kill a blocker and put Wiegersma at one after his attack, with fingers crossed that Jelger would not have anything left. He didn't and Hoaen was now up a game.

Game 2 was a flurry of action, with both players throwing down spells and creatures as fast as they could. Turn 5 saw Wiegersma with a board of Spiketail Drakeling and Blazing-Blade Askari to Hoaen's Pit Keeper, but Lightning Axe on the Drakeling discarding Avatar of Woe drew some whistles from the crowd, especially when Rich followed that with Dread Return, giving the Canadian an Avatar on the cheap. Wiegersma wasn't done either, Axing the Avatar right back to the graveyard while continuing to beatdown with his smaller creatures. Hoaen fought hard to keep up, but was done in by an inability to draw lands past his fourth until it was too late.

Before game 3 began, Hoaen decided to concede to Jelger. Since Jelger was already four points ahead of him in the Player of the Year race and closer to level 6, Rich decided to give the points to Jelger. This drew an outburst of comic disbelief from Kenji Tsumura who had a split in place with Hoaen, and also realized that the win in this round put Jelger one point ahead of him in the race as well. Fist shaking and cursing of one's ancestors may have even occurred.


Takahiro Suzuki is on fire, following up his first Pro Tour Top 8 just weeks ago with at least a semifinals appearance here in Yamagata. The kid clearly has game in Limited, especially when you consider he managed to pilot his way through the treacherous waters of an extremely good Day 2 here before wrecking Antoine Ruel 2-0 in the quarters. He'll need to overcome another superstar in the semis if he's to have a chance at his first Grand Prix title, since World Champion Katsuhiro Mori is now standing in his way. 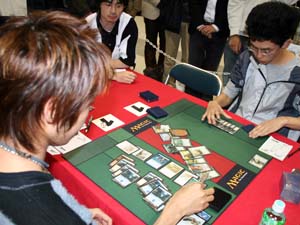 Suzuki lead off with a pair of suspended Durkwood Baloths to Mori's Stormscape Familiar and Watcher Sliver. Thallid Shell-Dweller gave Suzuki a solid blocker on the ground, but Pulmonic Sliver made it irrelevant - Mori certainly had the start he was looking for, a point made even more clear by Telekinetic Sliver on the following turn. Nice Constructed deck, Mr. World Champion… two turns later and Mori was up a game only five minutes into the match.

Suzuki again lead off with a suspended Baloth, but had a better follow-up than last game, casting Scryb Ranger and Thallid Germinator on consecutive turns. Mori was once again doing just fine with a suspended Ephemeron and the same Stormscape Familiar as last game. Mori remained stuck on two lands until after the Baloth came out to play and that was it. The shuffling and sideboarding in this match had literally taken twice as long as the play.

Suzuki took a mulligan in game 2, casting an Ashcoat Bear and Scryb Ranger, while Mori opened with another one of his ubiquitous Watcher Slivers. A turn later, Mori cast Stormscape Familiar for the third time in the match and then gave his Watcher a twin, while Suzuki merely summoned a Herd Gnarr. Thallid Shell-Dweller and Nantuko Shaman a turn later made the Gnarr big enough to get through Mori's Sliver, forcing Mori to chump with his Familiar. Mori cast Jedit's Dragoons to gain some life back, but Suzuki came right back over the top with a hardcast Baloth. Nonplussed, Mori plopped an Ephemeron down on the board. One turn later, Mori put his trump into play - Telekinetic Sliver was now going to be able to lock down anything important on Suzuki's side of the board and the pair of Watchers made it virtually impossible for Suzuki's splash of red removal to kill. This is where things got interesting…

A turn later, Mori added to Suzuki's misery with a Pulmonic Sliver and then attacked with his Ephemeron and Wacther, but stoned himself because he forgot Suzuki's fresh Gemhide Sliver also had flying while Scryb Ranger blocked the Ephemeron at no harm to itself. Realizing that he would be unable to get through successfully without some help, both players backed off and started stockpiling creatures on the board. By the time attacks resumed, Suzuki had ten creatures on the board to Mori's seven, and that was not counting Suzuki's spore counters. A glut of land draws on Mori's part is probably what really caused him to lose this game, but a second mistaken attack certainly didn't help, especially since it let Suzuki get in some free damage. Two turns later, Suzuki had completely turned the game and match around and attacked twice for the win, though he did receive a slow play warning in the process. 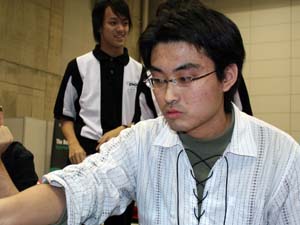 For a Grand Prix Top 8 that was loaded with star power, this finals could have been a lot better in terms of name recognition. Takahiro Suzuki is clearly one of the new generation of Japanese rising stars now, courtesy of his Top 8 at Pro Tour-Kobe followed by a finals appearance here in Yamagata. An 18 year old student from Tokyo, Suzuki's road here was even more impressive because he smashed Antoine Ruel in the quarters before outplaying World Champion Katsuhiro Mori in an excellent third game of the semis. Suzuki will certainly be a player to watch at the World Championships and during the '07 season.

Sitting across from Suzuki is local amateur Takeshi Ozawa. His road to the finals was a bit easier than Suzuki's, as he only had to face Yukii Murakami in the quarters, though he did manage to overcome the practically unbeatable Jelger Wiegersma in the semis. Ozawa is locked in as the biggest official money winner at this GP because of the amateur cash he gets to take home, but he's hoping to add a trophy to his mantel before heading home tonight.

Ozawa won the die roll and cast Prismatic Lens on turn 2 followed by Foriysian Totem on turn 3, giving him a ton of early mana. Suzuki was progressing a bit faster in the tempo department, suspending Durkwood Baloth on turn 1, and following that with Thallid Shell-Dweller and Yavimaya Dryad, but his face fell a bit when Ozawa cast Endrek Sahr, Master Breeder on turn 4 and added a hardcast Corpulent Corpse to it a turn later. Suzuki battled back with fat in the next two turns, putting Jasmine Boreal into play and then hardcasting a second Baloth, giving him a great deal of boom boom for beatdown. 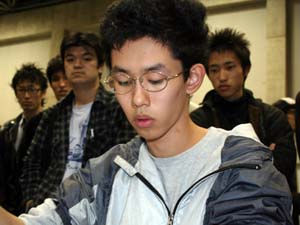 Faced with an avalanche of fatties, Ozawa got busy showing why he'd made it this far, trading off chump thrulls and then restocking to keep his life total high and Endrek alive. Corpulent Corpse was busy lowering Suzuki's life total while this was going on, but things clearly took a turn for the worse once Stormbind resolved on Suzuki's side of the board. Bind took down the Breeder, but not before Ozawa put another five thrulls on the board on the cheap, madnessing out Reclusive Gorgon as part of the bargain. Margins for error on both sides were now razor thin. Scryb Ranger plus Stormbind combined to take out Ozawa's two evasive attackers, and going beyond that to completely destroy Ozawa's board, giving Suzuki the early lead.

Ozawa kept a two-lander on the play and lucked into Prismatic Lens on turn 2 followed by Tresspasser il-Vec. Suzuki once again had a hot start, opening with Gemhide Sliver and Yavimaya Dryad then slamming Spectral Force down on turn 4. Ozawa failed to draw a third land and that was it - game, match, and Grand Prix-Yamagata to Takahiro Suzuki!

1 Thrill of the Hunt

1 Thrill of the Hunt

1 Magus of the Mirror 1 Mindstab