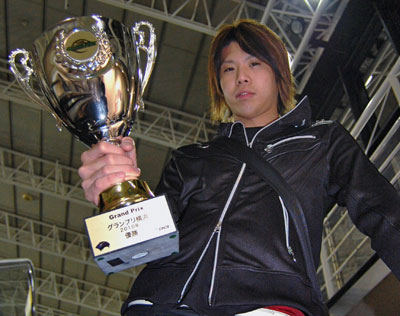 Katsuhiro Mori is your Grand Prix–Yokohama 2010 champion! Navigating an field of 1122 players and nearly as many different archetypes, Katsuhiro Mori had armed himself with Thopter/Depths. He broke through to Day 2 with just a single loss to his name, and cruised to the Top 8. The Top 8 was a microcosm of the variety of decks in attendance. Hypergenesis, Scapeshift, All-In Red, Doran and Zoo were all present. In the finals, Mori matched up against Masashiro Kuroda and his Hypergenesis deck. It was a close-fought match, but Mori seemed to be always one step ahead, and took the title in two straight games. Congratulations to Katsuhiro Mori, Grand Prix–Yokohama champion!

Kuroda untapped and thought hard. Eventually, he decided the time was right. He played a forest and cast Demonic Dread, cascading into Hypergenesis. They matched plays: 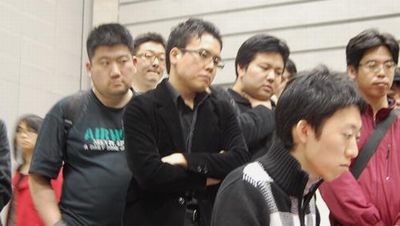 The big elephant stomped on the Jitte, Isolation and Kuroda's own Gemstone Mine. The Hellkite burned down the Hierarch and Nacatl. Honnami untapped, drew Tarmogoyf and played it, holding back.

Kuroda's team crashed in. Honnami's two elephant tokens teamed up on the Terastodon with help from Lightning Bolt. Honnami untapped and passed it back. The Hellkite came in again, and this time he dropped Temporal Isolation on it. Kuroda had a ready answer: Violent Outburst into Hypergenesis. Angel of Despair came to his aid, and unable to answer the two huge fliers, Honnami scooped. 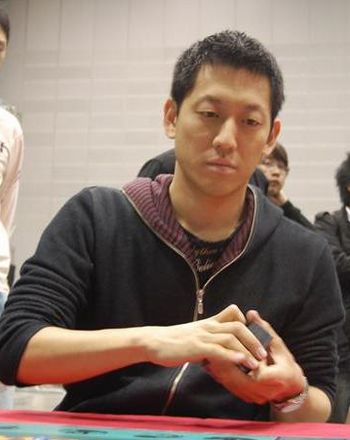 Honnami didn't like the looks of his opening hand and mulliganed to six cards. Kudora didn't waste much time deciding to keep his hand. Honnami's six were three Wild Nacatl, Tarmogoyf and two fetchlands. A great hand, but not against Hypergenesis. He went to five. They were Blood Moon, Magus of the Moon, Tarmogoyf, Wooly Thoctar and Arid Mesa. He frowned and kept.

Kuroda hit three land in play before Honnami found a second. He played out Tarmogoyf and gave it back to Kuroda. Kuroda played a fourth land and pitched a Spirit Guide to play a full-price Shriekmaw. Honnami replaced his ‘Goyf with a Wild Nacatl, but Kuroda had a second Shriekmaw and a Forbidden Orchard for his fifth land. He hit for three and passed the turn.

Honnami Bolted the untapped Shriekmaw and gamely hit for one. Kuroda was happy to keep pressing 3 damage at a time. Honnami traded his token for a forest with Path to Exile, and suddenly his hand was live. Unfortunately, he didn't have an answer for the Shriekmaw that was gobbling his life total. He played Magus of the Moon but even that couldn't lock Kuroda out completely, as he had a basic forest in play.

Honnami's life fell. Seven. He played a Wooly Thoctar. Four. He cracked back for seven and played Knight of the Reliquary, looking to edge out the race. Kuroda swung in and tapped three for Violent Outburst, the +1/0 enough to take the match.

Things did not start auspiciously for Ishihara. He went down to six cards, and then five, and even those were nothing to celebrate. Mori got a look with Thoughtseize: In addition to the Stomping Ground in play, Ishihara had another Stomping Ground, Sakura-Tribe Elder and two Cryptic Commands. Mori stripped the Elder. 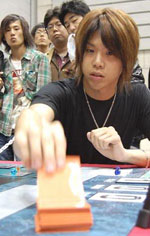 From there, it was downhill fast. Mori played out Thopter Foundry, Dark Confidant, then Vampire Hexmage with Dark Depths. That was enough for Ishihara.

Another mulligan plagued Ishihara, and he stayed on six. He started by suspending Search for Tomorrow. The two played lands, and on Mori's second turn he floated two black and played Thoughtseize. Ishihara's hand was Remand, Scapeshift, Dead // Gone and Steam Vents. Mori took Remand, then followed up with Duress for Dead // Gone. 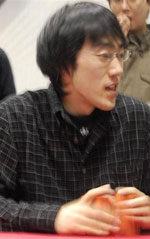 Search came off suspend and got Ishihara an island. He played Ponder and passed the turn. Mori played Sword of the Meek. Ishihara played a land. Mori Thoughtseized again, this time taking away Scapeshift, leaving Ishihara with a newly-drawn Dead // Gone. Mori transmuted Muddle the Mixture for Thopter Foundry.

Ishihara drew and passed. Mori plucked a Duress and caught Ishihara's drawn Rude Awakening. From there, Mori played it slow, building a board with Jace, Extirpating Ishihara's Scapeshift, and then finally putting down his Thopter Foundry. Ishihara failed to draw a miracle, and the thopters did him in. 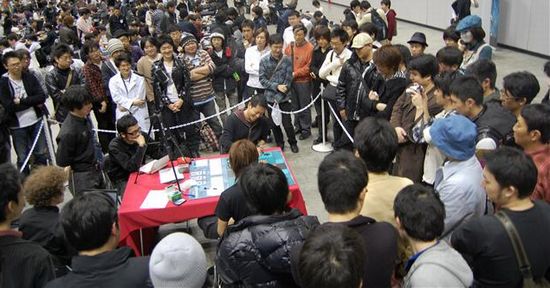 As the two shuffled up for the match you wouldn't think from their attitudes that it was for all the marbles. They laughed and joked with the crowd, and looked completely relaxed. Of course, after exchanging their good luck wishes, they were all business.

Kuroda played Calciform Pools and gave it back to Mori. Mori played Thopter Foundry, and after Kuroda played a Forest, teamed it up with Sword of the Meek. Kuroda continued to draw and play lands, looking for a cascade spell. Mori transmuted Tolaria West for Ghost Quarter to stop Kuroda from building up counters, and made himself a thopter to start attacking with.

Both players played land, go, and then Kuroda found an Oblivion Ring and aimed it at the Thopter Foundry. Mori used his free mana to make four more thopters. Still Kuroda had no action. A Thoughtseize forced his hand: He pitched Simian Spirit Guide and drained his Fungal Reaches to cast Bogardan Hellkite, blowing away four thopters. His hand was two Terastodon, Akroma's Memorial and Hypergenesis. Mori took one of the elephants and showed the Thopter Foundry he'd just drawn.

When Kuroda's next draw yielded nothing of value, they were on to Game 2. 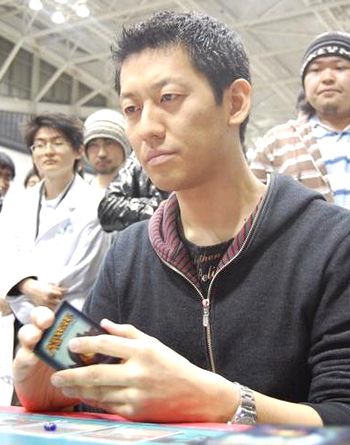 Kuroda untapped and drew. He played his Orchard and passed the turn. Mori played a third land and passed it back. Kuroda drew and played Reflecting Pool, and Mori paused at end of turn, considering a Thirst for Knowledge. He bit.

Kuroda tapped three for Outburst into Hypergenesis. First came Bogardan Hellkite. Mori played out Dark Depths. The mystery card Kuroda had drawn was Angel of Despair. Mori added Island and Confidant and they were done. The Hellkite shot down the Confidant, and Kuroda destroyed Mori's Sunken Ruins, leaving him with just a single source of black. 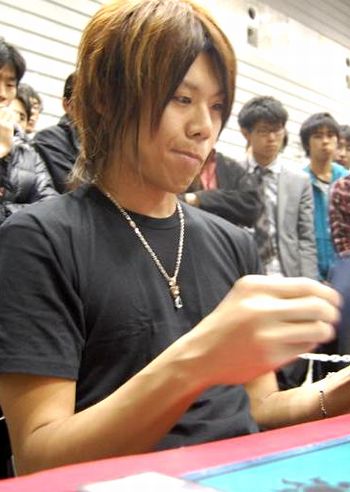 Mori resolved his Thirst for Knowledge, drawing Chrome Mox, Vampire Hexmage and Island. He thought about keeping Mox and Vampire Hexmage in hand, but eventually chose to pitch Chrome Mox. He untapped and ripped Tolaria West, transmuting it into Urborg, allowing him to play his Hexmage with the help of Dark Depths. Kuroda's face fell.

He sat back on his two fliers and watched Marit Lage hit play. It swung in and the Hellkite chumped. Kuroda drew and passed the turn, blunting another assault with his Angel. Mori stood at just fourteen life, and had no blockers. Kuroda tapped three for Outburst into Hypergenesis with Terastodon in hand. Mori Thirsted in response, and allowed it.

Terastodon hit play and blew up Kuroda's lands, giving him 18 power of attackers and a lethal attack. Mori smiled and showed him Echoing Truth. Kuroda extended the hand.