"Where every match is a feature match"

Guilherme Dei Svaldi's homemade deck, the product of more than four months of hard work, gave him the Grand Prix title. Could this be the beginning of a new Extended archetype?

Welcome to the Magic: The Gathering Invitational 2000. Besides having a new name, the all-star game of Magic adds a few new twists (a new host city, a new format, a new finals competition, and eight first-time invitees) in its fourth year.

The core of the tournament, though, has remained the same. Sixteen of the top Magic players in the world (based on performances in key tournaments, composite DCI ranking, and a fan ballot) have been invited and flown to Kuala Lumpur, Malaysia. Here over four days, they will compete in a fifteen-round Round-Robin tournament (with each player playing each other player once) with five different formats. The top two finishers will compete in the finals, playing a match of each of the five formats.

The winner of the event will earn the right to design their very own Magic card (Avalanche Riders from Urza's Legacy and Rootwater Thief from Nemesis were designed by previous winners), get an invitation to next year's Invitational, and win the ultimate bragging rights.

Join us for the next four days as we bring you ongoing coverage of every round of this exciting tournament. 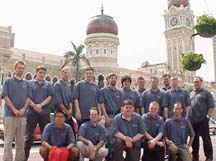 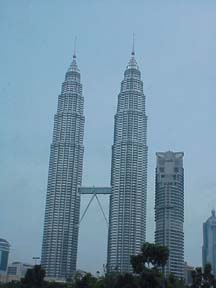 The Magic: The Gathering Invitational 2000 was held at the Sunway Lagoon Mall

Congratulations to Chris Pikula, winner of the 2000 Magic Invitational!