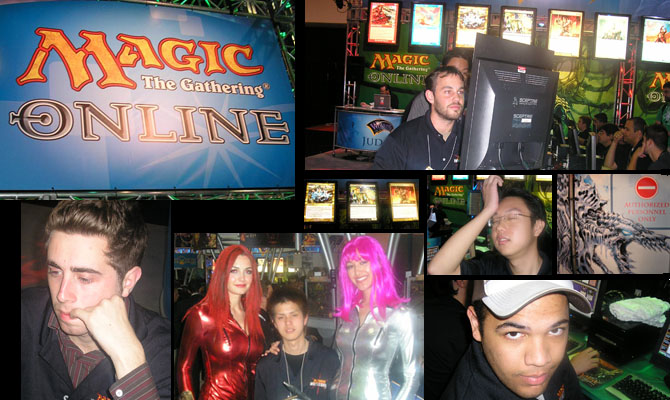 Ruel and Cunningham split the first two matches of the finals, putting the deciding match in the hands of the Auction of the Geniuses decks. Both players went undefeated in the round-robin portion of that format, but Ruel had a little extra mojo working for him. His deck was designed by the Meddling Mage himself, and Chris Pikula took the spirit of the event to heart by packing his creation with four copies each of himself, Bob " Dark Confidant " Maher, Jon " Shadowmage Infiltrator " Finkel, and Kai " Voidmage Prodigy " Budde.

In the end, Jeff's Fujita-created Teysa deck couldn't gain traction against the Invitationalist Special in a tight three-game match. Los Angeles continued to be a lucky city for Ruel, as he followed up his Pro Tour-Los Angeles 2005 victory with his win here.

Ruel now earns the right to create a Magic card with his likeness on it, so be on the lookout for the flip card Bibi // Sleur in an upcoming set. Congratulations to Antoine Ruel, the 2006 Magic Invitational champion!

"I would have played this in real life," noted Antonino de Rosa, "but it costs two hundred fifty bucks."

It turns out that depending on how you do your building, Magic Online can't quite handle it either. Some players tried to use a view where their entire card pools were on the screen at once, and that proved to be just a little too much for the Magic Online picture-rendering engine to handle. Magic Online would try in vein to fill in all the pictures, only to have about half of them blank out again about 80 percent of the way in and then have to start over again.

If a computer can't keep all these cards in its head at once, what chance does an ordinary man have? Clearly good searching tools are required, and the players are finding out that, at the Invitational, one skill they didn't know they needed was how to use their interface in powerful but less known ways to sort out the good from the bad and the ugly.

With each player only playing three matches, it can be difficult to draw conclusions. In years past, the metagame of months of Standard has been shaped by players who essentially relied on the outcome of one or two matches to tell them which decks were good and which decks were bad. That's dangerous, but if you look at the results and watch the games, you can still get a pretty good overall picture of what happened. 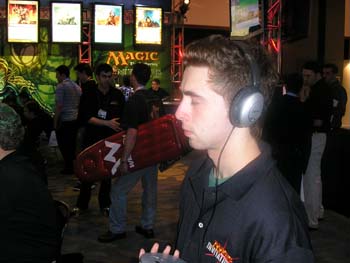 Blue-green Madness has been strong in many formats, up to and including Extended (and some would even say Vintage). Its cards are amazingly efficient and it poses serious problems for just about anyone in its path. Against it, many other decks looked clunky and slow. In its own block people found the tools to handle the deck, and the Cabal Coffers decks from Odyssey Block had a good (but not great) matchup against it, but in the time frame we're drawing from this was still the block deck to remember and the block deck to beat.

Jose Barbero took it to a 3-0 record, deck expert Jeff Cunningham was 2-1 and so was Terry Soh to put the deck at a combined 7-2 in its various forms. Cunningham's build looks rather bizarre at first glance, including two AEther Burst s in the maindeck with the other two in the sideboard, but his games showed many of his choices to be just what he needed, especially his unusual Elephant Guide s.

As Jeff Cunningham approached Odyssey, De Rosa looked over and said, "You know he opened Wild Mongrel . He has one in every format." 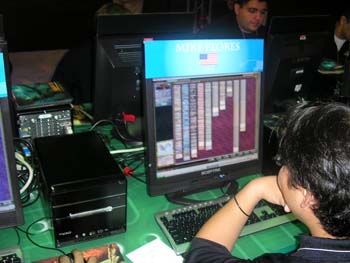 Flores ponders his enormous cardpool. Mark Rosewater walked over and proposed this question about duplicates. What is the most of a single card that you can get? My feeling is that Stone Rain shows up most often in this set of packs but how many are possible? Is it really the most frequent?

The whole idea of Decadent Sealed came from the original format of Decadent Draft. Often R&D has extra product lying around and what better way to use it than to come up with new formats? If you and your friends decide that you want to do something ridiculous just do a Decadent Draft! Take a booster box of your favorite set and open it pack by pack taking only 1 card from each pack for your deck. At the end you will have 36 cards (1 per pack opened) and a crazy powerful deck.

As the players continued to open their packs, early reactions were mixed. Karsten felt that he had no clue for what to do in the format. He got excited to discover two Core Tapper s but didn't have any other uses for charge counters. The always quotable De Rosa said, "Imagine how hard it is to build a deck for this format, now imagine you have Harrow , Rampant Growth , Lay of the Land and four other mana fixers. All I can say is that I'm tempted."

Cunningham was one of only three players in the running for the finals. He didn't seem to pleased with his card pool, noting that he didn't get any Jittes or any real bombs. Sitting next to him, Mike Flores was happy to get both Umezawa's Jitte and Rorix . Will he fight his way to mediocrity?

Antoine Ruel felt that discard would be a good way to win in the format and put together a red-black deck with multiple discard spells. If he manages to clinch a final berth, he built a very special Battle of Wits deck that he could sideboard into even though he only has one Battle of Wits and no way to search for it.

Gabriel Nassif didn't mess around, showing off a Blaze and a Fireball . His only decision was to either play mono-red splashing black or vice-versa. Julien Nuijten had a funny problem – he didn't know what Rampage did. Randy Buehler helped out by letting him know, "It's Bushido, but worse."

Checking in one final time with De Rosa, he told Paul Sottosanti that he was going with the "Turian" build. De Rosa built a straight red-white beatdown deck, with even the bomb Rout dumped into his sideboard.

Is Decadent Sealed a poor man's constructed or rich man's limited? Could a format this expensive be poor man's anything?

This is the first time this format has been played, but one pattern has emerged as red, black, and blue rule the day. White and green aren't totally shut out, but most players are taking the traditional removal-centered view of the world and playing with black and red, often backed by blue control cards.

It seems that white and green are either being overlooked or are difficult to take full advantage of in a format like this. One way of viewing this is that while white and green are good at being solid and have constructed-level strategy, they don't get as much out of the extra packs as the removal colors do: Their cards rely on synergy while removal cards are their own synergy. They're also less focused on bombs, with their high ends less high than those of the other three colors.

Of course, it's not only possible that probably that players will be sideboarding into totally new decks between games so perhaps the other colors will be making a comeback soon.

For years, Mark Rosewater would run the Question Mark game at every Pro Tour stop. He was good enough to provide some fun trivia for all of you to do while waiting for the next feature match to start.

1. How many formats were played at the first Invitational?

2. What player had the widest gap between Invitationals?

3. The first Invitational was played in Asia. Other than Antarctica, which continent was the last to have the Invitational hosted there?

4. What format has been played at the most Invitationals?

5. Which winner's card took the longest to see print after their win?

6. Where was the first Invitational originally planned to take place?

7. What players have played in the finals of two Invitationals?

8. Of the nine printed winners' card, how many have the creature type Wizard?

9. What person has attended the most Invitationals?

10. What printed card was the closest to the card submitted by the player?

With only the collector's number of the Invitational card, can you match the card to its collector number?

With the Invitational coming to a close, we thought a guide to the best matches of the weekend would be in order. With hundreds of games to watch via replay in Magic Online, who better to provide a guide than the players themselves!

Mike Flores recommended watching the games he played against Terry Soh in Duplicate Sealed. He felt it was some of the best Magic he played all weekend. Flores used Dimir Guildmage to deck Soh not with the card-draw ability but instead with the discard ability of the Guildmage. He figured out that he needed to force Soh to discard Bone Harvest in order to be able to win with decking.

At first Frank Karsten couldn't pick out a match to feature, but with a little prodding the floodgates opened. There are pictures of his match in Block Party vs. Nuijten, but he says that the games were some of the most intense he played. Also, check out his Mirage-Visions game vs. Pierre Canali where Canali gets around a Karsten Power Sink with ... Dark Ritual !

Occasionally due to the number of players on Magic Online,, we have been seeing a little lag. Karsten relayed a funny story in which he is playing Dave Williams in Mirage-Visions draft. Williams knocked Karsten low on life with his creatures, and Karsten worried that Williams had Kaervek's Torch. Williams starts tapping his lands, then Karsten sees a couple of Dave's lands untap. Karsten was thankful that Dave untapped his lands. Next thing Karsten knows Dave was getting up and walking over to Frank to talk to him. Everybody gathered around Karsten when finally the Torch shows up on Karsten's screen! Karsten described it as the best slow roll ever.

Antonino De Rosa was proud of the Auction of the Genius match against Nassif in which he took double Spincrusher up against Meloku and won. He also relayed a story from Duplicate Limited in which Jose Barbero cast Sudden Impact on De Rosa to kill him. In response, De Rosa played One with Nothing to discard his hand! To make it even sweeter Barbero lost his Adamaro, First to Desire.

Osyp Lebedowicz showed how silly Decadent formats can be when in consecutive games against Barbero he burns him out. In Game 1 Osyp uses a Torch followed by a topdecked Drain Life , and in Game 2 Osyp led with Drain Life and followed it up with a topdecked Kaervek's Spite .

Tsuyoshi Fujita taught Osyp a lesson for playing burn in Decadent Sealed. Fujita would have burned out by Osyp but had out two Benevolent Unicorns. The spell damage prevention of the Unicorns saved Fujita from a similar fate as Barbero.

For the Decedent Sealed, Nassif went with the unusual strategy of playing 60 cards. In his round 13 match against Pierre Canali, having extra cards paid off as Nassif decked him. He knew that he only needed to play 40 cards but he felt as if his deck did nothing with a mere 40. With so much card-drawing and cycling cards, he felt like he should go with a bigger deck and chose 60 because that made the deck feel Constructed. His record in the three rounds? 3-0.