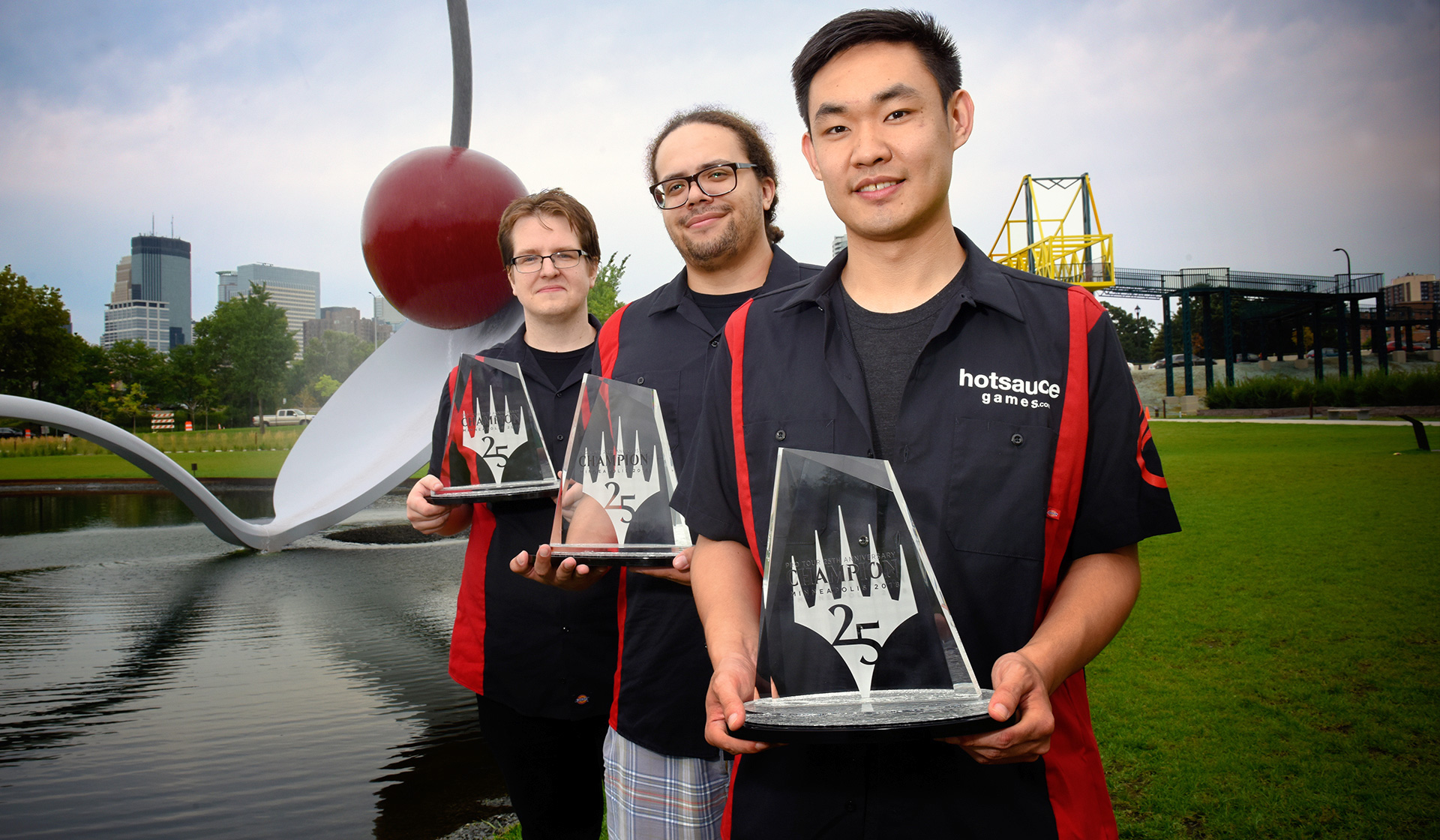 THE HASHTAG FOR PRO TOUR 25TH ANNIVERSARY IS #PT25A. JOIN THE CONVERSATION.

See Pro Tour 25th Anniversary as it unravels on the Magic: The Gathering Facebook page!

Mainstays of the Pro Tour for the last two seasons Ben Hull and Gregory Orange of Hotsauce Games sought out a third for Pro Tour 25th Anniversary’s special Team Trios Constructed format. In that search they found Allen Wu, Grand Prix Albuquerque 2016 champion and New Mexico native, who joined their squad as the Legacy pilot, content in letting him play with the deck he knows best while Hull focused on Modern and Orange sleeved up his staple archetype of choice: Blue spells in Standard.

The team entered the tournament strong, battling through a challenging field in the two days of Swiss rounds to be among the top teams playing for a spot on Sunday in the fourteenth round. In the elimination rounds, they blasted past the Belgium squad of Christophe Gregoir, Branco Neirynck, and Thomas Van Der Paelt to go up against the Pro Tour Hall of Fame squad of ChannelFireball in the finals: Josh Utter-Leyton, Ben Stark, and Martin Jůza.

After a hard fought series, Wu ready and waiting, their team up a match, it was Ben Hull’s Hollow One deck against Ben Stark’s Ironworks Combo that was the decider. A Leyline of the Void left Stark low on options as Hull’s creatures amped up pressure, earning Hull—and his teammates—the handshake from the ChannelFireball squad.

The team of Wu, Hull, and Orange cemented themselves in Pro Tour history with their win at Pro Tour 25th Anniversary, winning $150,000--$50,000 for each player on the team—for their victory. All three players will be invited to compete in the 2018 World Championship in Las Vegas, Nevada 2018 as well.

The finals was also the decider of the 2017-18 Pro Tour Team Series, with Hareruya Latin and Ultimate Guard Pro Team earning the right to compete in a Guilds of Ravnica Team Sealed finals on September 23 at the 2018 World Championship.

All in all, one million dollars was awarded in one of the Pro Tour’s biggest weekends, with dozens of legends in attendance, plenty of action, and three fresh Pro Tour champions.

It’s been a great 25 years, and the next 25 will hold plenty more memories, stories, and fantastic Magic.

It would be impossible for any one tournament to capture 25 years of Magic history in a single weekend, but we packed Pro Tour 25th Anniversary with as much Magic and nostalgia as we could. Not...

As the Pro Tour Team Series nears its conclusion, Hareruya Latin already has a commanding lead thanks to their finish here this weekend, but if ChannelFireball can both win their semifinals...

Coming into Pro Tour 25th Anniversary, there were dozens of teams loaded with superstars. Players with Pro Tour titles. Hall of Famers. Players in contention for current best in the world. Teams...

Both Stanislav Cifka and Jason "Amaz" Chan have had to topple some of Magic's brightest names to ever grace the Pro Tour Hall of Fame to make it to the Silver Showcase finals this morning, with...

by By Event Coverage Staff

The Silver Showcase gripped viewers on Thursday when players opened some of the only remaining sealed Beta booster packs in existence, and the quarterfinals Friday after the first day of the Pro...

Vengevine is one of the most unique Magic cards ever printed. The Rise of the Eldrazi Elemental was a hit alongside Fauna Shaman during its time in Standard and has only grown more powerful since....

Death's Shadow was something of a revelation when it hit Modern. It was always a kind of "almost there" card since its original printing in Worldwake, but it took years and Josh Utter-Leyton to...

With a hearty 25 years of Magic under our belts now, we've seen many different deck archetypes come and go. Some archetypes are more persistent than others and undergo significant evolution over...

The hallmark of the Standard format is change. New sets come out, new decks are created, and established decks receive major upgrades. Rotation happens once a year and everything changes. Cards...

Players from the Past

We all know of someone who once played Magic more then than they do now, but the little secret inside us all is that you never really quit. Not really. You eventually get the urge to shuffle up...

ChannelFireball’s trio consisting of Josh Utter-Leyton, Ben Stark, and Martin Jůza are the last remaining team at 7-0 at the end of Day One at Pro Tour 25th Anniversary! Tune in to twitch.tv/magic on Saturday starting at 9 a.m. local time (7 a.m. PT/10 a.m. ET/2 p.m. UTC) for seven more rounds of action to see if the ChannelFireball team can maintain their lead!

It's not every day you get to see a Rochester Draft using three packs of Beta, one pack of Legends, and one pack each of Arabian Nights and Antiquities. Check out the decks from the eight...

When I stop to think about how I was a teenager when I cracked my first pack of Magic cards, but that I also turned 40 earlier this year, I realize that not only have I been playing Magic for more...

Dan Ward has been disqualified from Pro Tour 25th Anniversary. Since this is a team Pro Tour, his team was disqualified as well. During Round 7, Ward's opponent activated Æther Vial. Ward...

Core Set 2019 has hit Standard, and for the next two months we'll have the largest Standard card pool possible, as Nicol Bolas, the Ravager comes to lord over us all. Well, the big Dragon will...

Modern has been a hugely popular format for years now, and earlier this year it made its return to the Pro Tour after a long hiatus. While that tournament helped to establish a metagame—it was...

The Sock Homage to Garfield

People often considered true visionaries are also sometimes known for their tendency to adopt unusual dress practices, like endless wardrobes of the same outfit so they don't have to waste mental...

25 years after the birth of Magic. The first team Pro Tour since 2006. The first time Legacy has even been a feature format at the Pro Tour. More than 400 players are here to compete for their...

Tomorrow, I'll board a plane to Minneapolis, Minnesota, to cover Pro Tour 25th Anniversary. On Thursday, August 2, the $150,000 Silver Showcase kicks off the action with a once-in-a-lifetime...

Magic. A game—no, wait, the game—truly without peer. Games have been played, thought about, and created for as long as humans had the wit and leisure to do so. Our good fortune, taking the...