Delila isn't very good with computers. Now into her 70s, technology isn't her forte; navigating the intricate world of online content isn't easy for anyone, even on the best of days. Still, she gives it her best. She's learned the basics and can usually eventually get where she's trying to go: http://www.twitch.tv/magic.

That's where she finds her family.

Jess always taught his boys a simple mantra: Work hard. Play hard. Live life with passion. When the kids were younger, that was an easy lesson to instill. He taught them to live that creed in every interaction in their lives, and he reveled in putting challenges in front of his kids to overcome—which they regularly did, attacking with a passion that Jess imparted on them through osmosis if nothing else.

When the kids began playing Magic, Jess was happy to encourage them to tackle another puzzle to solve. And attack it they did, so much so that what began as a hobby when Jess drove them to their first major tournament soon became much more. It took them to far-away locales and become their primary hobby, the activity that most days they jumped into immediately after getting home from work. Before long, real success had begun to come, and Magic suddenly seemed more important than a career. What if, they began seriously asking, it became a career?

That's when Jess discovered that it wasn't just his kids who had challenges to overcome.

"It was never the path I envisioned their lives taking," the man who can only be described as jubilant said in an uncharacteristically somber tone. "They want to play a game instead of work a 9-5? Creatures, lands, planeswalkers, how do you explain that when people ask what your kids do? As a father, I wanted what was best for them, and I was leery that this couldn't be it."

It was a trying time for everyone. The odds of success were slim, and while Jess wanted his children to be happy, there was no guarantee that chasing the life of a Magic pro would bring that. There were days where things hit a low, months where rent would go unpaid. There was every possibility that things would end in disaster.

What does a father do in a conundrum like that? If you're Jess Nelson, you fall back on what you know. And you take your own advice.

"It was their heart and enthusiasm that brought me around," Jess explained. "To see their passion, the passion I always encouraged them to chase, how could I say no to that?"

By now, you know Brad Nelson. 2010 Player of the Year and perennially in the conversation of best Magic player around. If you don't know his brother, Corey Baumeister, you soon will. The ball of energy with the wild hair, he's probably the top up-and-coming player in the world. He's gone from no major accomplishments to locking Gold status in the Pro Players Club in less than a full season, and he's diving full-on into competitive Magic alongside older brother Brad.

And now you've met their father and grandmother.

It's one of the tightest—and certainly most lively—families involved with Magic. It may have taken Jess some time to come to terms with Brad's decision to make Magic a career all those years ago, but when he did he jumped in with a fervor that might have been unexpected by anyone from the outside looking in but was not in the least bit shocking to anyone who knows the firebrand. He was there when Brad won the Player of the Year title in a 2010 playoff match in Paris, France, against Guillaume Matignon. 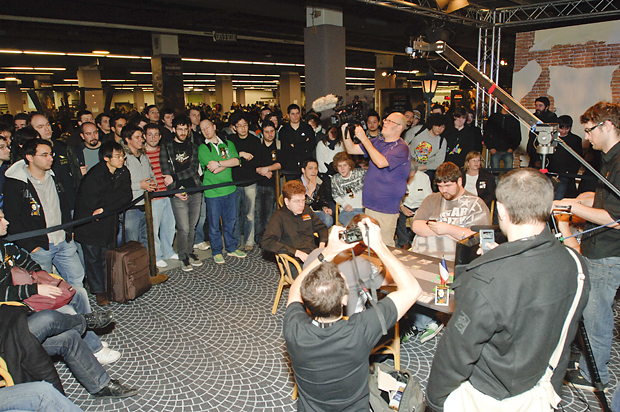 Jess and Corey were on hand to watch Brad win the 2010 Player of the Year title.

Someone else was watching that match as well: grandmother Delila. She religiously watches Magic coverage in tournaments where Brad and Corey are competing, even if that means waking up early enough to compensate for a 7-hour time difference. Brad estimated she watches more Magic streaming than 90% of viewers, and she does so with a laser focus that doesn't require she know the rules. Are her grandsons playing? If so, she'll be tuned into Twitch to watch.

Delila is best described as the pillar of the tight-knit family, standing tall and strong despite the wheelchair that brought her to Pro Tour Amonkhet to watch her grandchildren play Magic in person for the first time. She's been a constant in the lives of her progeny; it was at her house that a young Brad first discovered Magic Online, which he dove into every day after she picked him up from school.

Brad's career has seen plenty of ups and downs, but Delila has always been his rock—as she's been for his entire life. She knows the path he's chosen doesn't come with worldly prestige or fortune, and that many might look down on the lives her grandsons lead.

"My family always had to struggle, and we never had much. The way I see it, if you can find something that you can do that you like that's easier than the way we had to work, then go for it," she explained in the book Grinder: The Brad Nelson Story by Rich Hagon.

With her blessing, Brad and Corey certainly have done that. Nelson is renowned worldwide as one of the best deck builders and thinkers in the game, while Corey's stellar emergence has been marked by tight technical play that Brad proudly proclaims better than even his own.

"Without knowing anything about Magic, she's always been our biggest fan," Brad says with a smile anytime the subject comes up. "She's the one who watches every minute of coverage, texts the rest of the family updates on how we're doing and tells them to turn on the stream if we're ever on camera. Having that kind of support is just wonderful."

And yet, until this weekend Delila had never been to a tournament. Outside of that trip to Paris, Jess's own appearance was a rarity as well.

A family tragedy has changed that.

As you might have guessed, Delila doesn't mince words. When the subject of her son's—and Jess's brother's—death a few years ago comes up, she is direct.

"It is the worst thing that can happen, to lose a child; I wouldn't wish it on anyone," she said. "It was one of the hardest times for us as a family, and it really changed us."

That change is clear: it's brought them closer together.

"Time is fleeting, and as I've gotten older—and hopefully a little wiser—I've learned that," said Jess, reflecting solemnly on the past while still conveying his trademark infectious enthusiasm. "After my brother passed, I decided, why not travel and explore places with my family I would never have been to otherwise? The point of life is to make memories, and I want to make memories with my family. That time is gone with my younger brother, but I still have my sons and my mother, and I want to take advantage of these opportunities as they come."

That's what has led Jess and Delila to Nashville, the 10-hour drive well worth the chance to watch her grandsons play the game that they've poured all of themselves into and has given them back so much in return. It's a chance to attend the Grand Ole Opry that Delila has always dreamed of, and it is in many ways the culmination of a family journey that began so many years ago when Brad won his first major tournament. Or maybe it began when he first typed "Magic Online" into his grandmother's computer. Or maybe it began much earlier, when a father who is comfortable enough to laugh freely when the photographer pulls out a surprise rubber nose and in the same breath can talk about the tough lessons he's learned from the hardest moments in his life, taught his sons to never stop chasing their dreams.

"When things for me were tough, my father said something that stuck with me." Brad recounted, "And I remember this vividly—he said, 'I've never taken a lot of chances in my life. Playing it safe isn't for everyone, and I'd love for you to take your chance."

A father's faith, a grandmother's devotion, and two resilient kids who grew into two worthy role models for the next generation of Magic players.

How's that for living life with passion? Jess and Delila made the trip to cheer on Brad (left) and Corey (right) in person at Pro Tour Amonkhet.