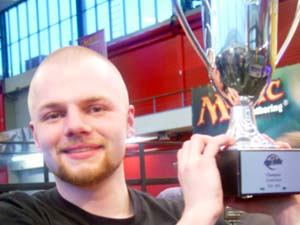 Nicolai Herzog is the Pro Tour - Amsterdam champion! After fifteen rounds of competition he and seven others got to draft one more time for all the marbles. Herzog was in first seat, and his prayers were answered when he saw Molder Slug staring back at him from his pack. He never looked back.

First to feel the pain was Pro Tour - Los Angeles champion Farid Meraghni, whose appearance confirmed his place as one of France's best. Then he took down Olivier Ruel in three straight, after the frenchman busted Iron Mike Turian in the quarters.

On the other side of things, Osamu Fujita was clobbering hometown hero Kamiel Cornelissen and Anton Jonsson was forcing the exit of Canadian Rookie Aeo Paquette. Everyone had their money on Jonsson on the semifinals. He'd 11-0'd to start off, and he'd done endless online drafts. He had an arsenal of bombs. But in the final game, Fujita edged out a win.

Sitting down to the finals, it was clear Herzog was hungry for the win after Kai Budde snatched the trophy from him in the finals of Pro Tour - Chicago. This time he was not to be denied. He swept Fujita, forcing Japan to wait at least another month for their first Pro Tour Victory. Congratulations to Nicolai Herzog, Pro Tour - Amsterdam Champion!

Don't worry if you missed any of the action, all the videos are available here for your enjoyment. Relive all the excitment of the Top 8. And be sure to tune in next month for Pro Tour - Kobe, where Sunday's matches will be delivered to you live!