A Column You Say…

am sorry, Mr. Editor, I fully intended to bring you a breaking story from here in Valencia, Spain, where we have been furiously working to get everything ready for the live webcast of Pro Tour Born of the Gods. I hope you will accept this note to explain why I was not actually able to write this week's edition of The Week That Was.

I landed yesterday afternoon and spent most of the day wandering around in a jet-lagged haze trying desperately NOT to fall asleep. I was well past the twenty-fourth hour of being awake—I had not been able to fall asleep on the plane at all—but I knew that going to sleep any time before a "normal" bedtime would be potentially disastrous. 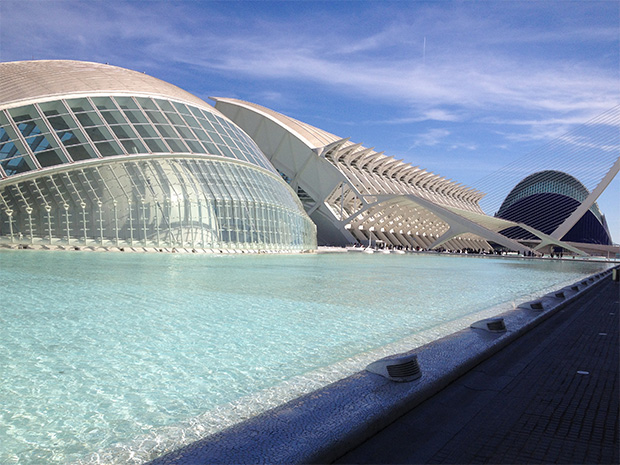 The venue for Pro Tour Born of the Gods.


Lost in all the star power surrounding the big successful teams like ChannelFireball and The Pantheon is that they arrive in the city of the Pro Tour more than a week in advance of the event—sometimes as many as two weeks—and get acclimated to the time zone, which lets them be at as close to peak performance level as you can get when you are six or nine hours off your normal time. Many players don't have that luxury, or perhaps don't see the value, but playing in a Pro Tour is a grueling mental gauntlet that will push any Magic player as hard as he or she has been pushed, round after round.

For a long time, ChannelFireball was the only team taking that step and that operational edge was a significant one. Significant enough that teams like The Pantheon—with the most experienced of veterans in Jon Finkel and Kai Budde—have followed suit. I was quite jealous of the utter lack of exhaustion on the faces of Luis Scott-Vargas,, Paulo Vitor Damo da Rosa, Ben Stark, Brian Kibler, Shuhei Nakamura, Kenji Tsumura, Frank Karsten—yes, that IS seven Pro Tour Hall of Famers on one team—and the rest of the ChannelFireball team, as Marshall Sutcliffe, Zac Hill, and I dragged our barely reanimated corpses into the hotel lobby.

There was conceivably a window when I could have written this column yesterday, but I fully expected to do it the next afternoon after our staff meeting—pretty much the typical time such things get written. The problem here was there were five other people feeling as bedraggled as I was and they had decided that a booster draft was the only thing that would keep them upright until it was time to go to dinner. And who can pass up an opportunity to do research for the Pro Tour?

I went into the draft with an eye toward the Black-Red Minotaur deck and had the perfect window to try it out when I picked up my preview card—Felhide Spiritbinder—which I had not had the chance to play with previously. The deck turned out to be pretty solid—better than it looked to me as I laid it out—and the Spiritbinder was simply amazing. It copied everything from my opponent's Disciple of Phenax to his Abhorrent Overlord. On the common side of the spectrum, Kragma Butcher turned out to be a premium common that was better than I first expected it to be when looking at the preview. 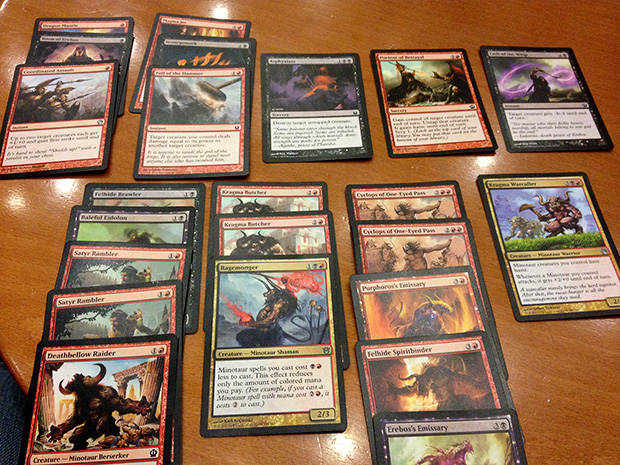 The Minotaur army is ready to serve.


I went 3–0 with the deck before we wandered off into the Valencia night in search of a dinner that would drag out long enough for us to come back to the hotel and fall asleep before heads hit pillows. I guess it worked out according the plan, because the next thing I knew I was waking up at a little after 9:00 and heading downstairs for breakfast. The breakfast buffet was a little like the high school cafeteria, with all sorts of Pro Tour cliques huddled up and getting fueled for tournament registration day. ChannelFireball was sitting at one table while a group of Japanese players—including Japanese commentators Osamu Fujita and Pro Tour Charleston Champion Tomohiro Kaji—sat at another. As the regular coverage team wandered in, we began to coalesce into a bigger and bigger table and we planned out our day. There were going be roughly two hours before we had to be on site for a couple of staff meetings to prepare for the weekend. I probably could have attempted to do my article in that window, but once again I found myself the difference between an odd number of drafters and the perfect number of eight.

This one did not turn out as well, record-wise, despite me liking this deck a little more than the one from the night before. In this deck, I got to try out Hero of Leina Tower—two of them, in fact—a card that has gotten mixed reviews from people who have had the chance to draft it. I was actually very happy with it and managed to win one game when God's Willing turned it into an unblockable 8/8. The deck was a little awkward, though—although there was more than enough of that to go around in this particular draft—and I only went 1–2, losing to Blake Rasmussen's green-blue deck and Rashad Miller's white-black deck. 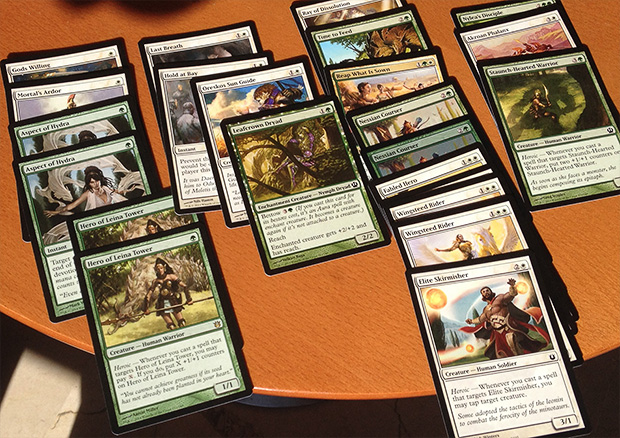 
Rashad played one of the most epic games of Magic against Marshall Sutcliffe in the first round of our draft. Marshall was playing a five-color ramp deck and both players cast and turned monstrous a Colossus of Akros. Rashad had bestowed his with Hopeful Eidolon while Marshall had done something similar with Celestial Archon. Sutcliffe stabilized his board when he was at 2 and Rashad was sitting at 170—yes, you read that right. Sutcliffe was eventually able to "downheaval" multiple creatures on Rashad's side of the board with Vortex Elemental and most of the lands in his deck. Bow of Nylea was alternating between rebuilding his life total making sure he did not get decked while Kiora built her way to a second ultimate activation.

By the time that match ended, every other permutation of players had completed their matches and it was time to head to the venue. It is the same site as the last time the Pro Tour came here and I have to say it looks a lot better bathed in sunlight than it did in rainwater.

The first two meetings of the day were to review stories we would be following during the weekend; review schedules for the booth, newsdesk, and tournament center; and make sure everyone knew where they had to be on Friday, to start bringing you live video coverage, from the very first draft on Friday through every game of every match in the Top 8 on Sunday.

The second meeting was to go over some changes for this event, which is once again going to be open to the public—and more spectator-friendly than ever before. The newsdesk and tournament center are in a fishtank of a set that will allow attendees to see how the sausage gets made throughout the event. There is also going to be even more surface area for watching your favorite players in action. The floor plan for the event includes smaller subsections of tournament seating podded off behind the rails, instead of one big tournament area as in past events.

Once our meetings were done we had to discuss wardrobe and beauty regimens with the event stylist—something new for this event—before we started doing a sound check and preparing slides for our preview show. Marshall and I then recorded a series of quick interviews with members of eight different teams at this event. I was particularly struck talking to Conley Woods about his move from ChannelFireball to TCGPlayer. He professed nothing but affection and admiration for his former teammates but admitted to feeling a little lost in terms of his role as a deck designer with the likes of Josh Utter-Leyton doing such amazing work. He described his decision to change tee shirts for this event as a personal quest to rediscover what he does best. I cannot wait to see what his new team—which includes Pro Tour Dragon's Maze champion Craig Wescoe and Modern master Ari Lax—does this weekend.

When those interviews were completed, it was time to shoot the preview for the event, which included talking about the various teams, formats, and cards that we expect to see plenty of over the course of the event—and my own personal quest to make Rich Hagon crack up at least once per video we did together. Finally, I was going to be able to finish up my column once we were done, but I was reminded that I needed to run back to the hotel to take part in a super top secret Walking the Planes skit.

I don't know if you have any idea how much work goes into what Nate and Shawn do, but those guys just kill it every time. Shot after shot get crossed off a master list. Reverse angles are shot for reactions and extra shots are stockpiled in case a scene needs spackling. Each is a master of his craft and they take care to get each line just right and looking perfect. I cannot wait for you to see the finished product, but you will have to take my word for it that it will be worth it.

It had better be, since by the time we were done it was well past dinner time and I had just enough time to scarf down a couple of energy bars and some minibar water while writing you this apology note, Mr. Editor. I am afraid I will just not have time to do my column this week. Maybe you can just rerun one of the roundtables from the past two weekends in its stead.

In the meantime, make sure to tune in at the time below for the start of the coverage. This event is shaping up to be a doozy!