A Courser of Action

hile the impact of Born of the Gods is certainly being felt in Limited, its impact on Modern has been more, well, limited.

Coming into the weekend, it was expected that a few cards had some potential for Modern play. We've had a Brimaz, King of Oreskos sighting and Searing Blood does an okay Searing Blaze impression, but no one expected the set to upend things as much as the bannings and unbannings have.

But one card few people were talking about has found a home in Modern thanks to Team Elaborate Ruse's updated take on Jund: Courser of Kruphix.

Jund has taken a lot of hits lately, from Bloodbraid Elf last year to Deathrite Shaman last month, and the result is that it hasn't been highly touted coming into this weekend. But if there's one thing you can count on, it's that you can't count out Jund.

Elaborate Ruse may have found the right formula for playing Black, Red, and Green, and it actually has only a little to do with Courser of Kruphix. That card came into the picture later. The card that really started them down this odyssey is pretty new to Modern itself: Anger of the Gods.

Now, while some of us have been including Anger of the Gods in our Grixis Control lists for some time (*cough* *ahem*), not everyone made that leap for this tournament. Elaborate Ruse was one of the teams that did.

"I went back to the hotel last night after registration and said 'we have to play Anger of the Gods,'" said Pro Tour Dragon's Maze Quarterfinalist Matej Zatlkaj. With so much Zoo and Melira Pod popping up, Zatlkaj knew Anger of the Gods could be a break in the format that made Jund a solid choice. 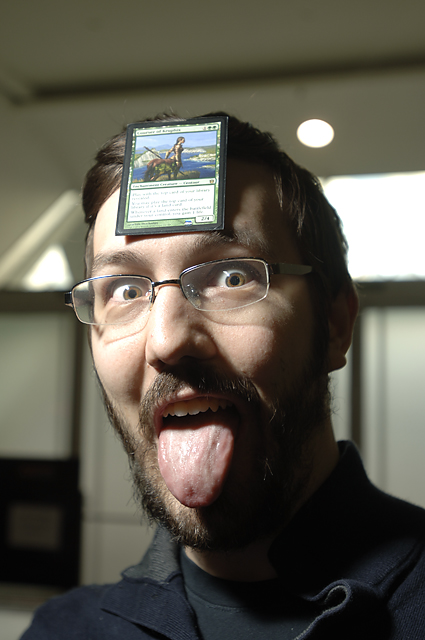 It's no elaborate ruse. Mataej Zatlkaj convinced much of his team to play Courser of Kruphix in Modern.

And, because Deathrite Shaman wasn't even an option anymore, almost all of the deck's creatures could dodge the sorcery and it could be played in the main deck.

Almost, except for a three drop spot the team was having trouble nailing down.

They had originally started on Kitchen Finks as a value card that could play offense and defense. The problem was, it wasn't doing much of either, especially facing down Tarmogoyf, where it was little more than a chump. So the team tried other options, even going as big as Thundermaw Hellkite in that spot. With the deck leaning on Anger of the Gods in a lot of matchups, nothing stuck.

Enter the 2/4 Courser of Kruphix.

Courser of Kruphix does so much more than survive Anger of the Gods. It provides a bit of extra life, helpful in a deck with weaknesses to Zoo and plenty of ways to deal itself damage. It blocks effectively, including against 3/4 Tarmogoyfs, it provides a bit of value, it adds to the card-type count for Tarmogoy (Elaborate Ruse probably has the most consistently 5/6 Tarmogoyfs in the room), and it combines with fetch lands to provide a measure of deck manipulation Jund doesn't typically have.

So far it has worked for Zatlkaj, who, through 6 rounds, is 3-0 with Jund and 5-1 with Courser of Kruphix in his deck.

How did he pull off that feat with three rounds of Limited to start the day? He opened it Pack 1, Pick 1, of course.