Five up and Five down in Theros

Born of the Gods, on the other hand, is more of a subtle switch from Theros. The strategies are largely the same. The archetypes changed a bit but didn't get complete overhauls, and there are a number of cards in Theros with close analogues in Born of the Gods (think Wingsteed Rider and Akroan Skyguard).

But not everything stays the same. Certainly some cards and strategies improved while others were left behind. With that in mind, here are the Top 5 cards that improved and Top 5 that got worse with the introduction of Born of the Gods.

5. March of the Returned

There were whispers that you could successfully draft a Black-Green self-milling strategy in Theros. There were other rumors that it was actually playable. Not many people believed it. Because it was, you know, not good. But with Satyr Wayfinder and a few other improved self-mill cards in Born of the Gods, the archetype went from virtually unplayable to, well, kind of okay. Tom LaPille, the set's lead developer, pointed specifically to March of the Returned as improving, though really, it's a stand-in for any deck that really wants Pharika's Mender and Nemesis of Mortals.

The first of several Black cards that took a hit, Read the Bones, once a solid mid-range pick in triple Theros, has fallen significantly in No. 4 Ranked Player Shahar Shenhar's estimation. Not only has Black gotten worse according to, well, pretty much everyone, but aggressive strategies have gotten better with several key new cards. It's much more difficult to take off a turn AND 2 two life and still hope to come out ahead, making it far more difficult to take the time to stop and read those bones. 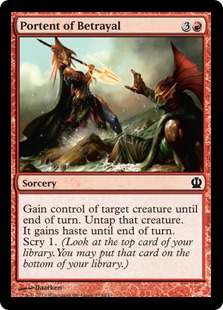 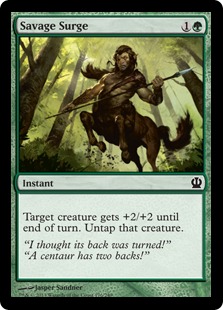 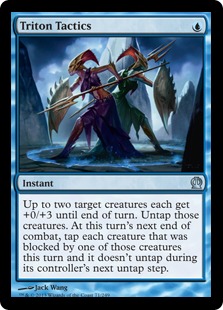 Those sneaky designers and developers at Wizards did some pretty ingenious seeding in Theros, including a number of cards that inexplicably untapped the creature they targeted. They looked, at first blush, like combat tricks with a bit of extra surprise going on. But it turns out they happen to combine nicely with inspire. Portent of Betrayal got a triple boost, according to No. 7 Rankd Player Tom Martell, because Red is better, the format is faster, and it happens to trigger inspire when you take your opponent's creature. Sounds more like Arbiter of the Less-ThAn-Ideal for its controller.

Hear me out. Wingsteed Rider itself didn't get any worse. It's still a very strong card for anyone in White. The problem, as several people tell is, is that heroic as a strategy, generally, got worse. Both No. 6 Ranked Player Sam Black and Pro Tour Gatecrash Quarterfinalist Melissa DeTora said heroic was a bit of a worse strategy thanks to a worse set of White commons, fewer cantrip enchantments in typical heroic colors in Born of the Gods, and worse, albeit cheaper, bestow creatures in the new set. You can still Wingsteed Ride your way to victory, but it has become a bit more challenging to do so.

Wait...didn't we just say heroic strategies got worse? How can a Heroic creature suddenly get better?

"The small, cheap bestow creatures make him so much easier to trigger, and he's so good against big monsters. And because the format is faster now, the trigger is much better now."

See, that's why we let him talk. He knows things.

Also, a faster format means there's more room for a Horned Turtle-style creature in the format.

It stands to reason that if you don't have time to Read the Bones, you really, really don't have time to Read the Bones, play a 0/4 and then read them again. With the format speeding up ever so slightly, you can ill afford to do too much nothing in the same game. You can do a little nothing, but Mnemonic Wall encourages doing a lot of nothing, meaning a lot of players are opting to ignore one of the few ways to give Prowler's Helm a use.

Several players, including DeTora and Black, pointed at the Minotaur deck as receiving a boost from Born of the Gods. Oddly enough, it has little to do with Ragemonger. Instead Kragma Butcher, the inspired 2/3 that becomes a monstrous 4/3 with regularity, has given the archetype its biggest boost. Combine this with the general quality of Red cards in Born of the Gods, and Minotaurs has become something to be feared.

Horizon Scholar stands, not too proudly, in place of all of the random six drops. It used to be that things like Vulpine Goliath and Horizon Scholar were fine if not spectacular ways to top out a curve. You were never happy to have to rely on them to win games, but it also wasn't the worst. Now, according to Shenhar, they're even worse. Poor Horizon Scholar.

Spark Jolt? That spell that deals one damage? That's what people think improved the most?

In a word, yes. More people mentioned Spark Jolt (and, to a lesser extent, Viper's Kiss) than any other card save the next one. It turns out Born of the Gods has more one-toughness creatures than Theros,including strong ones like Akroan Skyguard, ensuring that Spark Jolt has greatly improved from what it was before. Add in the general improvement in the Red cards available in the first pack of a draft, and you have the most impressively improved card in Theros.

Gray Merchant of Asphodel has several things working against it with Born of the Gods in the mix. For one, there are fewer Gray Merchants, meaning Black decks can draft them less reliably. For another, Black is fairly mediocre in Born of the Gods, and it's best card, Asphyxiate, doesn't even add to devotion.

For a third reason...there are fewer Gray Merchants!

Nothing went better with Gray Merchant than more Gray Merchants, but whole drafts can easily go by without seeing a single one, or the two that typically tilted a Theros Black deck from "good" to "great." And since Black didn't get nearly the support in Born of the Gods that it did in Theros, players find themselves backing away from the color slowly, shaking their hands even when the Grayest of Merchants offers them their wares.