o most people, Hall of Famer Kai Budde is the German Juggernaut, a Sunday killer, and one of the best players of all time. To his fans, he's a legend, a Magic player whose legacy is secure, and one of the greatest minds the game has ever seen.

To team CFB: The Pantheon, he's the cook.

Granted, that's underselling Budde's contributions to the team of all-time greats by quite a lot. He also does the grocery shopping. 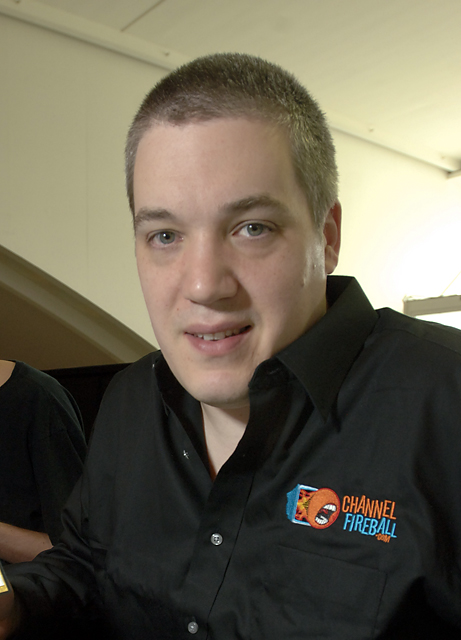 Hall of Famer Kai Budde serves as more than just an inspiration as one of the best. He's also his team's cook.

"It's great having him in the kitchen," said No. 7 Ranked Player Tom Martell, not even remotely being sarcastic.

Martell was, of course, merely highlighting one of the ways Budde fit into a team that Martell said was "all about chemistry" and people playing to their strengths.

But sometimes too many (figurative) cooks can spoil a stew, so many of the larger teams in attendance at Pro Tour Born of the Gods have players who have specialized roles either by design or default.

So the day before the Pro Tour started, we talked with representatives for eight of the largest teams competing this weekend to see who played what part in their preparation for this tournament. You can find full rosters for each of the teams here. What you won't find on that list, however, is the mechanics of how each team broke down their testing.

No. 1 Ranked Player Ben Stark, for example, serves as the Limited expert for Team ChannelFireball alongside No. 15 Ranked Player Martin Juza. No. 11 Ranked Player Stanislav Cifka came into Team Elaborate Ruse as the Modern expert thanks to his love of and vast experience with the format. No. 23 Ranked Player Craig Wescoe is and always will be the expert in all things small and White and ready to attack in any format ever, a role he certainly embraces on Team TCGPlayer.

That's one of the primary advantages, really, of team testing, especially in a format as diverse as Modern. Divide and conquer.

"Modern is so wide open," said Hall of Famer Raphael Levy of Team Revolution. "We tried a lot of decks. Modern has like 20 decks."

That gives a strong advantage to teams like The Pantheon, where different people, typically by simply being who they are, take different roles. For them, the ideas guys – the "hey, maybe we should try this" crew – consisted of Patrick Chapin, Sam Black, Owen Turtenwald, Gabriel Nassif, Brad Nelson, Reid Duke and Andrew Cuneo. But if you wanted to tweak an existing deck, the team often looked to Tom Martell, William Jensen, Jon Finkel, or Budde.

But they also had specialists for different archetypes and macro archetypes. Turtenwald and Duke were especially instrumental on looking at Jund and agressive strategies while Nassif, Chapin and Cuneo focused on control. And finally, Sam Black "put together all the crazy stuff," as Martell said.

Meanwhile, the team could also count on Chapin to break down the expected metagame while Rich Hoaen returned to the team to help serve as resident limited guru.

Team TCGPlayer had a similar strategy, even taking it a step further and assigning players individual archetypes to go play with and report back to the team. Recent Grand Prix Mexico City 2014 Champion Marc Lalague, for example, was the team's designated Hexproof Auras tester while Ari Lax tested Infect and Affinity before reporting back via Skype chats. Craig Wescoe, of course, tackled aggressive White-based decks while the team relied on Matt McCullough for all things Splinter Twin. Limited, meanwhile, was the focus of all-universe limited master Chris Fennell and GP Champ Lalague.

Conley Woods, meanwhile, "took care of everything" organizationally, as it was his first time on the team and he wanted to make sure everything ran smoothly.

"There were a lot of first date jokes," Woods said.

The benefit of breaking things up this way is that you can really rely on certain players to know decks inside and out, virtually guaranteeing the best version of that list and the most experienced pilots are there for your testing gauntlet. Alexander Hayne listed off nearly a half dozen members of Team Face 2 Face Games who had all had success with various archetypes at the Grand Prix or higher level and could be counted on to deliver the best versions for their gauntlet.

The team then ran mock tournaments to see how things played out, and the certainly benefit from having players like Josh McClain testing Birthing Pod decks, Alex Majlaton attempting Affinity, Lucas Siow and Ben Moir smashing versions of Jund, and Glenn Mclelwain toying with Splinter Twin. When these players sleeve up those decks for testing, the team knew it could rely on their results to be accurate.

But not every team tested the same way. Team Revolution and Team Doge took more holistic approaches, as did the team of European all-stars featuring Nico Bohny, Florian Pils, Thomas Holzinger and more. The teams took broader approaches to their testing, giving everyone a taste of everything and then coming back together to discuss the results.

And, oddly enough, the process doesn't seem to change the end result. While players on each of these teams are playing different decks, the teams that took the divide and conquer strategy also have their teams split into several different camps. With teams this large and a format this diverse, it's rare to find an entire team dedicated to a single strategy across the board.

The size of the teams necessitated another kind of role as well.

"They call me the boss," Matej Zatlkaj joked, pointing the finger at himself when asked who their group organizer was. 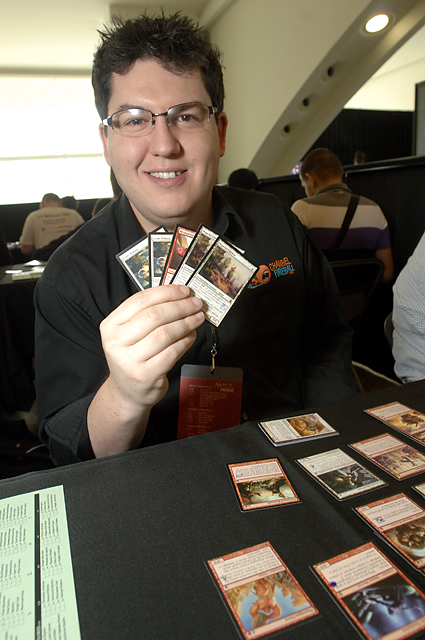 No. 7 Ranked Player Tom Martell is just one cog in CFB: The Pantheon, fulfilling a distinct role on the team much like how Budde serves as the one who ensures teammates take care of themselves alongside offering valuable advice.

Similarly, Martell said Budde was "the Den Father" for his role in making sure everyone, you know, ate. Likewise, Conley Woods stepped up as a logistics man while John Stern filled that role for Face 2 Face Games. Alex Hayne, meanwhile, called himself the team's mascot. Luis-Scott Vargas organized most of the particulars of travel for ChannelFireball. It may seem like a role that's less important than others, but the first time eight people sit down and ask "So, who has product," you're going to wish you had someone filling this role.

The result of all of this specialization or generalization is, the teams hope, running away from the field as a whole. The ultimate result, of course, would be being the team that found a clear break in the metagame and boosted as many players on their squad as possible to the top of the rankings.

"Everyone is looking to break it," Woods said, "but maybe one team breaks it at one Pro Tour per year. It's pretty rare. The number one thing is that everyone stays level-headed and you come out with a good deck that gives your team the best chance to win."