ight now, before the match even starts, Christian Seibold must be pretty happy with Patrick Dickmann.

Dickmann and Seibold, you see, are friends and teammates on Team Austria, and Dickmann, playing a unique U/R/G Twin deck, gave Seibold the Affinity deck he used to Top 8.

An Affinity deck that was Dickmann's backup.

In the end, it worked out pretty well for both of them, each earning their first Pro Tour Top 8s after some success on the Grand Prix circuit. Dickmann has a win at Grand Prix Antwerp while Seibold has a strong finish in the money.

But only one would get to keep playing today.

It appears, at first glance, that Seibold was at a disadvantage. He only has one Galvanic Blast in the main to potentially stop Dickmann's Splinter Twin combo, and Dickmann has enough removal and cheap creatures to disrupt the Affinity plan of killing him before he can do anything.

But never count out Affinity. Sometimes, you're just dead before you can do anything.

Still, Dickmann, who effectively designed both decks, counts himself as a slight favorite.

"Game 1 it's important for me to win through the combo, because he only has one Galvanic Blast to stop me. Games 2 and 3 I can overload him on removal and take out some of my combo," he said.

Dickmann's also not worried about losing the surprise factor that caught many of his opponents off guard in the swiss rounds. His deck, after all, doesn't look much like a Twin deck until it actually wins.

"I still have powerful cards to combo off," he said.

Seibold's powerful, key cards include Etched Champion and Cranial Plating, the primary way Dickmann said he could lose. Seibold figured he was slightly advantaged on the play in Game 1, slightly behind post board on the draw and about even on the play. 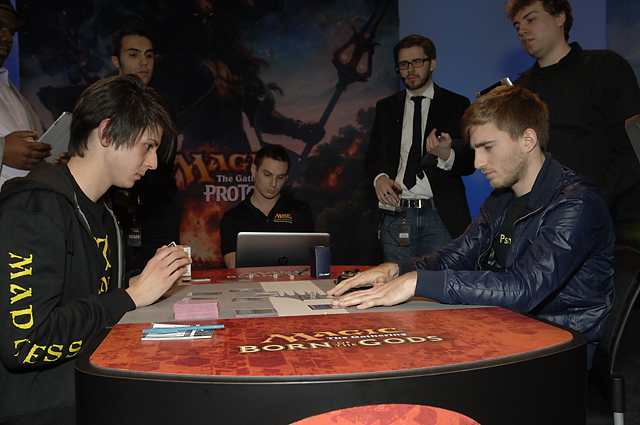 Patrick Dickmann built both of the decks being played in this Quarterfinal match, and while Affinity was only his backup choice, it certainly performed well in the hands of his friend and opponent, Christian Seibold.

Friends and now opponents, the pair shook hands and kicked things off quickly.

Seibold got off to a quick start, as Affinity is wont to do, with turns two and three Steel Overseer with Welding Jar protection. That let him dodge the lightning Bolt that leapt from Dickmann's hand at the first opportunity.

Dickmann had a Scavenging Ooze to parry and a Snapcaster Mage to Lightning Bolt a Steel Overseer, attempting to keep pace with a battlefield that very quickly included Ornithopter, Memnite, Steel Overseer, and Signal Pest, all with varying numbers of counters on them. But the Twin player was falling behind quickly and decisively, all without his combo in hand. 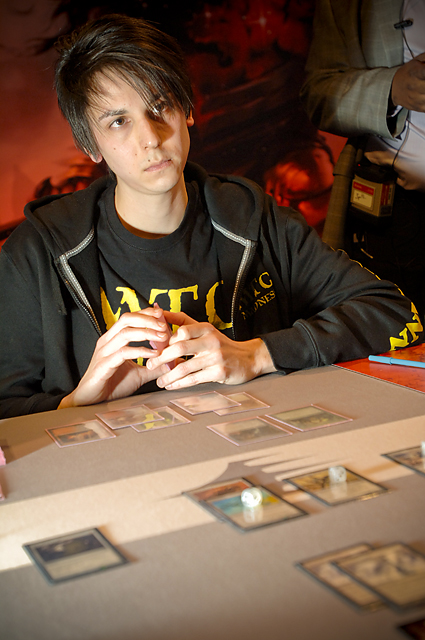 Dickmann's defenses were strong, and it would offer him a lot of extra time to cobble together his combo.

A Cryptic Command gave Dickmann a one-turn reprieve from the Overseer, but it left him tapped out in the face of a newly resolved Cranial Plating. One attack featuring the deadly equipment was enough to drop Dickmann all the way to a measly 2 life.

But with only one Galvanic Blast in Seibold's list, Dickmann could actually play passable defense with the Pestermite and Deceiver Exarchs he had in hand. One Pestermite let him fog for a turn, but things were still looking grim.

Dickmann drew for what looked like a key turn, inhaled slowly, and cast Serum Visions to find some help, but instead threw both cards to the bottom of his library. Seibold had no cards in hand, but he was well ahead on the board.

All this time, somehow and with great care, Dickmann found the opportunity to attack now and then with his Scavenging Ooze, whittling Seibold down bit by bit. It didn't look much like it would matter, but, then again, these small advantages never do.

Another turn, another Pestermite, another fog at the expense of his board state. Dickmann was surviving, but was treading water. Tarmogoyf gave him another blocker, and a Deceiver Exarch another tapper. That, finally, was enough to discourage Seibold from attacking. 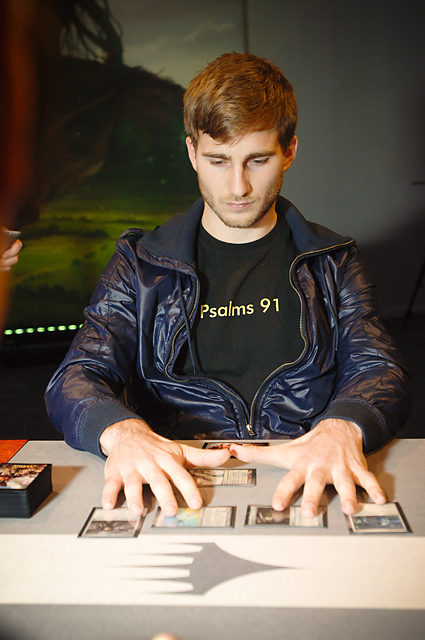 Seibold does what he can in the first game, getting attacks in when possible.

He checked the board, checked his hand, and checked it all again. The math was right.

"Tap your team with Cryptic Command and draw a card?"

With Deceiver Exarch, a 5/6 Tarmogoyf, and a Scavenging Ooze that could grow to exactly 4/4, Dickmann, thanks to the power of Cryptic Command, found a window to deal exactly lethal to his teammate after surviving by the slimmest of margins for nearly half a dozen turns.

He hadn't combed off, but his powerful cards had certainly done their job.

Post-board changed things extensively. Dickmann brought in Ancient Grudge and Nature's Claim, along with Anger of the Gods, Batterskull, Engineered Explosives and Spellskite, taking out some of his combo cards and Remand. His plan, he said, was to basically kill all of the things.

And his opening hand for a decisive second game saw several of those staring back at him, but it had neither the right color mana (Thoughtseize) or the accompanying pressure (Spellskite) to make the hand worth of a keep. 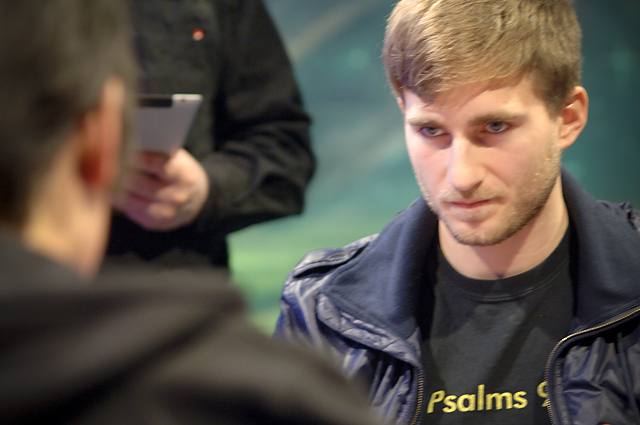 Seibold has forms of disruption, but it sometimes can be difficult to have the mana in which to cast it.

His second was acceptable, albeit slow. A first turn Vault Skirge was stung by Lightning Bolt, and a Cranial Plating was immediately sent shuffling off with Ancient Grudge.

But Seibold wasn't without resources. Welding Jar gave him some protection from the Ancient Grudge in the graveyard, and a Torpor Orb shut down a large swath of Dickmann's creature base, earning a Snapcaster/Bolt in response.

Dickmann followed up with a Splinter Twin on Snapcaster Mage to get in some phantom beats without risking the real human wizard, then added a Scavenging Ooze to the board, looking to end the game soon. His hand contained only a Flame Slash and a second Splinter Twin, so it appeared that attacking and attacking quickly would be his only out.

Seibold, it turned out, had the same idea. He animated two Inkmoth Nexus and attached Cranial Plating to one. Ancient Grudge blunted most of the first attack, asSeibold declined to use Welding Jar on anything other than protecting Cranial Plating, but a second attack the following turn led to no such answer. With no way to stop eight Infect damage, Dickmann succumbed in one large attack.

Two large attacks had decided the first two games, but it was a 0/4 that made all the difference in the decider. 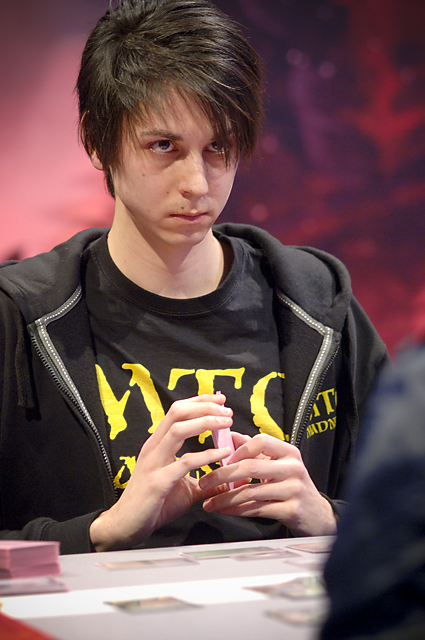 Dickmann and his opponent know the power of an 0/4 artifact creature when it has the effects that Spellskite possesses.

Seibold kicked things off with a Vault Skirge while Dickmann was busy filtering through his deck with Serum Visions. A Lightning Bolt removed the annoying 1/1 flier, and all Seibold could do was resolve an Ornithopter and pass the turn. He lost a Blinkmoth Nexus to a Lightning Bolt the following turn as well.

Oh, and Dickmann played a certain 0/4. Hold on to that thought.

As Dickmann attacked with a Pestermite, things looked grim for the Affinity mage, who hadn't managed to land one of the powerful cards that they players knew would define post board games. Arcbound Ravager was a start, but it was potentially vulnerable to a number of tricks Dickmann could have up his sleeve.

He unveiled one such trick the next time the Ravager attacked. Snapcaster Mage targeting Lightning Bolt put Seibold in a pickle. He could save the Ravager in any number of ways, but with the Mage blocking, he had to sacrifice nearly his entire board to keep it alive.

When the dust settled, Seibold had a 6/6 Arcbound Ravager, but it had just a Glimmervoid and Welding Jar for company. With just one creature to worry about, Dickmann's Deceiver Exarchs and Pestermites became even more useful. The blue flash creatures fogged for a few turns until Dickmann unveiled the entirety of his plan.

Remember that 0/4? It was a Spellskite, and it suddenly loomed very large. Seibold attacked once more with his 6/6 Arcbound Ravager, hoping to ride it to victory with little else going on.

So Dickmann tested him. Ancient Grudge? 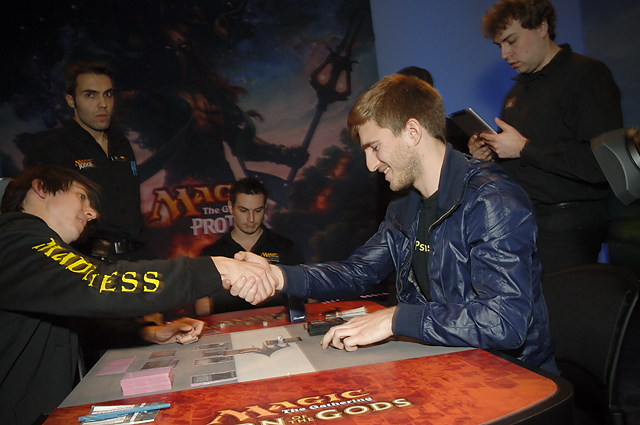 Spellsk...oh wait. That, finally, Dickmann and the Spellskite allowed.

Patrick Dickmann defeats Christian Seibold 2-1 and advances to the Semifinals!