n the run up to the Top 8, there's a lot of speculation about match-ups, who'll win, who'll fall off, what match-ups certain players want to see, and, above all, how each player feels about their own chances.

If you ask Chris Fennell and Jacob Wilson about their odds against the other, they'll both give you the same response: they feel very good about their chances.

Of course, neither player would have gotten this far without liking their deck and being very sure of their play with it. If there's anything this tournament has proved, it's that being good at Modern is a specialty, and knowing your deck inside and out is a massive advantage over the field.

But both Fennell and Wilson exuded confidence prior to their quarterfinals match, taking slightly different views of how things would play out.

"I feel like it's close," Wilson said. "I played against Andrew Shrout, Chris's teammate playing the exact 75, and only lost because I mulled to three. Even then, I had lethal on the board. So it's close."

That loss was one of just two Wilson suffered over the course of the tournament, and, he said, his only match against Storm.

"There are two ways I win. One is where I combo faster, which is unlikely. The other way is that I get at least two ways to disrupt him, like Thoughtseize and Scavenging Ooze or Sin Collector," the Gold level pro explained. "Since Seething Song was banned, the two most important cards are Electromancer and Pyromancer Ascension, otherwise he can't generate enough mana to go off and I can often just kill him before he combos."

The match-up between the two combo decks is, according to both players, extremely interactive even in Game 1.

"It's a chess match between me distracting him from his main combo and him disrupting mine," Fennell said, pointing to Qasali Pridemage and Scavenging Ooze as the main factors in Game 1. "Or it can be I just draw the nuts and kill him on turn three. If it's not interactive, that means I won. I think I'm favored in Game 1 on the play, but since I'm on the draw, it's probably closer to 50-55 percent in my favor." 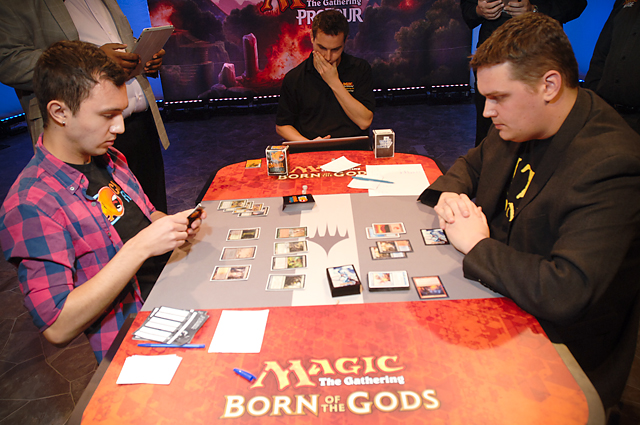 Both Chris Fennell and Jacob Wilson liked their chances in their Quarterfinal match, but only one of these players would be able to prove their perceptions correct.

Fennell did something I had never seen before to start the match. He had a large piece of paper and, as soon as the match started, wrote down Wilson's entire deck list, minus lands.

It was demarcated by casting cost for each creature and the idea was to be able to mark cards off one by one and know exactly where and what Wilson's deck was like at all times. Throw in his Gitaxian Probes and Fennell very well could have rote perfect information at all times.

"I really should do more of this, be more detail oriented. This deck has forced me to do that, and I'm not usually very good at it," Fennell said.

As the match was about to begin, both players closed their eyes and concentrated on the task ahead. 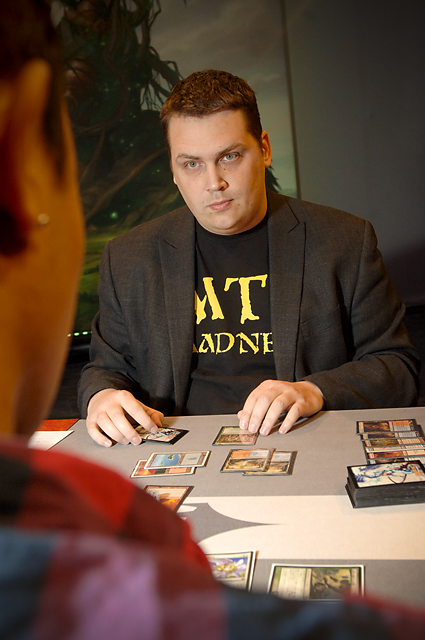 Fennell went into this match prepared to be very detail-oriented, not wanting to make a single play that was against what the percentages said.

Wilson led with Noble Hierarch, while Fennell got his perfect information right away, casting Gitaxian Probe to reveal a solid hand of creatures and lands, but none of the disruption Fennell worried about. Fennell even slowed the game down a bit by Lightning Bolting the Noble Hierarch. Wilson simply played a second, but lost the ability to play the Kitchen Finks in his hand on the second turn, slowing the game down a touch on Pod's side.

Also just like he wanted, Fennell found Pyromancer Ascension on his third turn off a Manamorphose. His hand was stacked with rituals and a few cantrips and, unencumbered, he looked like he could go off on his next turn.

And when Wilson tapped out to play Reveillark, Fennell attempted to do just that.

A pair of Manamorphose turned on Pyromancer Ascension, but a rash of lands off the top of Fennell's deck meant he didn't have the gas to continue. Instead, he Grapeshot to clear out a Reveillark and was forced to pass back the turn at just 9 life.

9 life, however, meant three turns if Wilson had nothing else, two if he had something with at least two power to play. Neither deck seemed to be able to initiate its primary game plan, instead relying on their backup plans to power them through some weak draws. 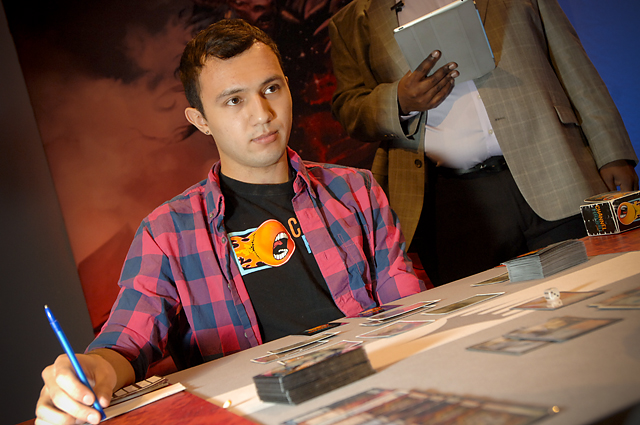 Wilson keeps up the pressure, taking a lead after Fennell's combo fizzled.

Birds of Paradise and Gavony Township gave Wilson lethal on the following turn, and when Fennell's deck coughed up another land he tossed his hand on the table by way of concession.

"I'm literally like 80-90 percent to win that game, and I'm just like brick, brick, brick," Fennell said. "Anything, literally anything. Unbelievable. It didn't happen to me once in nine rounds before this."

Instead, Wilson was reaching for his sideboard in hopes of turning his fortunes around for the last two games.

Wilson's deck gets much better post board, with four Thoughtseize, Sin Collector, Entomber Exarch and potentially Harmonic Sliver, depending on if Wilson thinks Fennell brings in Torpor Orb. As of an hour before their match, Wilson hadn't quite decided that point. But Wilson said he really only needs two pieces of disruption to throw Fennell off long enough to either combo off or just attack for the win.

Fennell, on the other hand, said he values his access to Anger of the Gods over the entirety of what Wilson brings in. And the lack of Ethersworn Canonist is also a major boon.

"If he had one Ethersworn Canonist, this match-up goes down like 15 percent for me," Fennell said.

For the second game, Gitaxian Probe gave Fennell perfect information right from the start, revealing an incredible hand for Wilson, with two Noble Hierarch, Birthing Pod, Thoughtseize, and the appropriate lands. Wilson had one of the two disruption pieces he said he needed post board, and Birthing Pod to top it all off. 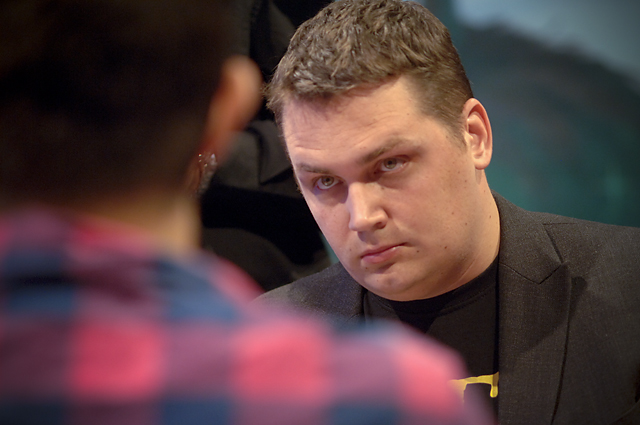 Armed with info after a first-turn Gitaxian Probe, Fennell was ready to lead with his deck's key enchantment.

Fennell's start wasn't so bad either, with a turn two Pyromancer Ascension adding a counter before Wilson even played his second land. If it could stay in play, it would provide some redundancy and power to get through disruption.

If it stayed in play.

Unfortunately for Fennell, Wilson drew an Abrupt Decay off the top to short circuit any plans the Pyromancer had of Ascending any time soon. Wilson cast Thoughtseize and passed the turn with two untapped mana, a move that caused Fennell to squint at the board.

That was one piece of disruption.

"Nice draw," Fennell said when he lost the enchantment in response to Desperate Ritual.

And that was two. 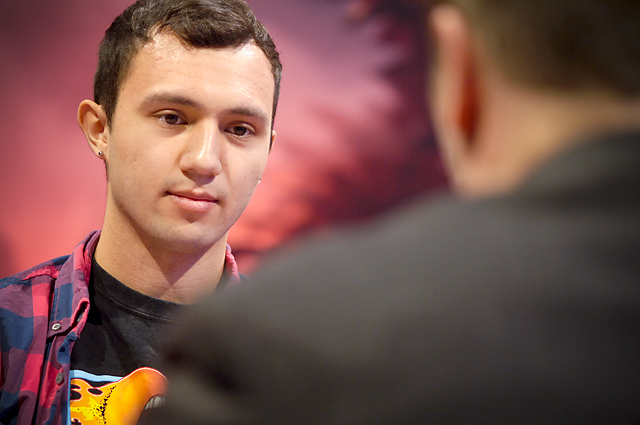 A timely Abrupt Decay off the top puts Wilson ahead in the second game.

According to Wilson, that was the key point at which he became advantaged. If the theory held true, we'd have a third game.

But Fennell wasn't under any real pressure and began to dig with Faithless Looting and a variety of cantrips, starting to rebuild after Wilson effectively knocked him off balance.

Now effectively clear of danger for the moment, Wilson began to work his Birthing Pod, turning Noble Hierarch into Wall of Roots, and then a Kitchen Finks into Entomber Exarch to take Fennell's last card.

Fennell had no hand at this point, but a stocked graveyard should he be able to fire off a Past in Flames.

The match, in Wilsons' mind, did in fact come down to that Abrupt Decay, though it was mostly getting that second bit of disruption, whatever the disruption might be, that gave him the advantage.

"There was almost nothing he could do in that position," Wilson said of losing Pyromancer Ascension post-Thoughtseize. "Even if I don't do anything, he's not going to be able to do anything for four or five turns. I could have killed him faster, but I wanted to play around Anger of the Gods."

As for that first game where Wilson did little but play creatures and attack, he was satisfied with his decision to keep it and just hope that Fennell fizzled, as he ended up doing.

"I don't have much disruption Game 1," Wilson said, "And even then my hand was okay, since it could attack for 5 on turn three. His deck just doesn't work sometimes."

Sometimes, that's all it takes. That, and two pieces of disruption.