his match-up is another perfect example of how two decks that share an identical set of colors can have such a different approach to winning the game. Canadian Shaun McLaren's W/U/R Control deck is heavy on the control, with a full suite of countermagic, Sphinx's Revelation for the long game, and an arsenal of removal spells. Las Vegas native Tim Rivera, on the other hand, is playing W/U/R Twin, which essentially outfits the Splinter Twin combo into a W/U/R Flash shell, allowing it to have a bit of redundancy to the combo, additional interaction, and the possibility of attacking people to death without relying on the combo.

This is the second time these two players have faced off in the last twenty-four hours. 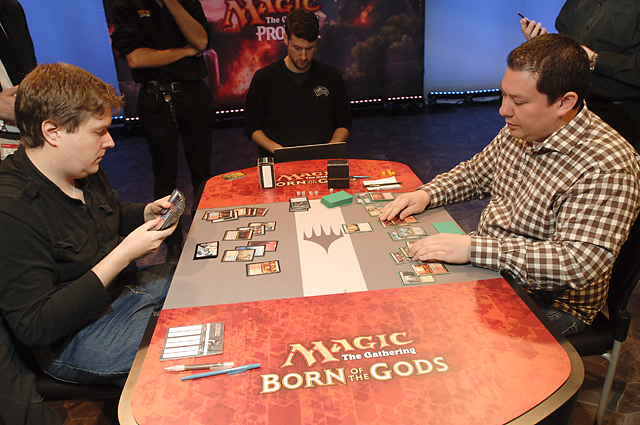 Shaun McLaren and Tim Rivera had a chance to face off earlier yesterday, with McLaren coming out ahead. This time, there was a lot more on the line. Would McLaren repeat yesterday's result, or would Rivera steal victory from his grasp?

"He beat me in Round 15 yesterday," Rivera told me before the match. "I hope this one goes better. The match-up should be alright for me. It is really hard for him to ever tap out to play anything against me, but I don't have the same restriction."

"I really want to draw as many counterspells as I can early on," McLaren told me. "Most of my removal is pretty bad against Restoration Angel and Deceiver Exarch. Path to Exile is really important to help deal with those, but I can't often afford to cast Path to Exile early and let them get free lands into play."

Both players opened with mulligans, but their six card hands were nearly ideal for both of them. Rivera's opening draw was complete with both Deceiver Exarch and Kiki-Jiki, Mirror Breaker, should he decide for the combo, as well as a Restoration Angel, opening up the aggressive route. McLaren, on the other hand, found himself stumbling on mana early, but his hand was filled with removal spells to both help disrupt Rivera's combo and pare down the deadliness of his attack, including a pair of Path to Exiles and Snapcaster Mages.

Rivera rapidly assembled his combo pieces, playing Deceiver Exarch, Restoration Angel, and Kiki-Jiki right on curve. McLaren's opening draw was idea for stymieing this, however, and his had full of Lightning Bolts, Path to Exiles, and Snapcaster Mages made short work of the Angel and Kiki-Jiki, denying Rivera the chance to go off. A second Kiki-Jiki fared no better, falling prey to yet another Lightning Bolt. 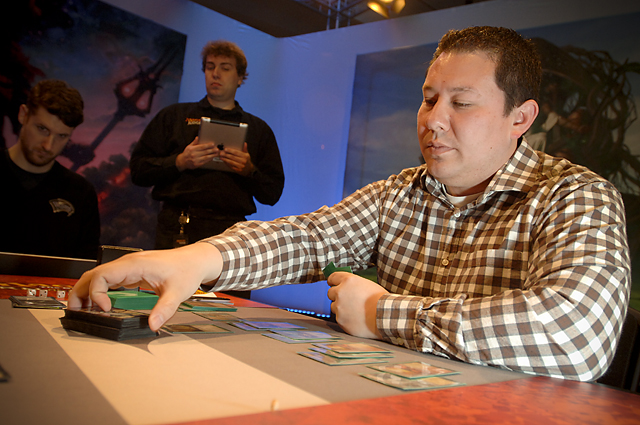 The barrage had essentially neutered Rivera's draw, while McLaren was still left with options holding Lightning Helix, Path to Exile, and Snapcaster Mage still in hand. He even held a Sphinx's Revelation to refill his hand when given the opportunity. Rivera's Deceiver Exarch was the lone survivor of McLaren's barrage, but it presented a laughably slow clock. As the turns dragged on, Rivera's chances of winning the game began to dwindle.

The first game was all but put away when McLaren used Path to Exile to remove the remaining Deceiver Exarch in response to a Splinter Twin. Rivera had virtually nothing, and McLaren had a Sphinx's Revelation to help him recover and was about to turn the corner. Thanks to Snapcaster Mage, McLaren was able to cast the Revelation twice, completely refilling his hand. His hand now full of cards, he began to turn his burn on Rivera, finishing him off under a stream of card advantage.

McLaren's six card draw had been about the best that he could have hoped for to combat Rivera's Splinter Twin deck. Access to both Path to Exile and Snapcaster Mages gave him the perfect combination to deal with the four-toughness Angel and Deceiver Exarch. Rivera, on the other hand, held the perfect cards to assemble his combo, but not the cards required to protect it. After sideboarding, Rivera would have access to Dispel and Spellskite, cards which are more than able to prevent that from happening again. 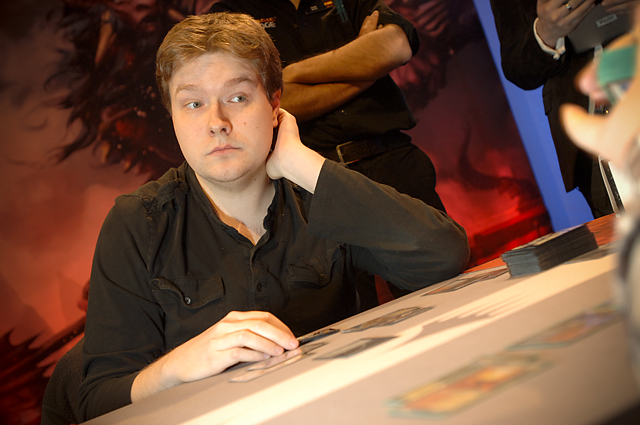 McLaren's knowledge of the match-up puts him in the driver's seat.

Rivera's open in the second game was far less direct than it had been in the first. His early attempts at getting Kiki-Jiki and Restoration Angel into play were met with strong resistance, as expected. This pattern continued for a number of turns, until a massive counterwar over a Restoration Angel severely depleted both players' hands. McLaren was still left with a couple of answers to a combo attempt, holding Wear//Tear and Spell Snare, while Rivera held just a Deceiver Exarch. With the game beginning to lean slightly in McLaren's favor, Rivera found himself two huge cards off the top of the deck. After drawing a single copy of Splinter Twin, Rivera held a potential win in his hand, if not for the removal in McLaren's hand. When he cast a Restoration Angel, flickering his Wall of Omens to draw a second Splinter Twin, it looked like the game would be his.

At the end of McLaren's next turn, Rivera cast the Deceiver Exarch. After untapping, he cast Splinter Twin targeting it. McLaren waited until Rivera tried to activate it to cast Tear. Rivera had the opportunity to either cast Snapcaster Mage and Dispel it or simply let it resolve and cast the second Splinter Twin. Based on a brief exchange over a Wall of Omens early in the game, Rivera figured that McLaren had the Spell Snare, opting to go with the safer second path. McLaren had no answer, allowing Rivera to grab the second game of the match off of an incredibly key couple of draws. 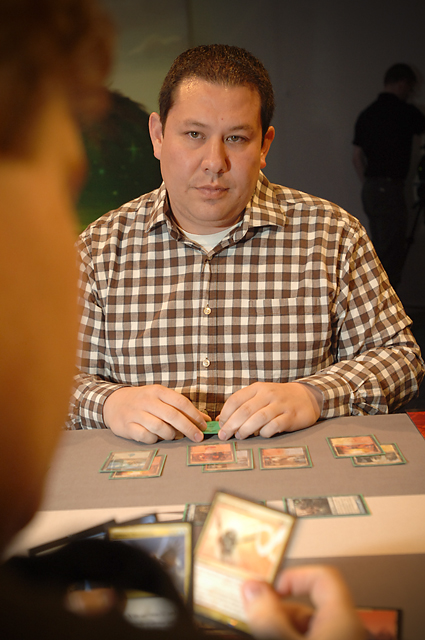 The final game of this Quarterfinals match opened with a glacial pace. Things finally started to get exciting when Rivera decided to use a Splinter Twin on a Wall of Omens to generate an effective one-sided Howling Mine. This prompted McLaren to cast his Vendilion Clique to survey Rivera's plan. Dispel, Splinter Twin, Lightning Helix, two lands, and a Kiki-Jiki were all acceptable cards, but there wasn't anything in them that McLaren was truly worried about at the moment. He opted to wash away the Dispel in order to make it easier for him to disrupt any potential combo attempts. While his hand may not have been incredibly impressive, the threat posed by his extra ability to draw cards was potent indeed. That is precisely why McLaren used a Threads of Disloyalty to steal the Wall of Omens for his own. While Threads is only really brought into the deck to combat Rivera's sideboarded Spellskites, situations like this are not entirely uncommon. 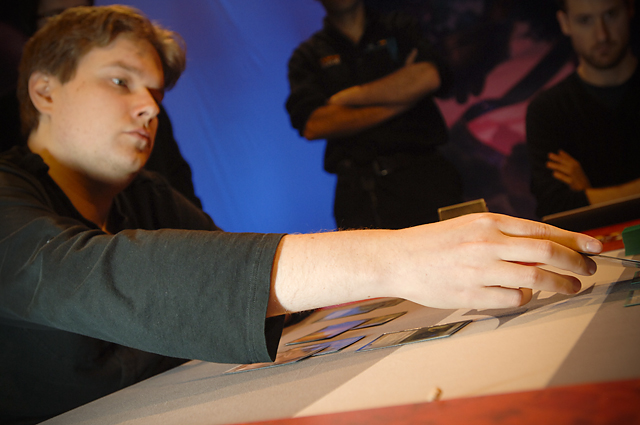 McLaren's Threads of Disloyalty looks to be clutch in the third game.

The exchange was devastating. In order to even things out, Rivera was forced to use his second Splinter Twin on his other Wall of Omens. This prompted another protracted fight for control over the board with McLaren coming out on top, able to burn away the Wall at the temporary cost of all of the cards in his hand. Thanks to his pilfered Wall of Omens engine, however, this was only a minor setback. McLaren furthered his advantage with a pair of Tectonic Edges, destroying Rivera's access to red mana, denying him the chance to play his Kiki-Jiki for at least another two turns. When Rivera finally had built up enough mana to do so, McLaren had built up a large enough hand that it seemed impossible to overcome. Rivera went for the combo kill with Restoration Angel, but McLaren had Path to Exile and Electrolyze to once again wipe the board. With Snapcaster Mage and Counterflux in his hand, he was more than safe enough to build up enough burn spells in his hand to finish Rivera off. 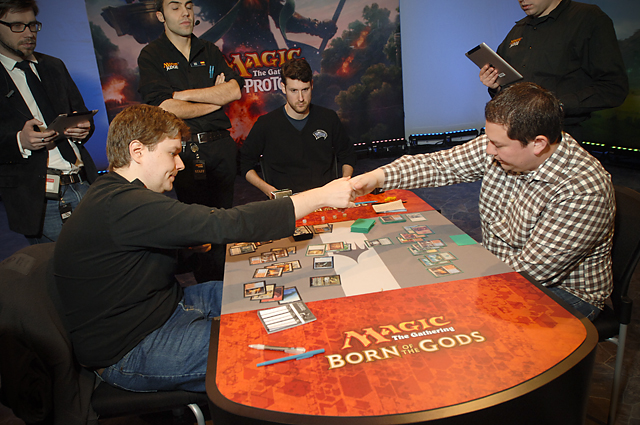 McLaren runs away with the third game, as a stolen Wall of Omens with Splinter Twin allowed him to bury Rivera in card draw.

"That stupid Wall killed me," Rivera said with a smile after the match. "Good luck in the next round."

Shaun McLaren defeats Tim Rivera 2-1 and advances to the Semifinals!