Round 1: Getting a Grip

his is one of the best reasons to love European Pro Tours.

Olle Rade, one of the oldest of old school and a Hall of Famer in the inaugural class of 2005, doesn't play much professional Magic anymore. His last Pro Tour Top 8 was actually sixteen years ago and his first Pro Tour win was all the way back in 1996. There are players at this tournament who weren't even born then.

But Rade was once rightly feared by players all around the world. Immortalized in the card Sylvan Safekeeper and in the Pro Tour Hall of Fame, Rade – who is Swedish – couldn't resist coming out for a Pro Tour so close to home. Getting to see players stretch Magic muscles they haven't flexed on a Professional stage in a while is a real treat.

Rade played in Pro Tour Theros as well, and even finished in the Top 100, but prior to that his last Pro Tour was Paris in 2011. He said he might travel to one U.S. Pro Tour this year, but that these days he couldn't justify leaving his home continent as often as before.

And in his first round Rade runs right up against one of the game's new guard, Pro Tour Dragon's Maze Champion, current Platinum Pro, and No. 23 Ranked Player Craig Wescoe. Wescoe's best known for his mastery of White Weenie-style decks, but, as his Pro Tour win demonstrated, he's perfectly adept in Limited as well. Interestingly enough, Sylvan Safekeeper is exactly the kind of card Wescoe might find himself playing—alongside White creatures, of course—were it legal in Standard or Modern. 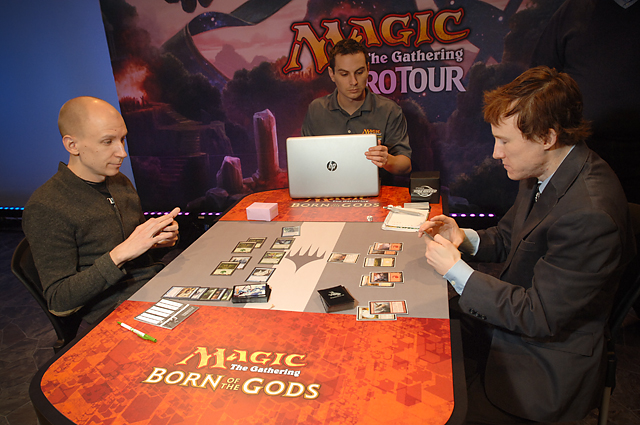 It was a battle of old guard versus new guard, as Hall of Famer Olle Rade clashed with No. 23 Ranked Player Craig Wescoe.

It just so happens that it's also an early match-up of two of the tournament's "super teams." Rade tested with Elaborate Ruse, the European squad featuring Stanislav Cifka, Willy Edel, Joel Larsson, and several other Europeans, while Wescoe is a mainstay of Team TCGPlayer alongside Conley Woods, Ari Lax, Chris Fennell, and more.

"Big surprise. You're on Forest and I'm on Plains," Wescoe said as the two players led with the lands they're best known for on the Constructed side.

Rade paired his signature land with an Island and started quickly with both Deepwater Hypnotist and Agent of the Fates, curving out with a pair of two-drops on his fourth turn. Wescoe, adding a Mountain to his Plains, was quickly on the back foot with just a Wingsteed Rider to his name.

But Wescoe was far from out of tricks. Hopeful Eidolon gave him a veritable Baneslayer on offense, softening the blow that Rade sent his way on the following turn. A subsequent Battlewise Valor and Fall of the Hammer flipped the game completely, shooting Wescoe all the way up to 25 life and sending Rade down to just 8 life. Wescoe may have been on the mono-Wingsteed Rider plan, but it was an impressive Rider indeed. 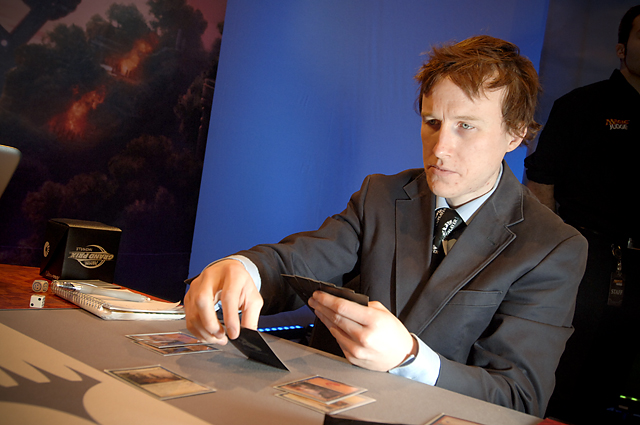 At least it was for a hot moment.

Griptide, one of two in Rade's deck, gave the Hall of Famer his out and made the game closer for the time being. Hundred-Handed One was Wescoe's only response, and it turned out to be an effective one when Rade forgot his Deepwater Hypnotist's inspired trigger. That mistake cost him upwards of 4 damage, damage he needed to get in quickly while he still had the initiative.

Rade continued to flood the board with small and medium-sized creatures while Wescoe played defense for a turn, but it was anyone's game at that point.

At least it was until Rade finally found his second Island, allowing him to spread his wings and fly over Wescoe's team with Archetype of Imagination. That was enough to move them to Game 2 when Wescoe couldn't find a solution in his draw step.

"That was a good rip. The Griptide," Rade pointed out. Indeed, if it weren't for that it's likely Rade wouldn't have lived long enough to Imagine an ending to the first game quite like the one he got. After the match he claimed he was just about to concede.

The second game saw Wescoe take the early initiative with a pair of heroic fliers on curve and a Dragon Mantle to increase the clock. Rade, meanwhile, set up his ground game before leaving up four mana on a key turn. 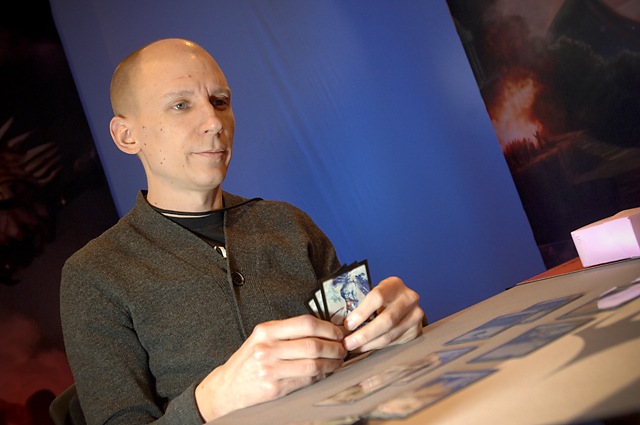 Rade looks to lock things up in Round 1 after a miraculous Game 1 victory.

Wescoe had both a Wingsteed Rider and Akroan Skyguard in play, both at 2/2. Rade had four mana up representing the Griptide that had served him so well in the first game. Wescoe used Dragon Mantle to get in some extra damage, but patiently waited on the Griptide to make his move.

Rade did, indeed, have the Griptide, but that gave Wescoe an opening to use Fall of the Hammer to off a creature and grow his Wingsteed Rider. He had expertly played around the best spell Rade could have in that position and still retained his lead in the race. A few turns and a few more attacks later and Wescoe sent it to a deciding Game 3.

"There's not a whole lot of blocking in this format," Rade mused, somewhat prophetically.

Both players got aggressive right off the start with a variety of cheap creatures. Rade started attacking right from turn two with Sedge Scorpion and Voyaging Satyr, while Wescoe was busy doing his thing with a pair of Akroan Hoplites.

The big swing happened when Rade slipped Snake of the Golden Grove onto the field. Not only did it gain 4 life to swing the race his direction, but at 4/4 it was easily the largest creature on the field. Combined with Wescoe being stuck on three lands, and the ground suddenly belonged to Rade. The air, too, thanks to a follow-up Prescient Chimera.

Wescoe finally drew his fourth land, but at 7 life and facing down a number of beefy Green creatures, the best he could do was gain five life with a Hopeful Eidolon on one of his Hoplites. But tapped out and on 12 life, Rade showed Wescoe a pump spell large enough to push the last few points of damage through, giving him the first round.

For Rade, the turning point of the entire match was that key Griptide in the first game.

"I was about to give up. My only outs were Griptides, and I had two in my deck," Rade said.

But even then, he didn't feel secure about the game state.

"It still didn't look super good," he said, noting that Wescoe had several fliers and plenty of life to race. But then Olle drew that magical second Island for Archetype of Imagination. That gave him the boost he needed to take the first game and springboard his way to a first round victory.