ith a combined six rounds of Booster Draft and ten rounds of Modern, players are looking for two strong Limited performances to boost their records and to compensate for some of the inevitable losses in the Constructed portion. If you happen to lose three matches in Constructed, the math is simple: you cannot afford to lose a match of Limited on your way to the Top 8. For Round 10, we join two players who have already lost three matches of Modern. Undefeated in Limited up to now, both have to keep winning to keep the dream alive.

Nico Bohny is the lone Swiss member of the Austri-Germany Alliance. A mainstay on the Pro Tour, Bohny found himself not qualified for Pro Tour Born of the Gods, looking to Top 25 Pro Tour Theros in Dublin. Proving his understanding of Theros Limited, he supported his 6-3-1 Constructed performance with a 5-1 in Draft, concluding in a 16th place finish for the Swiss. Known for his durdly Limited decks, Bohny acknowledges the speed of the format and drafts accordingly. He is open to draft any color combination, winning his first draft pod with a blue-green tempo deck.

Just like Bohny, Melissa DeTora is part of an international team in Team Revolution. Losing to eventual winner Tom Martell in the Top 8 of Pro Tour Gatecrash, she is currently a Gold pro on the hunt for more Pro Points. Her Modern deck did not serve her well so far, but her White-Black Midrange Draft deck turned out to be unbeatable yesterday. Depending on your color combination, the black cards of Born of the Gods and Theros can support aggressive and controlling strategies alike. This makes black a challenging color to draft, but DeTora rose to the challenge and reaped the rewards. 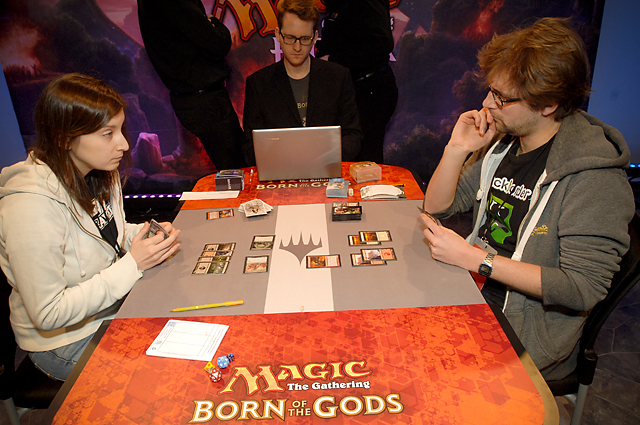 Both Nico Bohny and Melissa DeTora have put up solid finishes in Limited at this Pro Tour, but only one of these players would remain undefeated in the 40-card rounds of Pro Tour Born of the Gods.

Bohny is playing one of the defining decks of the Born of the Gods/Theros Draft format. His aggressive white-red deck relies on cheap creatures, backed up by bestow creatures and regular auras to complicate blocking and to stay ahead in the race. He did not manage to pick up a large quantity of heroic creatures, but the quality of Wingsteed Rider and Anax and Cymede more than makes up for that. Nyxborn Rollicker and Nyxborn Shieldmate prove that Bohny is trying to get out of the gates as quickly as possible. Should his early offense be halted he can always count on Eidolon of Countless Battles to support his army.

Just like on Day One, DeTora drafted a black deck, this time paired with red. As a result, she is playing a much more aggressive deck: lots of two-drops, cheap tricks, and efficient removal spells. Her aggressive black-red deck does not rely on Heroic and Bestow as much as Bohny's. Instead, its gameplan revolves around continuously attacking with small creatures, using cards like Lightning Strike and Boon of Erebos to clear the way and punish blocking, respectively. Should the game go longer, DeTora has Read the Bones and Erebos, God of the Dead to generate card advantage. Last but certainly not least, Nighthowler is her lategame weapon of choice and the antithesis to Bohny's Eidolon of Countless Battles.

DeTora won the die roll, giving her the early advantage in this matchup of aggressive decks. She showed her willingness to push that advantage when she took out Bohny's Deathbellow Raider with Lightning Strike to connect with Fleshmad Steed. This forced Bohny to trade off his Archetype of Aggression to stem the bleeding. With no creatures in play, Bohny was holding a hand of lands. He had to pass on consecutive turns, drawing into Ordeal of Purphoros and God's Willing, lacking targets. 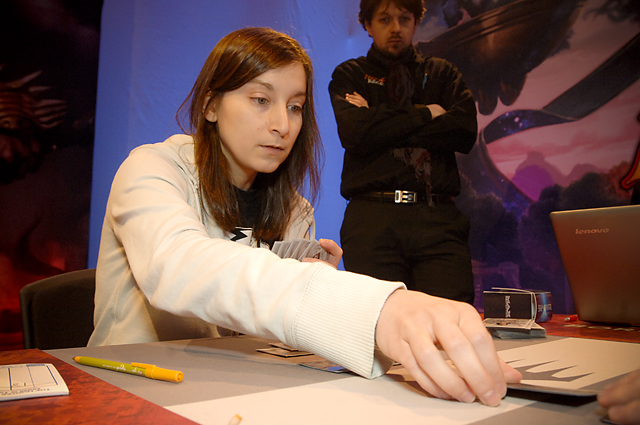 DeTora's black-red deck comes out of the gates quickly, just as you'd expect from the color combination of minotaurs.

DeTora wasted no time capitalizing on the weakness of the W/R Heroic deck. Erebos, God of the Dead was followed by Kragma Warcaller, which hasted in for 4 damage. Activating Erebos twice dropped DeTora to 16 and found her a Nighthowler. After multiple turns without relevant plays, Bohny was forced to concede.

Both players were keen on adapting their deck for the deck they were facing. Bohny opted for three Lagonna-Band Elders, as he had seen a 3-toughness five-drop in Kragma Warcaller and knew that the incidental lifegain would support his plans of racing his opponent. DeTora decided to go for a more controlling build on the draw, putting in Viper's Kiss.

For Game 2, DeTora started with Satyr Rambler. Bohny's Anax and Cymede was taken out by Magma Jet. On turn four, Nyxborn Shieldmate served as a 1/2 blocker and meant that Lagonna-Band Elder would gain Bohny 3 life. Trying to stay aggressive, DeTora saved her Satyr Rambler with Boon of Erebos when Nyxborn Shieldmate stepped in the way. However, she only had a Fleshmad Steed to add to the board.

At this stage, Bohny had the stronger follow-up in a bestowed Eidolon of Countless Battles, turning Lagonna-Band Elder into a 5/4. Lash of the Whip killed the Elder after one hit, but thanks to Bestow, DeTora still had the Eidolon to worry about. While DeTora was looking for solutions with Read the Bones, Bohny was happy to play out his creatures and to keep attacking with his Eidolon. 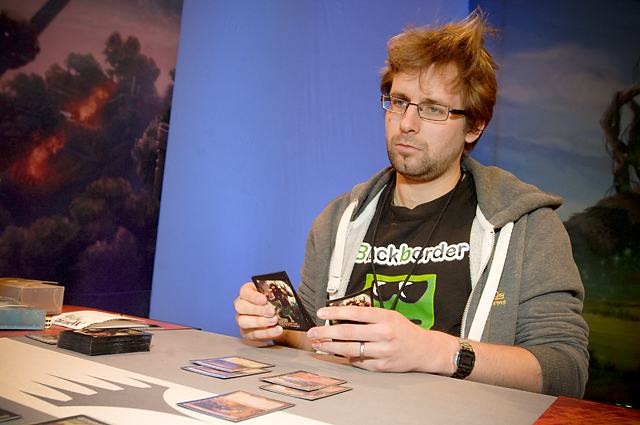 Bohny's white-red strategy is one of the favorites in Limited thanks to the addition of Born of the Gods.

Read the Bones did find DeTora a Nighthowler, which turned her Satyr Rambler into a 6/5 to block with. However, Bohny was prepared: Elite Skirmisher plus Ordeal of Purphoros allowed him to tap the blocker, grow the Eidolon by 2, and attack for lethal.

DeTora would be on the play for the deciding game. A mulligan meant that she had to start with six cards, one of which was a turn two Fellhide Brawler. Bohny's starting hand offered the dreaded start of one-drop into one of the five Ordeals, in this case Nyxborn Shieldmate and Ordeal of Purphoros. Fellhide Brawler was no help, so DeTora cast Read the Bones to look for a solution to the growing Shieldmate. Bohny attacked with it, now a 3/4, and dropped Elite Skirmisher.

At this point it looked like DeTora was too far behind, lacking the fifth land to cast Lash of the Whip. However, she combined Lightning Strike and Viper's Kiss to take out the Shieldmate. On 13 life, she was still behind on the board, but dealing with Bohny's largest threat was a first step. What followed was a flurry of removal spells: Magma Jet took out Bohny's Skirmisher, and she used the two Swamps that she had left untapped to cast Bile Blight on his follow-up Wingsteed Rider.

When Bohny allowed Pharagax Giant to become a 5/5, DeTora knew that something was up. Attacking on an empty board, she drew the Divine Verdict that Bohny was holding. She was fine with losing her 5/5 if it would allow her Insatiable Harpy to live. This was not the case, however, as Bohny revealed a Last Breath. A Lagonna Band-Elder by Bohny left him with one card in hand and 14 life. Shrike Harpy by Melissa was allowed to turn into a 4/4, her only creature on one card and 13 life.

DeTora had stopped the early aggression by Bohny and had more than equalized the board. It would come down to the next draw steps. Two-Headed Cerberus for Bohny. Kragma Warcaller for DeTora, which traded with his sideboarded Elder. A topdecked Rage of Purphoros took out Shrike Harpy, and Bohny got in for 2 damage with his double striker.

Needing an answer, this time it was DeTora who suffered from drawing an uncastable spell in the form of Boon of Erebos. An innocuous Nyxborn Rollicker from Bohny meant that Two-Headed Cerberus was threatening lethal next turn. A land from the top her deck was no help for DeTora, who extended her hand to Bohny, now 5-0 in Born of the Gods Limited.