haun McLaren has been having a very good day. After dropping a lone match during yesterday's play, he ran a perfect 3-0 record off during the opening Draft rounds today to surge to the top of the standings. Now that things have transitioned to Modern, McLaren has returned to a U/W/R deck reminiscent of the deck Shahar Shenhar used to win the World Championship last year. Thanks to his excellent run, McLaren came into this round as the King of the Hill, an honor complete with his very own feature match table. Sitting across from him was Lee Shi Tian of Team MTG Mint Card, who had, earlier in the day, been the one sitting at the big boy table. He was running the clever Blue Moon control deck that has been one of the biggest innovations at this Pro Tour. 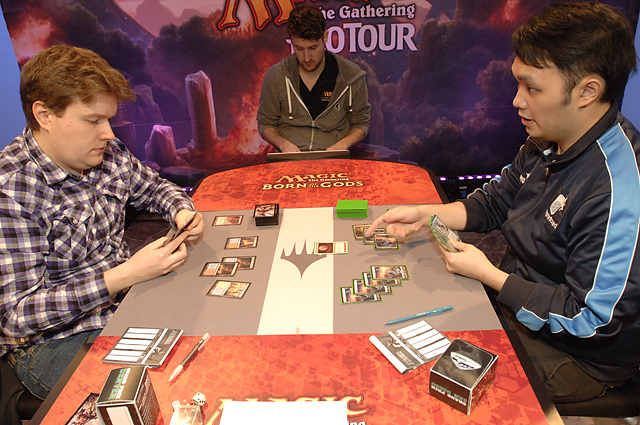 Both Shaun McLaren and Lee Shi Tian have spent a lot of time at the top tables, battling it out for a seat at the King of the Hill table in this weekend's event.

This match between two glacial control decks promised to be long and grinding, so it was unsurprising that nothing of note happened for the first five or six turns of the game. McLaren was the first to fall behind, failing to find a fifth land, while Lee continued to build his lead. Rather than discard, McLaren had to begin aiming his burn spells right at Lee. Lee waited until he had seven lands in play before pulling the trigger, casting a Blood Moon with Cryptic Command mana available. A small counter-war ensued, with McLaren coming out the victor, and a Remand sent the Blood Moon back to Lee's hand. The counter-war had left him completely tapped out, and McLaren took advantage of the opportunity to cast Ajani Vengeant, locking down Lee's lone Mountain. It was quickly replaced, allowing him to play a Blood Moon. A very lonely Master of Waves for one followed, and Lee was able to begin attacking.

McLaren began to try to end the game himself, using Snapcaster Mage and Ajani to throw burn at Lee's head, dropping him down to 6. Lee used a Threads of Disloyalty to steal McLaren's defending Snapcaster, clearing the way for him to finish off Ajani, protecting his life total. McLaren still held a tremendous amount of potential damage, though, attempting to use a Lightning Helix to finish Lee off. Lee was able to Cryptic Command it, but there were still a tense few moments while he and McLaren postured over the spell's resolution. 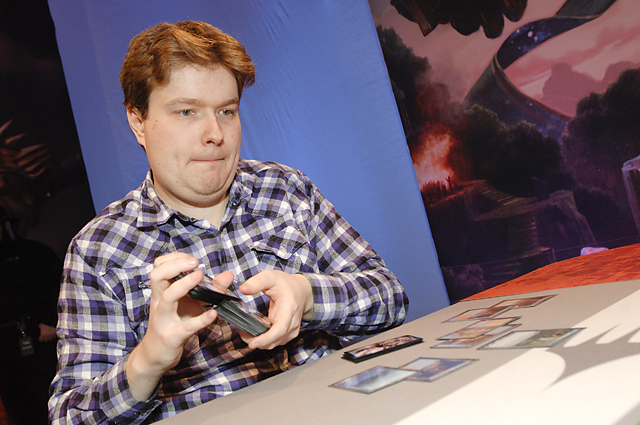 As low as Lee's life was, McLaren wasn't safe himself. As Lee's creatures continued to attack, McLaren's life fell away in chunks. At one point, Lee was forced to bounce his own Master of Waves with a Vapor Snag to dodge a removal spell, but it ended up actually increasing his clock, as the Threads of Disloyalty effectively gave him three more attackers than he had previously. The game was down to the wire, and McLaren had one final shot. He aimed a Lightning Bolt at Lee, dropping him to 2. Lee had one card left in hand and two lands untapped. McLaren couldn't afford to play around a Counterspell of any kind, as he was dead to the elementals on the following turn. He just shrugged slightly and tried for a lethal Lightning Helix. Lee reached for the card in his hand, glanced at it, and nodded before scooping his cards into a pile.

Lee began the second game with an assault on McLaren's mana. Spreading Seas turned a Celestial Colonnade into an Island, which was at least not useless for McLaren, though it did rid him of one of the best threats in his deck. The next few turns were spent building mana bases and hands, neither player wanting to commit anything to the board, fearing to tap their lands. Lee was the first to break the stalemate, trying to deny McLaren white mana with a second Spreading Seas. McLaren tried to counter it, so Lee used Remand to put the Seas back in his hand for another go. On the next turn, a larger counterwar ensued, this time ending with a Snapcaster Mage in play on McLaren's side, and the Spreading Seas in the graveyard. McLaren found a second Colonnade and tried to attack once, but a Spreading Seas ensured that it wouldn't get more than the one chance. 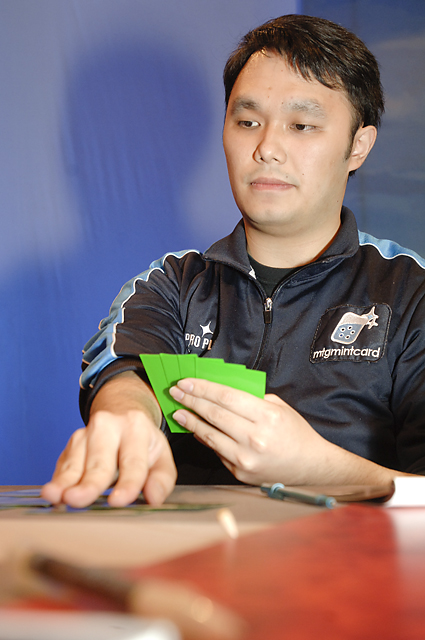 Lee's enchantments are a fine form of mana color disruption.

When it came time for Lee to attack, he didn't mess around. His Batterskull began to eat McLaren's life total quite efficiently. He tried to add a Vendilion Clique to his offense, but an Izzet Staticaster ended that assisting role before it could even begin. Still, Lee got to learn that McLaren had only a Lightning Bolt and two lands in his hand. Rather than risk McLaren drawing into something strong, Lee simply let him keep all of the cards in his hand. His next turn was the stake through McLaren's heart. Vedalken Shackles threatened to allow Lee to steal the Izzet Staticaster on McLaren's side, which would have been able to wipe away the Soldier tokens he had gotten from an earlier Timely Reinforcements. In order to prevent this, and slow Lee's assault, he chose to kill his own Staticaster. After forcing his way through the Reinforcements, Lee killed Ajani and then started in on McLaren. A Celestial Colonnade tried to come to McLaren's rescue, but Lee hadn't forgotten about his Shackles, using them to keep the path clear. McLaren tried one last effort to stay alive, combining Stony Silence and Celestial Purge to kill the Batterskull, but a Cryptic Command sent the match to a final game.

In the last game of this heavy-control mirror, McLaren chose to draw first. The first play of the game came, as usual, from Lee. A Vendilion Clique revealed a triple Snapcaster Mage, Remand, three-land hand before biting the dust to an Electrolyze. Lee washed away one of McLaren's Snapcasters. The next big blow came a few turns later, when Blood Moon slipped past a Remand to turn all but one of McLaren's lands into Mountains. Lee thought he might be able to eke out a speedy win with time running down by sticking a Batterskull, but McLaren had luckily drawn a Mana Leak to stop it.

From here, the pace of the game became quite frenetic. Both players simply drew and passed as they looked for a way to win the game before time ran out. Lee tried a couple of different methods of ending the game, first Vendilion Clique then Snapcaster Mage. McLaren, meanwhile, was on the burn and Snapcaster Mage plan. McLaren was well ahead on life, at 19 to Lee's 4 when time was called. As the last seconds drained away, neither player could find a way to deal the final points of damage, and the game ended in a draw.

Lee shook his head. "I thought I had that game," he said after the match.

"If you had drawn a Master of Waves, you probably would have," McLaren confirmed.

"That, and you had a small window to draw the Mana Leak for my Batterskull and you managed to," Lee admitted.

1 Anger of the Gods