Round 13: An Aura of Uncertainty

magine it's your first Pro Tour. You've qualified thanks to what our media guide calls a "bonkers Grand Prix win rate" of 76.5 percent, mostly on the back of your Grand Prix win mere months ago. Now imagine you're 10-2 with just a few rounds remaining at your debut Pro Tour, poised for a run at the Top 8 if you can just make it past the Face 2 Face team member sitting across from you in the feature match area.

Tough to picture, right? That's because it's insane.

Yet that's the spot relative newcomer Raymond Tan finds himself in at the top of Round 13 at Pro Tour Born of the Gods. With his Grand Prix debut coming just last year, Tan has been steadily improving, finishing 51st, 45th, and, in his breakout performance, first at Grand Prix Kitakyushu, qualifying him for this tournament. At this rate, I'm fairly certain he'll somehow be World Champion by next week, never mind that it literally isn't possible.

But standing in the way of this glorious rise to fame is Jacob Wilson, a Gold-level Pro with a Grand Prix title of his own on his trophy shelf. Despite being only 18, Wilson already has five Pro Tours under his belt and three Grand Prix top 8s. It almost seems like Wilson is an old hand at this game, but this early in his career he can pretty easily be classified as a rising star himself. 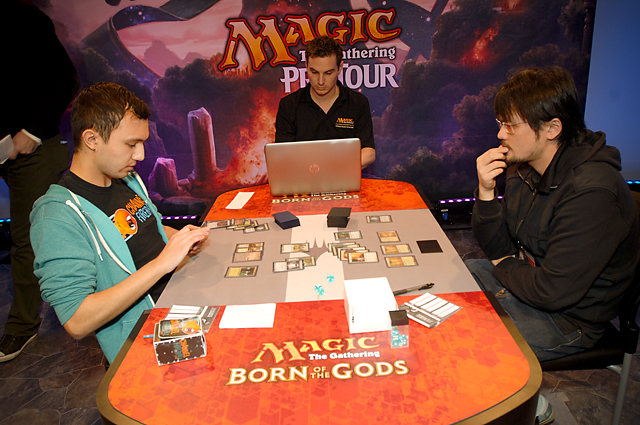 Both Raymond Tan and Jacob Wilson are rising stars of the game, Tan with an astounding Grand Prix win match win percentage and Wilson with an impressive resume at only eighteen years of age.

The match-up also featured two of the marquee decks of the tournament, with Tan boggling people's minds with the Hexproof Auras deck and Wilson expertly piloting Melira Pod, as are many of his Face 2 Face teammates.

Tan got exactly the start he was looking for in this key round, curving Gladecover Scout into two enchantments, including Ethereal Armor, on the second turn. He followed up with a Daybreak Coronet and Hyena Umbra, quickly overshadowing Wilson's Wall of Roots and boosting his little 1/1 elf into a 10/10 monstrosity of doom.

But Wilson wasn't one to go quietly into the night. Chord of Calling found a Spellskite to steal a Rancor just in the nick of time. It kept Wilson from dying outright, but it didn't do much for Tan's quickly escalating life total. It also meant Tan couldn't reliably resolve any more auras.

He also couldn't get past an ever growing parade of chump blockers. Tan shook his head as Wilson used Ranger of Eos to grab two more one-drops, including the key Viscera Seer.

Tan could at least bank on the fact that Wilson was down to 2 life and unable to pay Spellskite's Phyrexian cost, instead forced to hold up Noble Hierarch at virtually all times in case another Rancor found its way to Tan's hand. 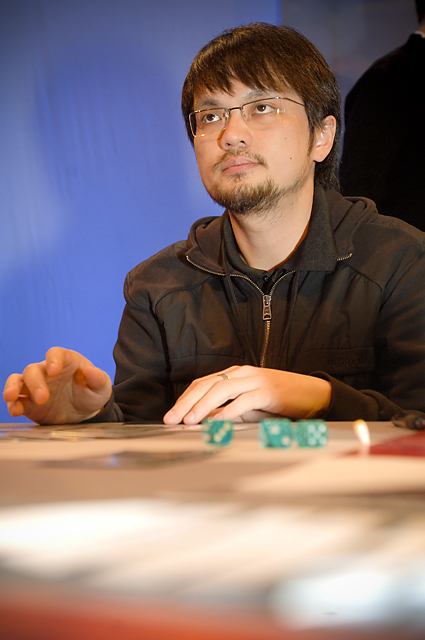 Tan's creatures were capable of becoming monstrous, but they still lacked a natural mechanic that would help end games: trample.

Yet with every turn, Wilson's board crew at about the pace Tan's life total did. Wilson was scattering his side of the battlefield with an assortment of cheap and/or value creatures to buttress his odds.

Tan made a key mistake, running Spirit Mantle into a Spellskite activation, giving Wilson not only a way to prevent Tan from running through unscathed, but also giving him a creature who could block virtually anything Tan could throw at him.

But even if he had held the aura for later, it wouldn't have mattered. It turned out he was dead anyway.

Wilson found Birthing Pod and Chord of Calling, letting him search up both Melira, Sylvok Outcast and Kitchen Finks/Murderous Redcap, completing his combo from behind his wall of creatures and improbably taking a game that appeared to be over at about the one paragraph mark. 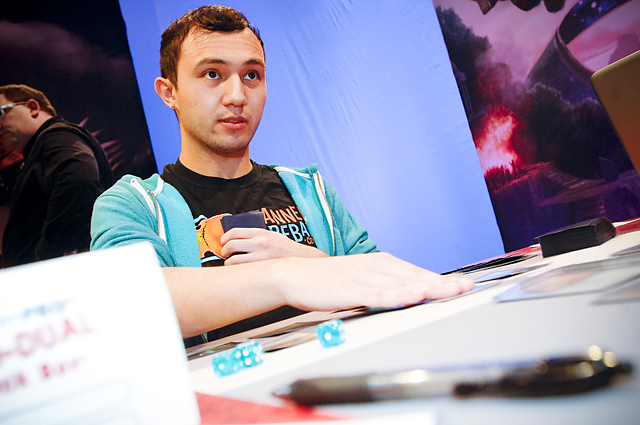 Wilson's discipline in the first game served him well.

Tan had gotten pretty close to his best draw possible, and Wilson had taken his lumps and still came out on top. If that draw couldn't push Tan to victory, what possibly could?

It certainly wasn't the Kor Spiritdancer that Wilson plucked from his grip with Thoughtseize on turn one, the only creature in Tan's grip. Tan had some Auras ready to go, but no creatures. Fortunately, he had Grafdigger's Cage and Stony Silence to at least provide temporary road blocks to anything broken Wilson could do for the moment.

What he couldn't do was prevent Wilson from just casting creatures and attacking, which he started doing with Kitchen Finks and Entomber Exarch on turn four and five.

So even though Tan managed to make a 5/1 Gladecover Scout eventually, he actually couldn't afford to attack and instead fell to just three life. Daybreak Coronet looked an awful lot like a good top-deck on the last possible turn, but Abrupt Decay on the Future Sight aura ended any chances Tan had. He scooped up his cards and wished Wilson good luck.

Tan wasn't out of the running by any means, but his trip to the top was momentarily delayed. Wilson, on the other hand, looked to just be getting started.