"his is the first time you've featured us," Jingwei Zheng said as he sat down across from Tim Rivera in the feature match.

Indeed it was. Zheng and Rivera had been hanging around in the top quarter of the standings for some time, but were only just distancing themselves from the pack at 10-3, on the cusp of a Top 8. They were both PTQ winners who had played on the Pro Tour before, but Rivera was clearly the more experienced one, with ten Pro Tours under his belt.

Granted, some of those tournaments were held in the mid to late 90s, but still.

Zheng, meanwhile, was playing in his third Pro Tour, but given his calm demeanor and talent displayed thus far, you could hardly tell. 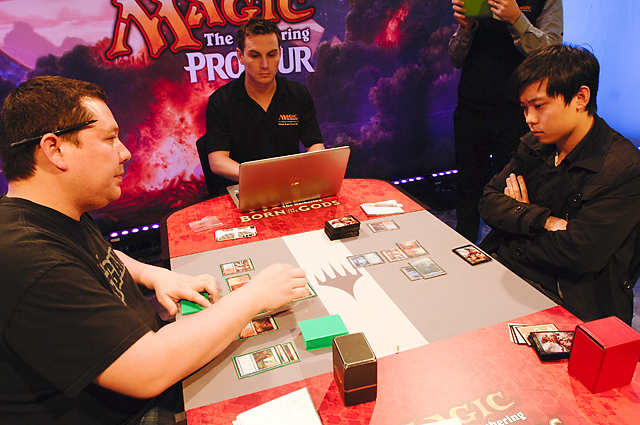 Both Tim Rivera and Jingwei Zheng have been hovering in the top tables all weekend long, skillfully dodging too much attention from the Pro Tour cameras...well, at least until this round.

10-3 was, looking at the standings, on the very edge of Top 8 eligibility. One slip up could send either player tumbling down the ranks, and one win could easily vault them into position to draw at some point. But at this point, in this place, one mistake could spell the end.

And one mistake was exactly what it took.

So, game one happened like this. Both W/U/R players played some lands. Zheng tapped out for Blade Splicer on his third turn, and Rivera punished him with a Deceiver Exarch into Splinter Twin.

Yup, it was just that easy. 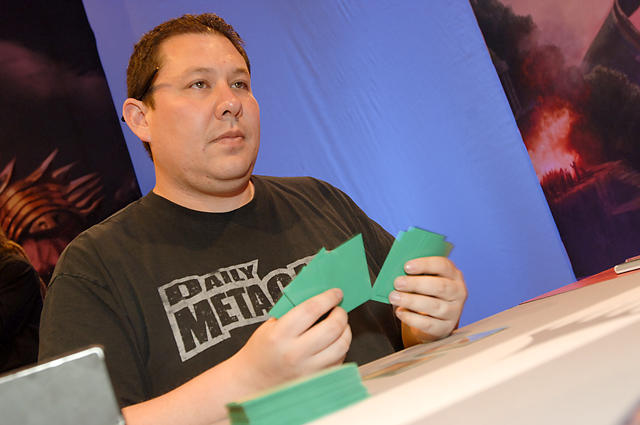 In Game 1, Rivera defeats Flash in a flash.

Zheng cursed himself a bit under his breath, holding plenty of answers to the combo but assuming he was playing something of a mirror match.

"Bad read," he said, reaching for his sideboard before other players in the feature match area had even played a land. "I thought you were on blue, white, red for a second. It cost me the game."

Instead, Zheng was ready right from the start. The players parried over Zheng's Spellskite in the early turns, but Rivera was forced to let it go, resigned to a significantly longer game two.

Granted, it would have been difficult for it to go any shorter.

With Spellskite protection, Zheng felt much safer trying to run out Geist of Saint Traft. Remand short circuited that plan, but he was clearly on the right game plant this time around.

The Spellskite wasn't long for this world, taking a Path to Exile and paving the way for Geist of Saint Traft. A short counter war, in turn, let Rivera resolve Restoration Angel in order to hold off the spooky hexproof three-drop.

And there they sat for several turns, Rivera's Angel and Walls staring down Geist of Saint Traft while their controllers built up mana. Occasionally they fought over a Spellskite here or a Cryptic Command there, but mostly creatures stayed on their side of the field. 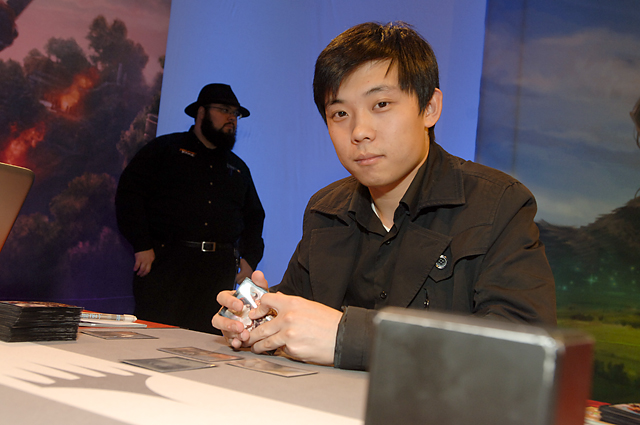 Zheng slows the match to the pace of play that his deck prefers.

After a few turns of this, Rivera made a move Zheng couldn't parry, landing Splinter Twin on...Wall of Omens?

Yes, he was using his combo card as a card drawing engine, one of the advantages of the white splash in the Twin decks. Even if he wasn't winning on turn four, he could play a passable control game with a combo finish.

With a personal Howling Mine in play, it was only a few turns until another Restoration Angel, Lightning Bolt, and a Snapcaster Mage dealt enough damage to send Rivera on to 11-3, in large part thanks to one not-so-small mistake.

4 Deceiver Exarch 3 Anger of the Gods