Round 15: The Final Points

hen Dominik Prosek and Chris Fennell met at the feature match table, they were sitting down for the most important match of their lifes. Sitting at twelve wins and three losses each, a win would put them at 36 points, one intentional draw away from a coveted Top 8 slot.

Prosek, a PTQ winner from the Czech Republic, is currently 7-1 with his burn deck. While most of his cards are red, he is splashing white for Boros Charm and black for Bump in the Night. Taking out his opponents before they can muster a winning board has worked for him so far, but would his unconventional deck choice get him into the Top 8?

Fennell finished in the Top 16 of Pro Tour Dragon's Maze, but most of his success has been on the Grand Prix Circuit. He won GP Washington 2004 with his team, and recently made the finals of GP Indianapolis 2013. Fennell is known for his Limited game, but he is also 7-1 in Modern after joining Team TCGPlayer for this tournament. His deck is as different from Limited Magic as it gets: Fennell is on U/R Storm.

This matchup was coming down to a race between Fennell's combo kill and Prosek's burn spells. Would Fennell find a lethal Grapeshot before the 3- and 4-damage spells of Prosek finished him off?

Fennell won the die roll and went to 19 to find an Island with Scalding Tarn before casting Sleight of Hand. A suspended Rift Bolt by Prosek revealed that he was on a burn plan. Fennell had saved two life by fetching out the basic land, but followed up with a Shivan Reef to cast Pyromancer Ascension. This put him to 18, and Prosek made that 12 with Rift Bolt and Bump in the Night. Another Shivan Reef allowed Fennell to cast Faithless Looting as well as Goblin Electromancer, going to 10 in the process. That life total was not for long though, as Prosek used his untapped red source for Lightning Bolt.

The following turn presented a big decision point for Fennell. Prosek had cast a Goblin Guide which revealed a Faithless Looting upon attacking. Fennell wanted to untap with his board of three lands, Ascension, and Electromancer, but was only on 7 life. Could he go down to 5 by not blocking, activate one of his Shivan Reefs and win the following turn? Or should he trade the 2/2s to play around two burn spells, losing the mana advantage? 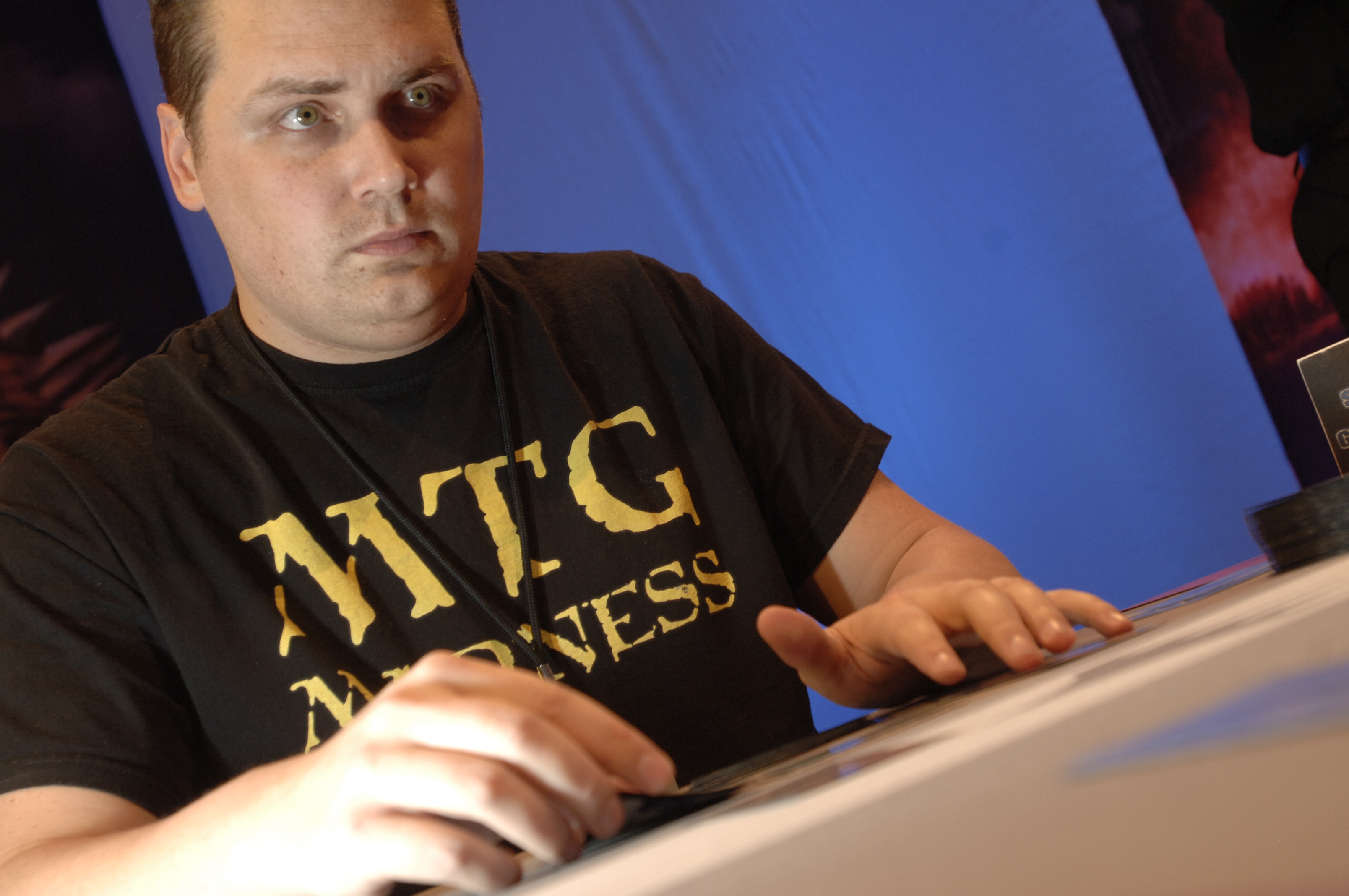 With Fennell's lands damaging his life total, each Shivan Reef activation was particularly tense in his fight against a burn deck.

Fennell knew that this decision would most likely decide the game. Ultimately, he decided to risk it. "No blocks, I'll go to 5", he declared. Prosek passed the turn, but an Arid Mesa meant that he would be able to cast a lethal Boros Charm should Fennell be forced to take one from his Shivan Reef. Fennell untapped and drew the previously revealed Faithless Looting. With a sigh, he tapped his Shivan Reef for Red. "I go to 4."

Prosek could only Shrug.

Two Pyretic Rituals and a second Faithless Looting activated Pyromancer Ascension. A Past in Flames allowed Fennell access to his graveyard, and Sleight of Hand, Faithless Lootings, and the copies provided by the Ascension made sure that Fennell found a lethal Grapeshot.

Dominik was on the play for Game 2, with both players again keeping their starting hands. A Vexing Devil took Fennell down to 16, who went with a pain-free Island into Serum Visions for his first turn. A second Vexing Devil and Bump in the Night took Fennell down to 9. Playing a Mountain, Fennell ensured that he would stay at 9 while casting Pyromancer Ascension, potentially setting up a turn 3 combo turn. When Prosek only played a tapped Blood Crypt, it looked like Fennell could take the match next turn. However, he only had a Scalding Tarn, a Sleight of Hand, and a Goblin Electromancer to play. Fennell passed the turn.

"End of turn Skullcrack", was Prosek's response. He revealed his hand of two Shard Volleys to his opponent, and it was on to Game 3.

Shivan Reef made an appearance once again, taking Fennell down to 19 as he cast Serum Visions. Prosek reduced that to 16 with a Bump in the Night, which signaled that he wasn't holding the more powerful Vexing Devil. For the third game straight, Fennell had a turn two Pyromancer Ascension, looking comfortable at 15 life. Prosek dropped an Arid Mesa but had no play for his turn. He had kept his opening hand, so Fennell could be sure that there would be burnspells waiting for him or his Goblin Electromancer, should he cast one.

Fennell went with a Serum Visions, putting the first counter on Pyromancer Ascension. "It's crazy, giving you a whole turn is better than playing this untapped", he remarked as he played an untapped Steam Vents and passed the turn. Would Fennell's conservative life total management lead him to victory?

Prosek went to 14 to cast Boros Charm, taking Fennell down to 10, but simplifying Fennell's task of conjuring a lethal Grapeshot. Bump in the Night and Lava Spike meant that Fennell was at 4 heading into his fourth turn, with an Arid Mesa representing a lethal 3-damage burnspell should Fennell use his Shivan Reef for colored mana.

As it turned out, Fennell did not have to. A third Serum Visions, cast off the Island, activated Pyromancer Ascension, and the Mountain allowed for a duplicated Faithless Looting. With Steam Vents and Shivan Reef still untapped, Fennell found Manamorphose to generate the colored mana he needed while drawing into more rituals and card draw. "I'm done with my lands," he commented as he tapped out and started going through with the combo.

A few Sleight of Hands later, Fennell had found a lethal Grapeshot, sitting comfortably at 4 life. Prosek was forced to extend his hand in defeat, revealing the Shard Volley he had been holding. 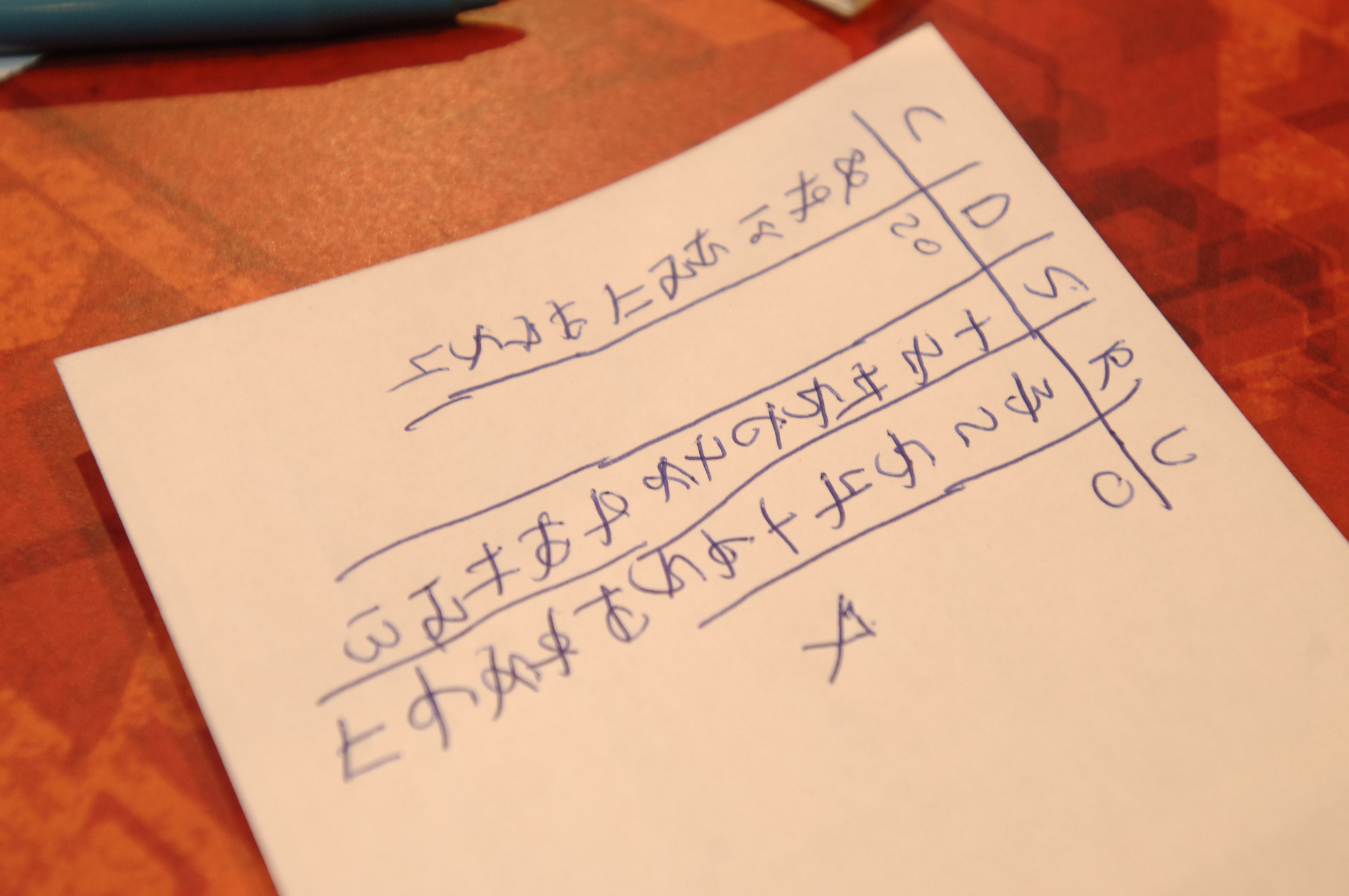 The final totals, with the fourth life point deciding whether Fennell would be burnt to a crisp or storming up a victory.

In the end, a single point of life decided the game, the match, and who would most likely advance to the Top 8 of Pro Tour Born of the Gods.

3 Past in Flames 3 Empty the Warrens
57 Cards