verything is on the line as the big clock in the front of the room is reset to the fifty-minute mark for the final time for this Pro Tour. At least two of the spots in tomorrow's Top 8 were still up for grabs, and nothing was settled yet as far as how the Top 16, Top 32, and Top 64 would shake out. Anything could happen, and it would all happen within these final fifty minutes.

This particular match featured one of the most consistent decks in the format, the incredibly redundant U/R Twin deck, piloted by the consensus best player in Canada, No. 14 Ranked Player Alexander Hayne. It also featured one of the most volatile decks in Modern, Hexproof Auras, piloted by Spaniard Saul Aguado. Both decks are capable of explosive wins, seemingly out of nowhere. Due to the nature of the Hexproof deck, which is designed to avoid having to interact with an opponent, this match-up often turns into a big goldfishing contest. In this case, the winner of the contest would secure themselves a spot in the Top 50, while the other would likely fall out of the Top 64. 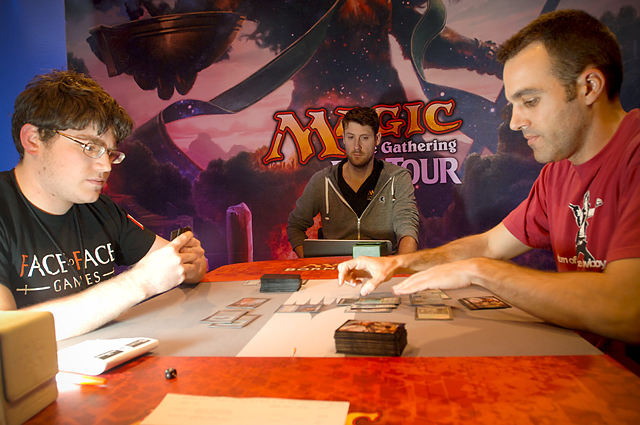 With anything capable of happening once the final standings are posted, both Saul Aguado and No. 14 Ranked Player Alexander Hayne had a lot of potential riding on this match. A win means more prize money at the end of the day and more Pro Points, but a loss could be devastating.

Aguado won the incredibly important die roll, winning the right to goldfish first. His draw was incredibly potent, featuring a first-turn Slippery Bogle and plenty of pants for it to wear. Rancor and an Ethereal Armor allowed it to attack for 5 on his second turn, and it wasn't going to stop there. The next turn, it picked up an Unflinching Courage, attacking for 9. Hayne had done nothing but play three lands before the third attack finished him off. The game took all of four minutes and thirty seconds, and a good portion of that was honestly wasted time. 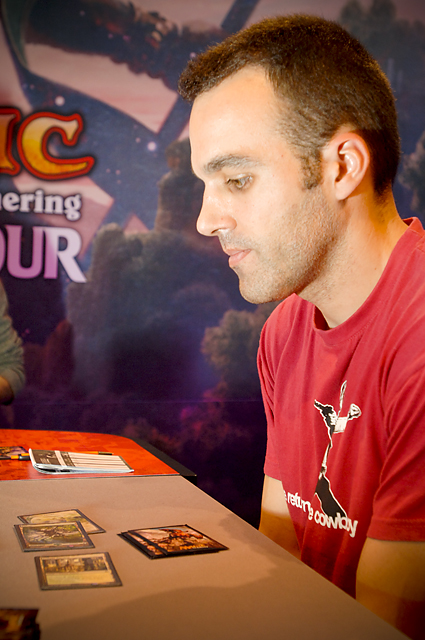 The second game didn't even look at the brake pedal. Once again, Aguado lead with the untouchable Slippery Bogle and a pair of enchantments to make it a monster, this time two Rancors. This time, however, Hayne was prepared, playing and blowing an Engineered Explosives to kill it. Aguado rebuilt, this time loading up a Gladecover Scout. Hayne had played a Spellskite to absorb the auras, but chose to let Aguado go ahead and put them on the Scout. 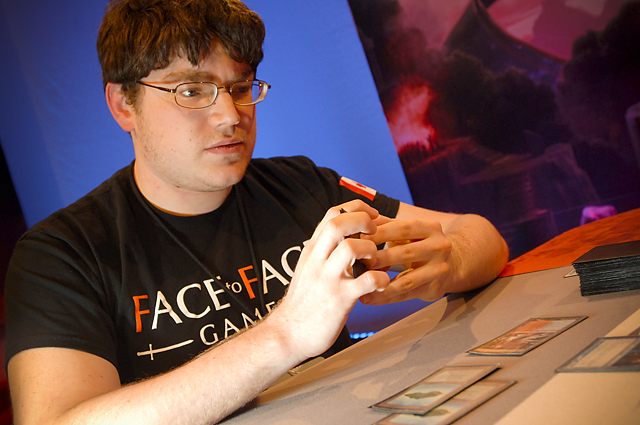 Hayne attempts to battle his way out of a rough match-up.

On the sixth turn of the game, Hayne made a Kiki-Jiki, Mirror Breaker, to go alongside the Spellskite, signaling the potential victory on the next turn. Aguado sent his massive, trousered Bogle to try and kill Hayne, but the Canadian Pro Tour champion used Kiki-Jiki to copy his Spellskite, giving himself just enough toughness to survive at 1 life. He drew his card with a flourish and squinted at it.

"Are you sure you wouldn't like to draw?" Hayne asked.

Hayne shrugged and revealed his hand, which was noticeably devoid of anything to combo with the Kiki-Jiki. Without the combo kill, he was dead on board to the massive Bogle. The match was over before at least one of the other matches in the feature match had hit turn five of their first game, all thanks to the terribly explosive power of Bogles and a good pair of trousers.