s Day One drew to a close, three players clung to perfect 7-0 records, looking desperately to extend their undefeated streaks into Day Two. All three were playing unique combo decks, serving to both highlight the variety of Modern and illustrate the impact that Jund had in controlling the tide of combo. Germany's Patrick Dickmann and American Michael "ShipItHolla" Hetrick drew the short straw, forced to play each other and ensuring that one of the two of them would pick up their first loss on the weekend.

Dickmann's Twin list is a bit of a departure from the standard U/R or U/R/W versions of Splinter Twin that we are used to seeing at these professional-level Modern events. Instead of dipping into white for the Restoration Angel/Village Bell-Ringer combo, Dickmann and the teammates that chose to follow him opted to play green to gain access to Tarmogoyf.

"The deck is typically very fragile," he explained, "and most opponents are prepared for them. Adding Tarmogoyf effectively always gives us a 4/5 and helps us deal more damage to our opponents. We can attack for the win more often than not, and we always have the option to go with the Splinter Twin combo if we put it together instead."

On the other side of the table, Hetrick was playing a combo deck that got a boatload better with the departure of Deathrite Shaman: Living End. Without the powerful one-drop to keep graveyards in check, Living End has lost one of its main predators in the format, giving it the boost it needed to rise from the middle of the pack to the top, and take Hetrick along with it. He has been playing and streaming the deck for the better part of a year now, and his practice with the deck has obviously paid him dividends. 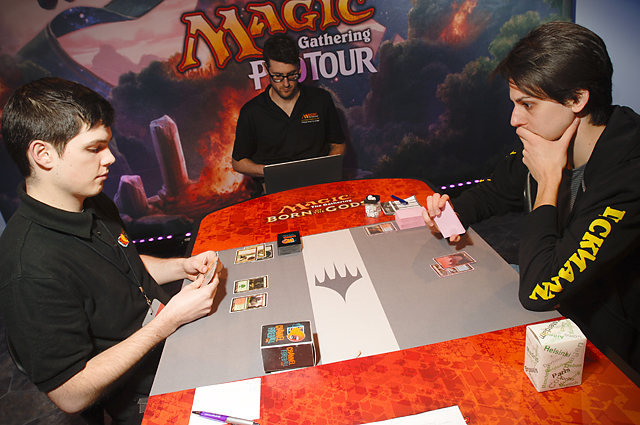 Both Patrick Dickmann and Michael Hetrick, at 7-0, are showcasing the diversity of combos one can play to a great finish in the Modern format thanks to the hit Jund took from losing access to Deathrite Shaman.

Hetrick spent the early turns of the game doing exactly what Living End does, cycling cards and trying to fill up his graveyard for the eventual return of his creatures. He struck on the third turn, casting a Violent Outburst during Dickmann's upkeep. This forced him to spend his turn to Remand Hetrick's cascaded Living End, effectively giving Hetrick a free turn. On his turn, Hetrick struck again using the same trick. This time, the Living End resolved, sending Street Wraith, Monstrous Carabid, and Deadshot Minotaur into play. Dickmann, who was trapped on two lands bought himself a turn with a pair of Lightning Bolts, but he once more failed to draw a third land and scooped up his cards with a look of frustration on his face. 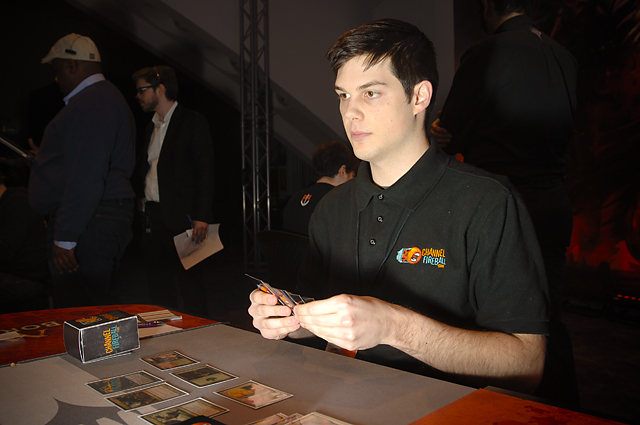 Hetrick's Living End leads him to a hasty first-game victory.

The fairly one-sided Game 1 was followed by a much more interactive version of Magic for at least the early portion of Game 2. Hetrick started filling his graveyard early into this game, cycling Architects of Will and a pair of Monstrous Carabids over the early turns of the game. Dickmann wisely chose to stymie Hetrick during his third upkeep, using a Deceiver Exarch to keep him from casting Violent Outburst on this turn. In return, Hetrick evoked a Shriekmaw to prevent Dickmann from simply putting a Splinter Twin on the Deceiver Exarch and winning on his following turn. 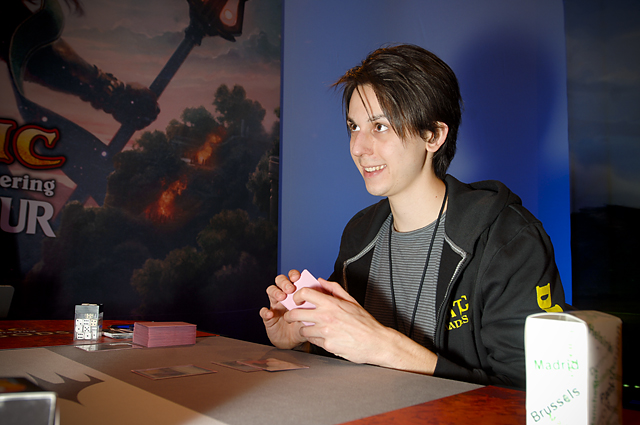 Dickmann makes a game of things, slowing Hetrick's attempt to combo out with a wall of permission.

From that point, things slowed down tremendously, as Hetrick couldn't get a spell past the wall of Cryptic Commands from Dickmann. Eventually, though, Dickmann ran out of answers, leaving Hetrick a window to cast Demonic Dread, cascading into an impressive Living End, and returning 24 points of power to the table with one spell. After Hetrick finished resolving his mountain of triggers, Dickmann took one last stab at a win with an end of turn Deceiver Exarch, but Hetrick simply sacrificed his pair of Fulminator Mages to deny him red mana, to which Dickmann went ahead and conceded.

"I was really surprised that the Living End resolved," Hetrick said with relief.

"I just didn't draw anything at all," Dickmann glumly replied, his otherwise perfect record brought low by Hetrick's Living End.

4 Architects of Will 4 Leyline of the Void