his was an unlikely pairing for this leg of the Semifinals here at Pro Tour Born of the Gods. Anssi Alkio's U/R Splinter Twin deck found itself facing a nightmare scenario in the Quarterfinals, staring down a pair of Vedalken Shackles and a Blood Moon, yet he was able to deftly maneuver the quagmire, pulling out a stunning victory over Lee Shi Tian. Jacob Wilson, on the other hand, was matched up against Chris Fennell and his U/R Storm deck, a match-up that should traditionally pose quite a problem for Melira-Pod decks like Wilson's. Instead, Wilson absolutely crushed Fennell, winning his match in an impressive two games. 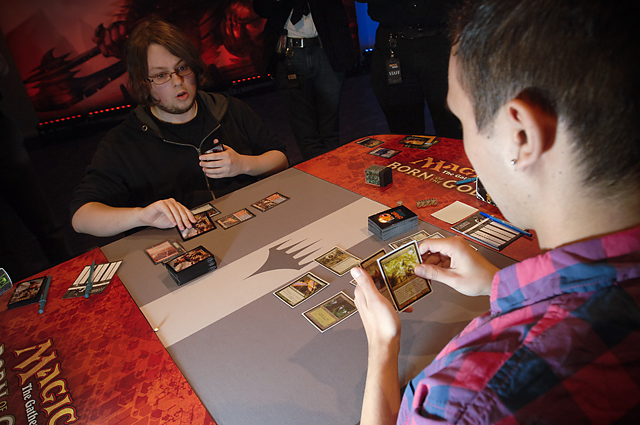 Both Anssi Alkio and Jacob Wilson overcame insurmountable situations in thait Quarterfinal match. Now, the two players collide to see who will venture onward to the Final.

As the higher seed, Wilson was on the play, incredibly important in this match-up. Without an early Birthing Pod, Wilson was forced to adopt an aggressive role, playing Kitchen Finks and Voice of Resurgence and beginning his attack. Alkio, meanwhile, had the pieces of his combo in hand, all he needed was the time to get to five mana to cast Kiki-Jiki, Mirror Breaker. His Deceiver Exarch would serve perfectly for that, providing a tough blocker, in addition to its role in the combo. Wilson wasted little time ending that scenario, using Abrupt Decay to destroy the Deceiver Exarch and returning the Decay with Eternal Witness, just to be on the safe side. Killing the Deceiver Exarch also cleared the way for his attackers, and he was able to drop Alkio to 11 with a large amount of pressure on the table.

A great deal can happen with two free turns, especially when Splinter Twin is involved, so Wilson forewent an attack in order to cast Chord of Calling to fetch out a Linvala, Keeper of Silence. Linvala is the perfect answer to Splinter Twin and Kiki-Jiki, and not too terribly difficult to pull out of the Melira-Pod toolbox. With Linvala on the table, Alkio's only answer is to use two removal spells or cast a Cryptic Command to bounce it. Neither of those was an option, and Wilson was easily able to attack for the win without making the slightest move to assemble his combo. 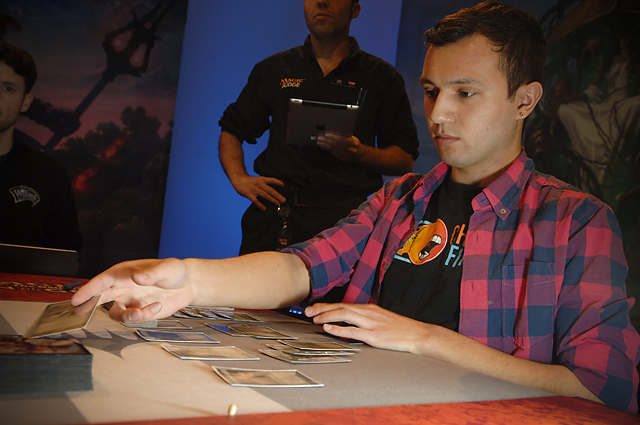 Wilson's Pod deck is capable of conjuring up some very dangerous creatures in an instant, all thanks to the utility found in his Birthing Pod's deck-searching capabilities.

Both Wilson and Alkio had a tremendous amount of help from their sideboards, each with close to a dozen cards that would improve this match-up. Perhaps the biggest threat out of all comes from Alkio's sideboard is Blood Moon, which can completely shut down Wilson's deck. On the play, Alkio managed to get the powerful enchantment into play on turn three, before Wilson had played a third land. A Lightning Bolt and Flame Slash made short work of Wilson's only other threats, a Wall of Roots and Noble Hierarch, and the game looked locked up in the Finn's favor. Wilson had a handful of very impressive Mountains in play, while Alkio simply dropped a Batterskull and began to push for an end to the game. Wilson's deck failed to deliver one of the four basic lands it contained, and he conceded without having played more than two spells in the game.

When nineteen of the twenty-three lands in your deck are nonbasic, a second-turn Blood Moon is going to do some serious work, especially when none of your early land drops are fetch lands, which would at least attenuate the threat. To make matters worse, Alkio's draw was nearly perfect, containing the removal spells needed to get rid of Wilson's mana-producing creatures. Without an Abrupt Decay on the spot, Wilson was completely helpless. 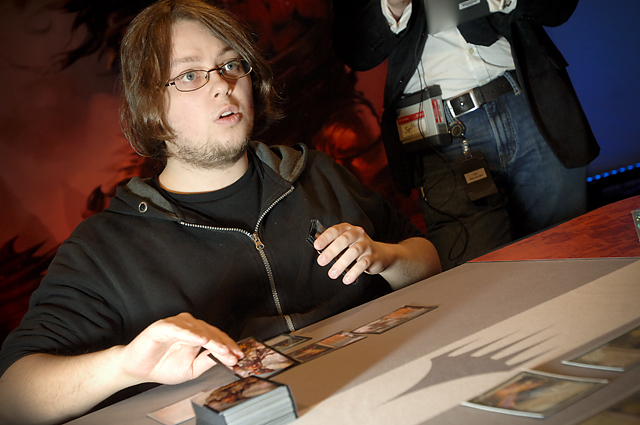 Alkio also has a few haymakers that are capable of ending games in this match immediately.

Wilson returned to the play in the final game of the match, opening with an incredibly important Noble Hierarch on the first turn. Alkio was well aware of the druid's importance, willing to pay three life to fetch a Steam Vents out of his deck, allowing him to Lightning Bolt it. Wilson simply replaced it and added a Birds of Paradise alongside it on the following turn.

While Wilson was accelerating, Alkio was hitting a wall. His hand, stocked as it was, contained no lands. He was forced to cat Serum Visions on his turn to search for some, forcing him to forego the chance to Electrolyze Wilson's two mana producers. Wilson was free to untap, giving him leeway to add a Kitchen Finks to the table. Alkio was way behind, dropped to 14 just a few short turns into the game.

One turn too late, Alkio aimed an Electrolyze at Wilson's creatures, adding a Flame Slash on the Voice of Resurgence for good measure. This left Wilson with five power of creatures on the table still, so the Finn wasn't out of the woods yet. Alkio was tapped out when Wilson drew a Birthing Pod, a dangerous place to be. Wilson attacked Alkio down to 9 before paying 4 life to cast Birthing Pod and use it to search out Linvala, Keeper of Silence. Alkio wasn't anywhere near as dead to the card as he was in the first game, but it still represented close to lethal damage on the following attack.

Alkio held a pair of Snapcaster Mages in his hand, giving him access to the Flame Slash in his graveyard, which he quickly used to remove Linvala. He also used his Tectonic Edge to keep Wilson off of white mana. Still, the problem was less the Linvala or the other lands than the Birthing Pod Wilson used to transmute his Finks into a Murderous Redcap. It would only go up from there, allowing Wilson access to the Reveillark in his deck. Combined with the Murderous Redcap that followed it, the Reveillark represented lethal damage in a number of ways, allowing Wilson to either simply attack for lethal or recur his Murderous Redcap to finish the job. It was a perfect catch-22, allowing Alkio to choose his method of death. He chose to kill the Reveillark, allowing the Murderous Redcap in Wilson's graveyard to live up to its name. 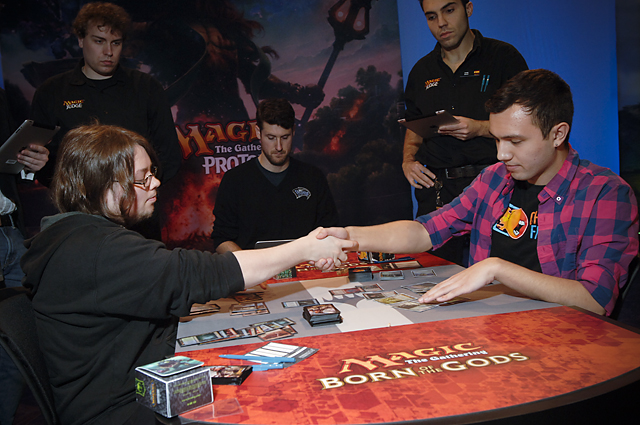 In a back-and-forth match of cards-the-opponent-can't-beat, it was Wilson who had one haymaker too many, allowing him to give Alkio his first Modern loss of the weekend in order to advance to the final match.

"I have twelve sideboard cards for this match-up," Wilson told me after the match. "The games can really change after sideboarding depending on whether they side into a control deck or try to be a better combo deck. I figured he'd go for the control deck, which he did, so I sided out my combo and tried to just grind him out. I didn't expect him to sideboard Blood Moon in, so I didn't play around it and lost the second game. But the last game went perfectly for me."

Jacob Wilson defeats Anssi Alkio 2-1 and advances to the Final!