ro Tour Born of the Gods showcases a Modern format that was radically changed by the latest Banned and Restricted List announcement. Heading into the event, players knew that Jund would be severely weakened by the loss of Deathrite Shaman. In their testing, players had to figure out how dangerous Wild Nacatl decks would be, and if the return of Bitterblossom would turn Faeries or Black-White Token decks into serious contenders.

The most scary decks in Modern are also among the fastest. Zoo shares that part of the metagame spectrum with the more combo-oriented Aggro decks. Infect threatens to kill on turn two, but can be stopped by removal spells. Affinity loses creatures, equipment, and mana sources alike to artifact removal. Hexproof Auras aims to circumvent targeted removal altogether, but is weak to global enchantment removal effects. 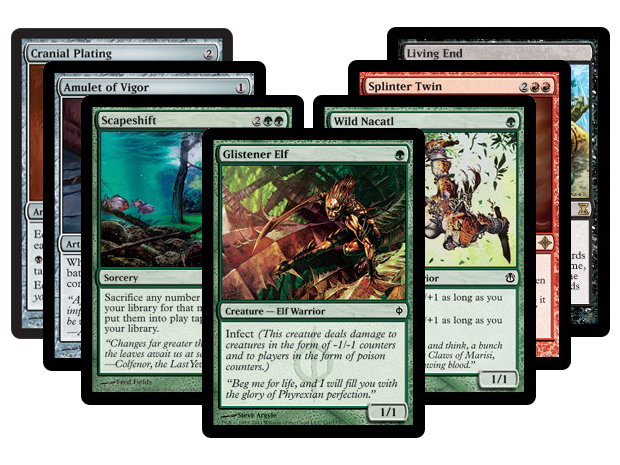 Modern offers a diversity of dangerous threats. How do you best tackle these threats with a fifteen card sideboard?

Dedicated combo decks like Scapeshift, Amulet Combo, Storm, and Living End are generally happy to see creature removal in the opponent's hand. This is different for Splinter Twin and both variants of the Birthing Pod combo decks. However, Splinter Twin combo decks have evolved into tempo decks that can easily win through regular damage, which is even more true of the Midrange Pod decks.

Whether you are playing aggro, midrange, control, or combo, you have fifteen sideboard slots to work with. In a format as vast as Modern, this is generally not enough to cover all bases. It is rare to see a sideboard that does not include multiple one and two-ofs for that reason. The more linear your own strategy, the more costly it is to dilute your deck with answers to your opponents' cards. On the other hand, you might be forced to answer your opponents answer to have a shot at winning.

Some sideboard cards are very versatile, meaning you are happy to board them against a lot of different decks. Other cards are just perfect for a certain matchup, but will not help you in others. Due to the nature of the game, there is a tradeoff between versatility and power: the specific sideboard card will be better than the versatile one, but you will get to utilize it less over the course of the tournament.

There are a few select cards that combine versatility and power. Grafdigger's Cage is a great example of a card that shuts down Birthing Pod and most graveyard strategies. Spellskite is a card that Infect and Hexproof Auras fear, and that stops Splinter Twin from comboing. Add in the fact that you might survive against Scapeshift because Spellskite is taking one (or 7) for the team, and you have a winner.

One of the most popular sideboard cards at Pro Tour Born of the Gods is Blood Moon. Its versatility is rooted in the fact that most decks play relatively few basics. As a result, Blood Moon is a sideboard card that works more or less independently of the opponent's strategy. Still, we rarely see players playing four Blood Moons in their sideboard, because each extra copy you draw is a dead card.

Versatility is certainly a powerful tool for a sideboard card in a format where you have to deal with attacks from a variety of angles.

One of the most interesting questions going into this tournament was which decks should you prepare for and which you should ignore when constructing your sideboard. Playing only versatile cards in a format as powerful as Modern would lead to a decrease in power level after boarding, which is not advisable. Playing only very specific cards against certain matchups would leave you without a plan against others. Playing on the Pro Tour, do you trust your metagaming instincts to make the right call?

Looking at the winning decklists of Friday and Saturday, it is apparent that answers to graveyard-related strategies are in high demand. Grafdigger's Cage is powerful but expected, and it does not stop Living End. If you want to change that, Modern offers Relic of Progenitus, Rest in Peace, or Leyline of the Void.

It is unlikely that you can beat Hexproof Auras with Ray of Revelation, but Back to Nature or Tempest of Light work wonders. If you like your sideboard cards to be more versatile and can afford to play five-mana spells, Fracturing Gust is a great way to cover both Affinity and Hexproof matchups. If you want to go really deep, Porphyry Nodes might be the card to bring in against both Hexproof creatures and Wild Nacatls.

You can always board Thoughtseize to disrupt the combo deck that you did not expect going into the tournament. You can board Blood Moon and catch an unwary opponent. And if you really have nothing to bring in, you can always just win before your opponent does something relevant. After all, the best defense is a good offense.