oel Calafell is something of a torch bearer at Pro Tour Born of the Gods. One of Spain's most successful players ever, Calafell is a veteran of more than 20 Pro Tours over more than a decade of play. Prior to the tournament, Spain Community Manager Ines Alcolea sat down with Calafell to discuss his time on the Pro Tour, how Spain's Magic scene is changing, and why he keeps having so much trouble getting back to Spain after Pro Tours. 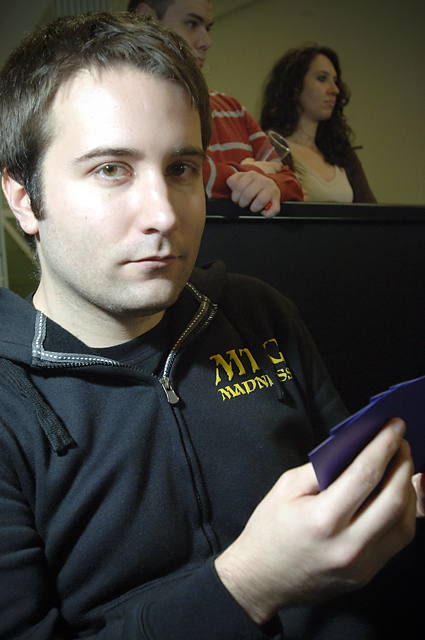 Joel Calafell has a seasoned record in Magic history, including a win at Grand Prix Barcelona back in 2009.

How do you feel playing in the Pro Tour?

Joel: Being qualified for a Pro Tour is always a triumph and makes you feel like you've done well. When I played in my first one in 2004, I felt like I was in a dream. It was an indescribable sensation, and 10 years later I still feel like a child.

How did you qualify?

Joel: I won the last PTQ held this season in Spain, so I barely made it!

How many Pro Tours have you played in?

Joel: With this one in Valencia, I've played in 21 Pro Tours. If you had asked me this question a decade ago, I never would have imagined I'd play in this many!

How do you feel about hosting this Pro Tour in Spain?

Joel: Having the pleasure to host a Pro Tour is always tremendously positive for both the city and the country. Hundreds of players can read in newspapers about "the most important Magic tournament" or they could see the best players of the world. This is a great opportunity to promote the game in Spain, especially for those who have recently arrived to the game are still aware of its potential.

How long have you been playing?

Joel: I have been playing since 2003, starting with Onslaught. My friends gave up playing soon after that, so I had to look for other friends and kept on playing!

Which is the your best Magic-related moment?

What about the worst moment?

Joel: The losses, mainly the ones you don't expect in those tournaments where you have dedicated a lot of effort. I consider myself an extremely competitive person, and I can't help but think that I've ruined my trip only because I did poorly in my tournament. Luckily, time helps you grow and understand that winning everything is not the norm. Understanding that took me years.

Any special stories from your travels?

Joel: Being trapped in Japan for a week and almost having to beg for money to come back Spain? Travelling train by train to finish in an Italian village in the mountains for three days without having a place to sleep? Having to walk for more than an hour to find a hotel after missing my plane? It seems that coming back to Spain after a tournament may be more difficult for me than it seems!

What do you think about the current state of Magic in Spain? Why do you think that the number of players increases almost daily?

Joel: Maybe I'm not a good analyst as I only play in those competitive events. But, I see Magic growing in Spain a lot every day. I can feel the marketing and communication efforts by Wizards of the Coast working, and I think that adapting to every country's specific needs will make different communities grow! Good work Wizards!

Do you think that Magic will continue growing in Spain despite the economic crisis?

Joel: The crisis has never been something that has hurt leisure activities. People prefer to save in other areas rather than losing their time spent having fun. However, stores are having difficulty with direct sales right now. We're in a time of change and we'll have to wait and see how everything and everyone can adapt to the changes.

Which is your favorite card from Born from the Gods?

Joel: Brimaz, King of Oreskos without a doubt! One of the best cards I've seen for a long time. I may end up playing it everywhere!