ince the earliest days of the Pro Tour, players have been teaming to pool their talents, realizing that banding together with other talented players only serves to strengthen everyone's game. Traditionally, the biggest, highest-profile, and most successful teams have come out of North America and Europe. They have the largest player bases and tournaments, so there has always been a need to find some way to gain a competitive edge.

Asia has always been an area that is associated with lone guns like Shouta Yasooka or loose associations of players that test together, but have never banded together to form a concrete team. Over the last year, however, this association has begun to change. From the year that Tzu-Ching Kuo and the Chinese Taipei national team won the inaugural World Magic Cup, there has been a steady rise in the number of high-level finishes from Asian players from outside of Japan, and a big reason for this has been the formation of Team MTG Mint Card. 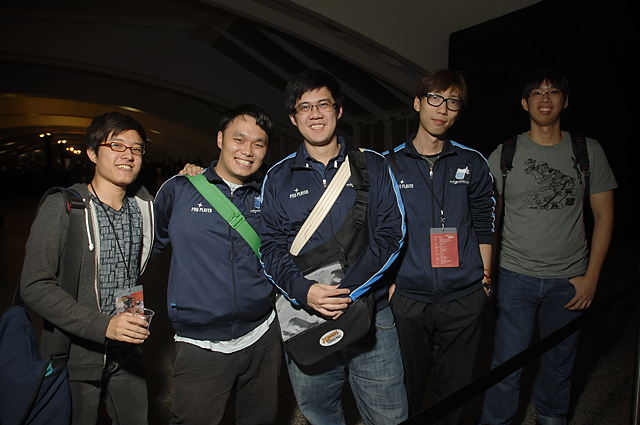 Lee Shi Tian, Tzu-Ching Kuo, and a host of other solid players from Asia including Japanese pro Ken Yukuhiro have teamed up to overcome odds that are stacked against a region that only has a few chances for getting local players qualified.

"At first, the team was just Tzu-Ching and I," Lee Shi Tian said. "We started to work together for Pro Tour Return to Ravnica last year."

It was a wonderful inauguration for the team, as Lee managed to make it to the Semifinals of the Pro Tour before losing to the eventual channel Stanislav Cifka. After this stellar performance, the team began to pick up other notable players from the Asian region. In addition to top players from Chinese Taipei and Hong Kong, Team MTG Mint Card recruited top talent from other countries, snagging Kelvin Chew, Chapman Sim, Jeffrey Chan, and Wei Quan Wong from Singapore, as well as Bo Li from China. The most recent addition to the team has been Ken Yukuhiro, one of the top Japanese professional players.

"We are always on the lookout for new players in our regions," Sim said. "It is very difficult for us to get a large number of players with professional experience. The player base is much smaller and we get less PTQs and GPs than other regions do. That makes it hard to qualify a large number of people."

"We try to do a good job of helping any of the new players from our regions that qualify, too, because it can be difficult for first-timers to know how to do things like book their flights and hotels," Lee went on. "That's why we have Chapman!"

"They are much better players than I am," Sim laughed, "so I try to do whatever I can to prove that I'm at least useful to them."

"Everyone has their own role on the team," Lee explained. "Yukuhiro was our Constructed guide for this event, since this was his deck. Our Limited expert was...also Yukuhiro. He's been doing the best of all of us."

This incarnation of the team marks the largest that the team has been. From its humble beginnings, Team MTG Mint Card is represented by eight players here at the Pro Tour, a number that rivals even the largest and most well-known teams of the world. Half of the players on the team qualified through the Pro Club, while the other half are qualified through winning local PTQs. And the team is performing incredibly well, which is perfect for the members of the team who needed to earn their blue envelopes to get here.

"It can be difficult to test with one another because we live all over Asia," Lee said. "Magic Onlineis certainly a big help. We also get together with everyone for about a week before tournaments so that we can test together and make sure that we are all prepared. That is the most helpful thing of all."

Even though testing amongst themselves can be challenging, the members of Team MTG Mint Card are always looking for ways to improve, and that means broadening their horizons to other regions. Depending on the tournament, they have been linked to a couple of different teams from all over the world.

"At one point we tested with the Canadian team Mana Deprived, which taught us a lot," Kuo said.

"At the last Pro Tour, we worked with Denniz Rachid and Kenny Oberg from Sweden," Sim added, "but their roster was full this time, so we ended up working without them."

This tournament has been an excellent venue for Team MTG Mint Card to demonstrate what they're capable of doing. They are playing a unique deck, crushing opponents, and really crafting a place for themselves in the storyline of the weekend. In a region that can be, at times, out-manned in the Magic world, they represent a collective solidarity that bridges geographical boundaries. They have members that have reached the pinnacle of the game, and they have plenty of new faces joining them every event. In the age of the Internet, the ability to network across country lines grows steadily easier, and Team MTG Mint Card is the perfect example of how communication and organization can work to pull a group of isolated players together and push them to the upper echelons of the game.