oing undefeated in any portion of the Pro Tour is something rare and special. The 3-0 draft, the 5-0 in Modern. Even better, the 6-0 or the 10-0, each stage harder to do than the other. In the ranks of Pro Tours, anyone who can dominate a single stage or format are the fortunate. The One Percent.

So it can't be some kind of coincidence that the Team One Percent fielded three players who buzzed through Modern with pristine 5-0 records, especially considering one of the three isn't even playing the same deck as the other two. 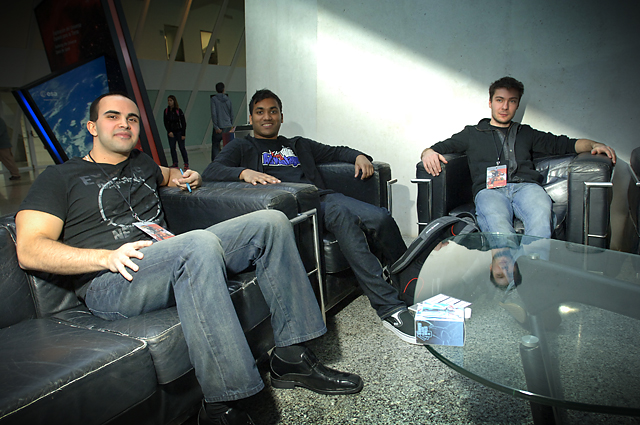 You may or may not have heard of (left to right) Kai Burnett, Sam Tharmaratnam, and Maksym Grym of The One Percent just yet, but give it time. This Canadian contingent is poised to break out in a big, big way.

Kai Burnett, Sam Tharmaratnam, and Maksym Grym are a trio of Canadians who have been flirting with greatness for some time. They've all played in at least three Pro Tours, with Burnett topping out at six. Grym is even a Silver level Pro and finished 11th at Pro Tour Return to Ravnica, missing the Top 8 only on tie breakers. Tharmaratnam, on the other hand, has actually qualified for nine Pro Tours, but, due to MBA commitments, has only attended three. Those commitments are nearly over.

"Sam is the second best player in Canada, behind Alexander Hayne," Grym said.

Tharmaratnam, sitting off to one side didn't flinch. When asked if that was true, he simply said "Well, it's close. Jon Stern has better results because I don't travel to the Grand Prix events."

However, if Tharmaratnam, Grym, and Burnett keep rolling, they might have some results of their own to hang on to instead of being "that other Canadian team."

The question, of course, is how did they do it.

"We jammed games against everything," Tharmaratnam said, describing a wall of more than 20 decks they had lined up at the house they rented in Spain for this event. "What I wanted to learn was what was great."

The team had six members total, with Grym joining the group late in the process after learning only weeks before the tour that the policy change meant he could use his missed invite to Dublin to get to Valencia. Those players battled as much as possible and drafted when they could in an effort, like other teams, to learn as much as possible in as little time as they had.

"Each player became an expert in a deck, played it and reported back," Tharmaratnam said. "For instance, I didn't know all of the lines in Melira Pod, so you didn't want me piloting it. The results wouldn't have looked right."

By doing that, they learned some key facts about the format, including a big-picture look at how the format works as a whole that informed both their deck choices, and the way they built.

"We learned that everyone is at their fastest in Game 1, and they dilute their decks in Game 2 and Game 3 and slow down," said Tharmaratnam.

"Game 1 is about being as proactive as possible. As a consequence, you actually need to be slower for Games 2 and 3," Grym said. "You want your sideboard cards to be absolute blowouts."

As an example he said something like Hexproof Auras needs to be attacked with Tempest of Light rather than Liliana of the Veil. "You want them to pick up all of their permanents."

They also figured out that the bannings definitely shook things up. The removal of Deathrite Shaman and the rise of Anger of the Gods meant that graveyards were safer to operate around and four toughness was key. And with Jund effectively left out of the format, it meant there was more room to just do powerful things.

"Snapcaster Mage, Lightning Bolt, and Path to Exile are just the most powerful things you can do," Grym said.

Likewise, they also figured out what wasn't good.

"Snapcaster is the best card in the format, but we figured out that Bitterblossom was just not good," Tharmaratnam said. "If Faeries is a real deck that changes everything and pushes out a few decks. Because it isn't, then it's important to not lose to Zoo or Affinity. My goal was also to beat W/U/R Control."

Grym credits Tharmaratnam with the deck they're playing (note: the group didn't want their choice revealed just yet) and Burnett has enough faith in Tharmaratnam that he very nearly switched himself. However, the group made one tactical error: they didn't bring enough cards for everyone on the team to play the same deck.

Still, after going 5-0 with a deck that wasn't even really a consolation prize. Burnett played the deck he was tagged as the group expert on, so it's not like he can complain.

The other three members of the team all opted to play decks suitable to what they wanted to accomplish at the tournament, but didn't fare quite as well. Kale Thompson and Edgar Magalhes were out before Day Two, and Richard Kraupa made the second day, but only managed to 3-2 Modern.

Still, when half the team goes undefeated playing two different decks, it's clear they've done something right. It's clear they're part of the one percent.