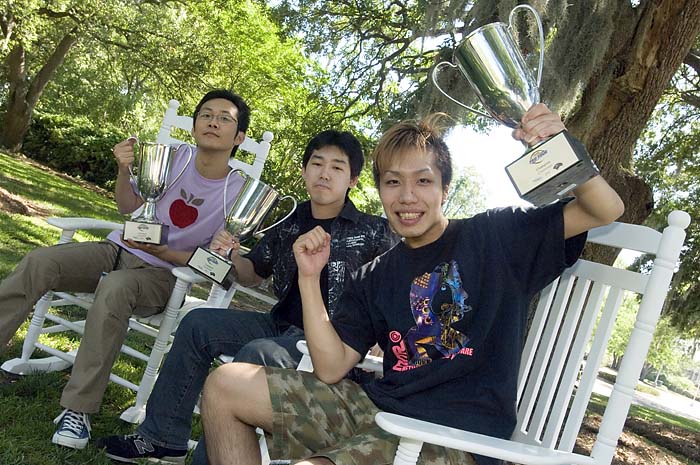 Everyone knows it gets hot in the South, but Pro Tour-Charleston was downright incendiary.

The Japanese team of Kajiharu80 burned through the largest field in Pro Tour history, a tough semifinal matchup against countrymen D-25, and a nail-biting final against Raaala Pumba to win Pro Tour-Charleston.

Vitor's Raaala Pumba put up a valiant fight against Kajiharu80, but he, Willy Edel, and Celso Zampere couldn't hang with the deadly mix of direct damage and Simic Sky Swallowers. Pumba made the Finals by besting the U.S. squad Big Timing with Big Oots, which featured Chris McDaniel, Gadiel Szleifer, and John Pelcak. Japan's D-25, with Ryuichi Arita, Chikara Nakajima, and Kazuya Mitamura, were the other semifinalists.

It certainly was a weekend of firsts in Charleston. Day One opened with a massive 525-person field, easily the biggest in the 10-year history of the Pro Tour. It was also the debut of Team Block Constructed, and featured the first time a female Magic player earned money at a Pro Tour event. But what will be remembered longest is the first Pro Tour wins by Tomohiro Kaji, Shota Yasooka, and Tomoharu Saito.