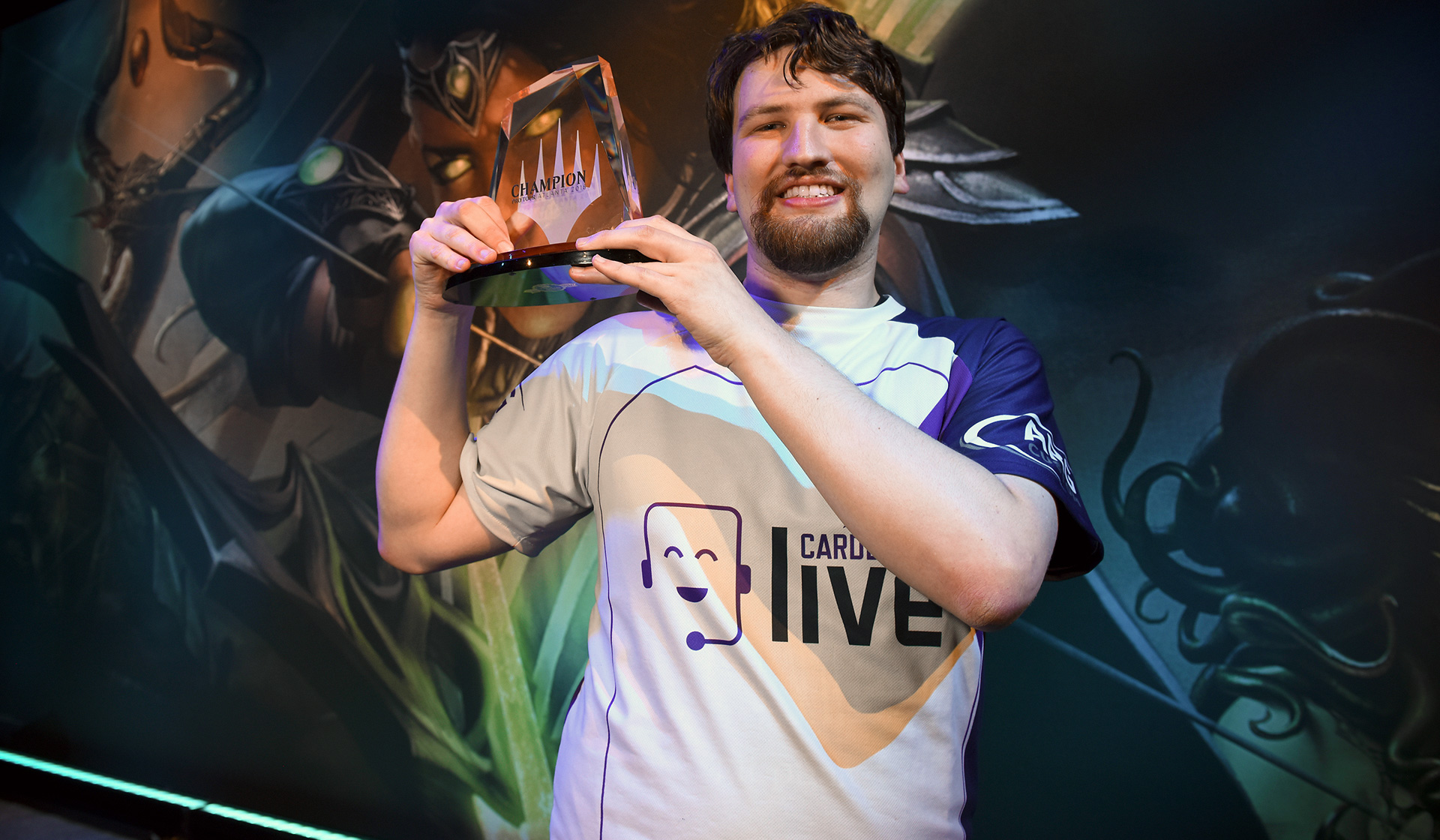 Andrew Elenbogen of Cardboard Live ascends to Pro Tour champion, battling through a gauntlet of difficult competitors to make his first Pro Tour Top 8 one to remember!

The hashtag for Pro Tour Guilds of Ravnica is #PTGRN. Join the conversation.

See Pro Tour Guilds of Ravnica as it unravels on the Magic: The Gathering Facebook page!

Breaking through in his first Pro Tour Top 8 as the sole 36 match point player at the end of the Swiss rounds to survive the cut, Andrew Elenbogen of Cardboard Live made this Pro Tour one to remember.

After fighting in a match where he was uncertain if he had hopes of playing on Sunday, Elenbogen’s name was the only one called among the 36 match point finishers called in the Top 8 announcement, giving him his shot at a Pro Tour title in his fourth Pro Tour appearance, and one he gladly took on his path to a $50,000 first place prize.

His Sunday was not easy, as he had to defeat a rough matchup, one of the Pro Tour frontrunners of the weekend, and a Pro Tour legend to get the trophy. He overcame Wilson Mok’s Jeskai Control deck in the quarterfinals, surpassed Tay Jun Hao of Grey Ogre Games in the semifinals, and Luis Scott-Vargas of ChannelFireball in an epic five-game finale.

The weekend was an exciting showcase of a brand new Standard Constructed format and a celebration of 2017-18 title winners and Pro Tour Hall of Fame inductees, but the Pro Tour wraps up for this weekend with the spotlight on Andrew Elenbogen, Pro Tour Guilds of Ravnica champion. Congratulations!

Ravnica has returned to Standard, and the beloved plane has delivered yet again. Pro Tour Guilds of...

The Top 8 of Pro Tour Guilds of Ravnica is set! Check out what Standard decks they brought to battle...

After sixteen rounds, eight players remain in the running for glory, fortune, and the title of Pro Tour...

Andrew Elenbogen was on a roll. After narrowly escaping defeat from the jaws of Wilson Mok's Jeskai...

This is what Pro Tour Top 8s look like at their best—two Pro Tour Champions squaring off in a battle...

"I play all mirrors on the draw. What more could I ask for?" Andrew Elenbogen was in good spirits...

The Top 8 of Pro Tour Guilds of Ravnica contained a mix of veterans and newcomers, and the lower...

The upper half of the Pro Tour Guilds of Ravnica quarterfinal bracket features a pair of interesting...

The Pro Tour is a serious place. Tens of thousands of dollars on the line. Pro Points worth thousands...

Two player finished with 30 (10-0) points in the Standard portion of Pro Tour Guilds of Ravnica, two...

Six players finished with 22 (7-2-1) points in the Standard portion of Pro Tour Guilds of Ravnica, and...

Four players finished with 19 (6-3-1) points in the Standard portion of Pro Tour Guilds of Ravnica, and...

The Top 8 of Pro Tour Guilds of Ravnica features Pro Tour Hall of Fame legends, a veteran, and newcomers to the Sunday stage. Yuuya Watanabe of Musashi and Luis Scott-Vargas of ChannelFireball from the Hall of Fame added fifth and ninth Top 8s to their resumes, while Jérémy Dezani returns to Sunday five years after his win in Dublin.

Tune in to twitch.tv/magic on Sunday at 6 a.m. PT/9 a.m. ET/2 p.m UTC to find out which of these eight players will be crowned Pro Tour Guilds of Ravnica champion!

Shaheen Soorani, as a long-time face at Pro Tour, Grand Prix, and beyond, is known for one thing in the...

Vance Morgan wants you to know his son's name, and his story. About the great moments of Dustin Wade...

Day Two of the Pro Tour is always the hardest draft for players. A 3-0 start can make or break a run...

Ted Felicetti also knows what it's like to win. As a member of the band Split Fifty, he toured...

Jérémy Dezani of Hareruya Sword and Tay Jun Hao of Grey Ogre Games lead the field at Pro Tour Guilds of Ravnica in Atlanta, Georgia with 8-0 records! Tune in Saturday morning to twitch.tv/magic at 9 a.m. local time (ET)/6 a.m. PT/2 p.m. UTC to see if they continue their winning streaks in Day Two!

You have The Mirari Conjecture, Chance for Glory, Mastermind's Acquisition, Vraska's Contempt, Settle...

The Dungeon Master by Corbin Hosler

They called him the "dungeon master." The "game designer." The kid who would print and laminate his own...

Jeskai Control is the current frontrunner for "best control deck in Standard," and it's obvious why....

Although the Standard rounds outnumber the Draft rounds at every Pro Tour, earning those first 9 points...

Guilds of Ravnica came with rotation for Standard, shifting all eyes forward into the multicolor world...

Player of the Year Playoff Decklists by Event Coverage Staff

Both Seth Manfield and Luis Salvatto brought four Standard decks for a special Player of the Year Playoff. Check out what they brought to the table for this unique showcase below! ...

Playoffs Come to the Pro Tour by Corbin Hosler

"History" is a loaded word in the Magic world. With 25 years of cards and tournaments to match, it's nearly impossible to do something in the game that hasn't been done countless times before in...

Watch Pro Tour Guilds of Ravnica Live on Twitch! Tune in to twitch.tv/magic to catch all the action...