Yesterday, we took a peek across the field to find out what the lay of the land looked like. After eight rounds – three Draft, five Standard Constructed – the player count dropped to 228 to start Day 2. While it's too early to tell if one deck is significantly outperforming others (three rounds of Draft don't speak to Constructed quality!), we can take another look to see if the composition changed. With several decks looking to avoid unfavorable match-ups, how the field stands today will play a significant role in setting the Top 8 stage.

Comparing notes from yesterday reveals that less-represented decks like Naya Planeswalkers, Reanimator flavors, and Green-White Midrange have fallen off the chart. But these weren't the big losers of Day 1.

Here we can see the granular changes in composition and make a few observations:

Many archetypes stayed fairly consistent in their representation in the field. Black Devotion, particularly the versions not splashing a color, and White-Blue Control remained about 17%, with Blue Devotion's 9% and Burn's 7% all flat.

The biggest losers were Red-Green Monsters, mostly led by the drop in Jund Monsters, Green Devotion decks without a splash color, and Planeswalker decks of all types. With both Black Devotion and White-Blue Control holding steady, and White-Black Midrange on the rise (see below) these "bigger" decks may have been caught in the squeeze. None of these decks have been particularly dominant at events in recent months, and their small weaknesses to the more popular decks may be at work here.

Big winners included White-Black Midrange, gaining 2.7% of the field overnight, and Aggro decks of all types. It's hard to say which is working for White-Black Midrange more, its strength against the rest of the field or the fact it's the chosen deck of one of the most potent teams of the weekend, but it's emerged as an archetype on its own nearly as large are Black Devotion and White-Blue Control. Aggro on the whole is similarly doing well, likely in part to the smaller showing by Blue Devotion overall. Decks like Rabble Red and others put pressure on fast, forcing slower decks into awkward positions. Yesterday's feature match between Hall of Fame player Jon Finkel and Pro Tour Gatecrash Top 8 competitor Melissa DeTora provided an excellent example of how quickly an aggressive deck can overpower a slower midrange option. 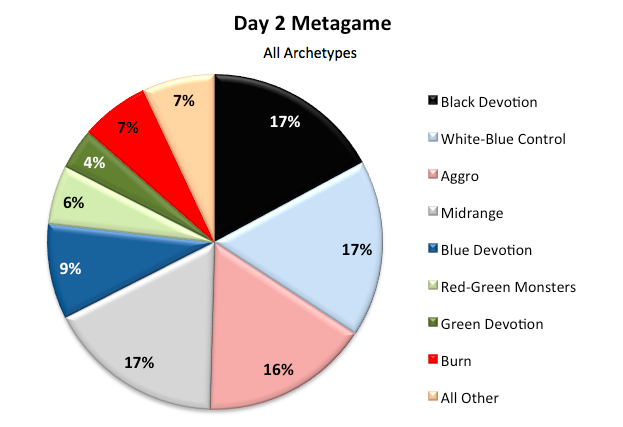 With this diversity of decks at work it's hard to imagine a Top 8 that doesn't reflect how many choices were available to players for this weekend. Which deck will you be looking for at the top tables later today?