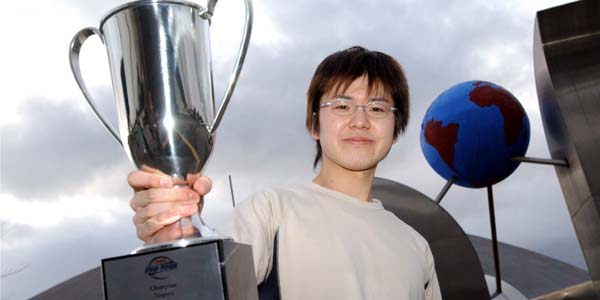 Komuro bested Anton Jonsson in a eye-opening four-game match that saw both players making extensive sideboard changes every game based on who would be playing first.

Kuroda had his shot at back-to-back Pro Tour titles on his home soil but he fell to Jonsson in the quarterfinals. Anton had to fight off Worlds Top 8 alumni Terry Soh, who had dispatched Frank Karsten in his quarters match with a classic bluff, before Shu avenged the defeat of his countryman in the final of the last Rochester Draft event of the Pro Tour.

Randy Buehler and Brian David-Marshall are your guides to all of Sunday's Top 8 action, and Jonathan Becker brings you the rest of the sights and sounds from Pro Tour-Nagoya.

Shu's quarterfinal opponent was Vasilis Fatouros, the first player from Greece to reach Sunday action on the Pro Tour, and the Japanese player worked him over with his splice-happy deck. Murray "The Mauler" Evans came back from the brink of defeat several times against Jarno Harkonen in his quarterfinal matchup before falling to Shu in the semis.

In addition to the sensational matches, players were greeted this weekend by some Pro Tour innovations. From the a hospitality table during registration Thursday night that offered free drinks, snacks, and - most importantly - land for drafting to the swanky, exclusive Player's Lounge where competitors could kick back and watch a movie, enjoy complimentary food and beverages, surf the Internet, or even make long distance calls to friends and family, the change could be felt around the venue. There were even free pens throughout the event!

By the time the hall closed, the Pro Tour players had a new champion, some new friends, and memories of a fantastic weekend in Nagoya, Japan.


Matchups were determined at random. Seeds do not reflect players' standings after Day 2.