Posted in Competitive Gaming on February 7, 2020

Pioneer has been inverted.

It's only been around for a few weeks, but the combo of Inverter of Truth and Thassa's Oracle has taken the Pioneer metagame by storm. It has been compared to the infamous "Splinter Twin" combo, and the field at Players Tour Phoenix has taken to the Inverter combo in much the same way.

Thassa's Oracle is performing across the board. In addition to the Inverter deck, it also functions as the win condition for the Lotus Breach brew, which uses Underworld Breach and Lotus Field to generate copious amounts of mana and use it to churn through the deck before winning with the Merfolk.

Pioneer's traditional staples has shown up strongly well. Spirits, Mono-Red, Mono-Black – all have posted strong numbers this weekend, as has the Sultai Delirium deck that Joel Larsson used to take down Players Tour Brussels last weekend. Further down the list, there are some wild brews, from Vampire tribal to the bizarre Sram deck that Ken Yukuhiro took to the finals of Players Tour Nagoya.

Here's how the entire metagame broke down: 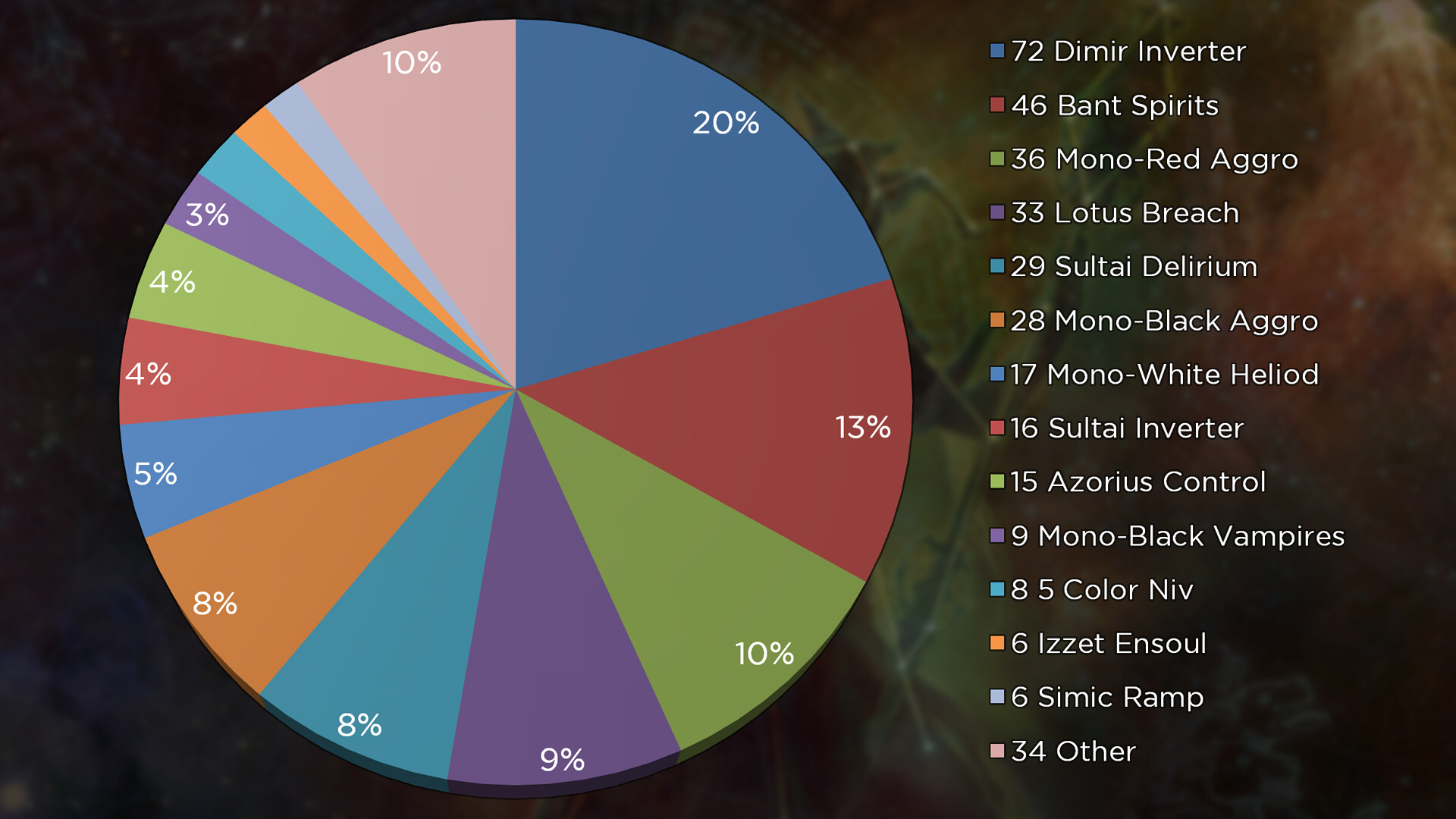 Who Wants to Play Fair?

It wasn't that long ago that the top of the Pioneer metagame was dominated by "fair" decks – that is, decks like Spirits or Mono-Black that primarily sought to slowly and steadily (or perhaps a little less slowly in the case of Mono-Red) reduce their opponent's life to zero. There was even a brief period where Big Red, featuring expensive top-end cards like Glorybringer and Chandra, Torch of Defiance, were leading the way.

But all that has changed in a few short weeks. At least in Phoenix, it seems that most competitors agreed that playing fair was not the way to go. By far, the most-represented archetype was combo, with about a third of the field bringing some form of combo deck.

(Note: Sideboard card quantities will not be published for Players Tour Swiss rounds. Top-performing Pioneer decklists with complete sideboards will be published on Sunday.)

1 Omen of the Sea

2 Drown in the Loch 2 Thought Erasure

There's more than one way to Thassa's Oracle.

1 Blink of an Eye

4 Pore Over the Pages 1 Hour of Devastation

The Changing Shape of Aggression

For much of the young existence of Pioneer, Mono-Black has been the aggressive deck of choice, ranging from Vampire tribal variants to decks built entirely one and two-drops. But by the time players submitted lists for Phoenix, it seems that the black menace has begun to fall out of favor. Backed up by Thoughtseize, the deck was able to contest the combo decks of the format, but in the United States it seems that competitors have opted for a little bit of fire as well.

Thirty-six players brought Mono-Red Aggro to the tournament, just a shade under the number who brought some form of Mono-Black. With the combo decks leaning on Dig Through Time to refill their hands after a barrage of discard spells, many players opted instead to simply fling Wild Slashes to the face.

The Big Red decks of recent weeks have receded. As the combo decks have gained power, red mages have turned to speed to compete. With a litany of early drops and more expensive cards like Torbran, Thane of Red Fell to push through damage, the red decks can rival the combo decks for speed.

Of course, some players are still finding success with Mono-Black, including a Vampires variant that benefits from the power of Sorin, Imperious Bloodlord.

The Best of the Rest

Perhaps nothing leaps off the page more than this crazy Mono-Blue Devotion list designed by Sam Black. While the archetype isn't an unknown entity, Black pushed it in a wild new direction.

That's a lot of mana coming from Nykthos, Shrine to Nyx.

Here's one final treat. Anyone interested in Possibility Storm?

Posted in Competitive Gaming on February 7, 2020