o. 22 Ranked Player Alexander Hayne's deck is fast. Real fast. Like, playing-Bronze-Sable fast. (12) Martin Juza had a fairly standard green-white concoction, but it had reach in both senses of the word. It had both the large creatures that provide inevitability, and also things like Nessian Asp that block flying creatures. Juza said after the match that he feels green is "insane" in the format. Hayne's reach was in the form of Labyrinth Champion, with three Titan's Strength and two Coordinated Assaults to target it...oh, and an Ember Swallower.

If Juza could stop the initial couple waves of damage and be at a high-enough life total to be out of Shock range, he could likely win. But that wasn't going to be easy. 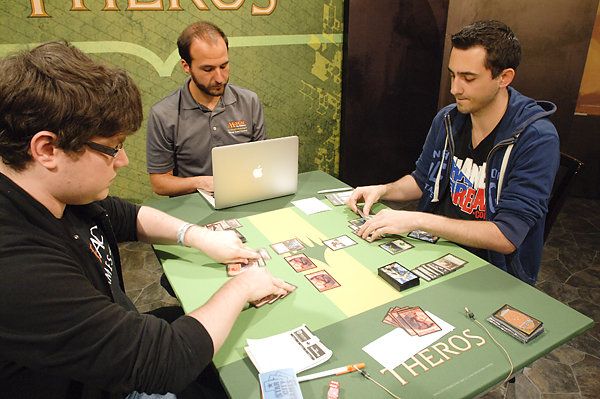 Alexander Hayne's aggressive red deck threatened to put the match out of reach for Martin Juza if the Czech pro did not have a good counter to fast starts.

The first game showcased the power of Hayne's deck. And its very real threats continuing into the later stages of the game. It all started with an Akroan Crusader.

Staring down a Voyaging Satyr, Hayne looked at Juza and said "Attack."

"Holy..." was Juza's response. The Czech blocked with the 1/2 and Hayne showed a Titan's Strength. He took out the accelerator while saving his Crusader, making a 1/1 Solider and getting to scry 1. Juza asked for some Solider tokens. The judge dropped a handful on the table.

"I hope we won't need that many," Juza said.

"Well, we might." Hayne cast a Dragon Mantle, took another Solider token from the stack, and drew a card. He was content.

Despite the mana-accelerator's death, Juza was still able to curve out, and it seemed like he would be able to hold against the board of mostly little guys. Another Dragon Mantle and a Bronze Sable and some friends had joined for Hayne, but all looked silly next to green 3/3s and 5/5s like Nessian Courser, Nemesis of Mortals, and Nessian Asp. Despite the green stop signs, Hayne beat with everyone in the next attack. 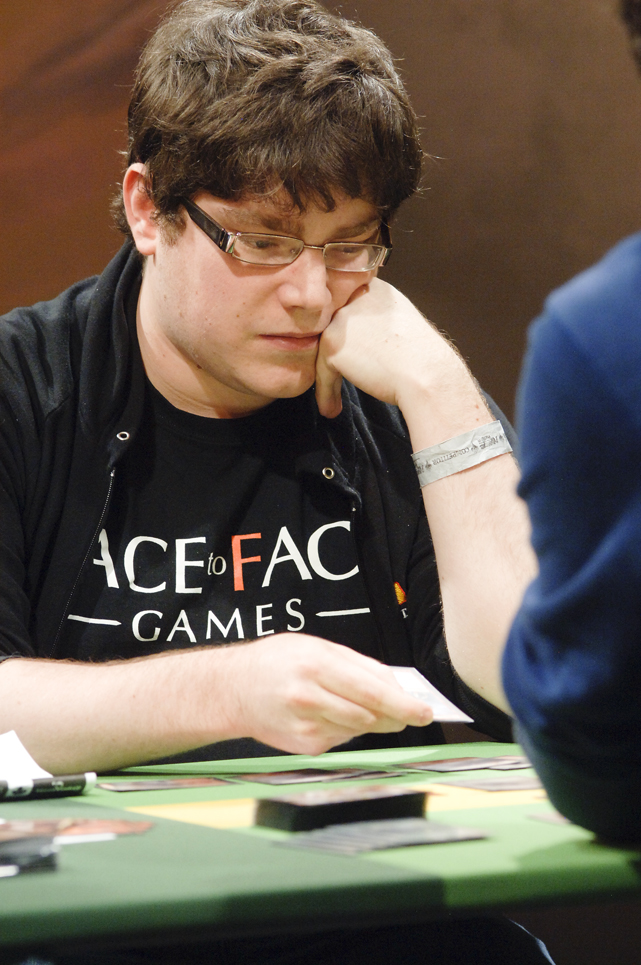 Hayne relentlessly beats down, attempting to put Juza into range of 2 damage.

"Ooh, now we're talking. Jeez. That's impressive." Juza was either impressed by the super ballsy attack, or the reality that Hayne had enough tricks to actually make such an attack work.

During the attacking, Hayne flashed another Titan's Strength and more pump and burn. Somehow, magically, Hayne lost next to nothing and Juza sunk to 10 life. Juza was left with a Nessian Courser. Hayne added insult to injury with a Labyrinth Champion and an Ember Swallower. "Jeez, that's a good one," was all Juza could add.

The next couple turns, Juza was faced with choices. If he decided the wrong way at any time, he could have immediately lost. He cast a Setessan Griffin that he admitted later is a pretty underwhelming card, but there it shined. The Griffin was targeted multiple times by Labyrinth Champion over a few turns. The first turn, Juza chose to use his only in-hand pump spell, Battlefield Valor, to save it. Next, a bestowed Spearpoint Oread posed Juza the choice to either save the "underwhelming" 3/2 flyer, or keep open Divine Verdict mana for either the Ember Swallower or the now-4/4, first-striking Labyrinth Champion. And Juza was currently at 5 life to Hayne's 17.

He thought for a long while, and eventually decided to save the flyer. Juza went to 1. And yes, the Labyrinth Champion was still on the board. It was a tough call, but it turned around the game, giving Juza a shot to win. The Griffin did almost all the damage for Juza over the course of the game. Juza lamented later that the fact that the Akroan Crusader makes hasted 1/1s made it very difficult to ever safely attack at 1 life. At any time the right spell would have just kill him.

With some key top-decks like Mistcutter Hydra, Juza clawed his way back in the game. Over the next few turns, the 6/6 Hydra traded with a monstrous Ember Swallower, then Divine Verdict took out the Champion. And when Juza needed to top-deck a creature to stay at board parity, a Commune with the Gods found another green 3/3.

After the match Hayne and Juza talked about the attack with the Champion; though Juza was down to one card, Hayne felt he should have read the Verdict because of how long it took his opponent to tap out a few turns ago. Hayne would probably point to that as the turning point in the power of the game. 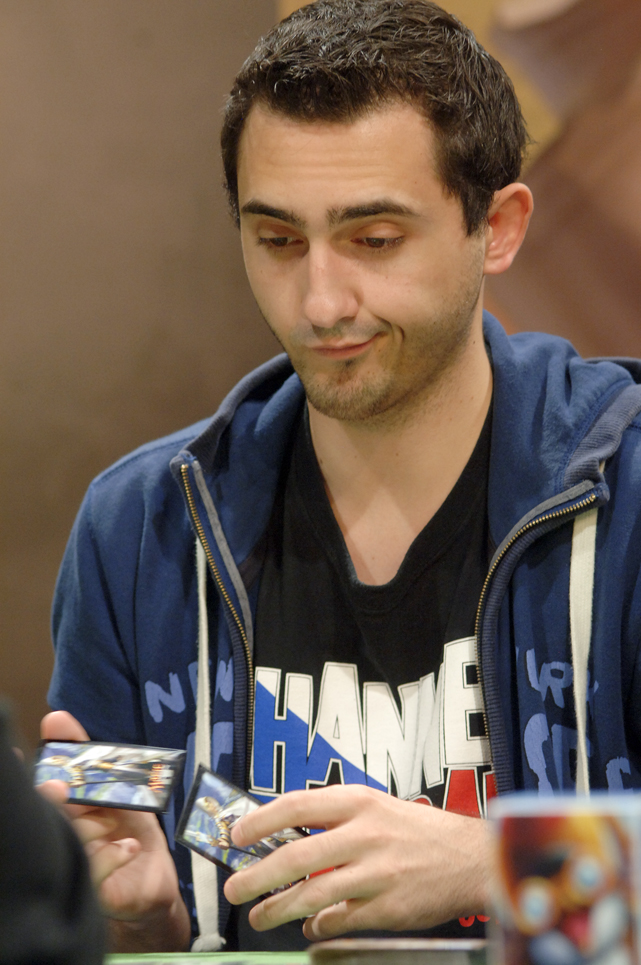 Juza hangs on by a thread.

The Griffin continued hitting the entire time and brought Hayne closer and closer to Juza's own low life total. At three creatures apiece, Juza attacked with his Griffin (and pumped it), appearing to leave himself vulnerable to a counterattack. Hayne looked askance at the two Forests remaining untapped.

"Are you bluffing?" Hayne rhetorically asked. Juza could have just drawn the Savage Surge, or he could just be trying to appear as if he had drawn it knowing he couldn't win without getting in attacks at every possible turn. Juza told me after the match that he had already decided to attack well before he drew for the turn.

Hayne thought it better to stay back rather than attack into the potential Savage Surge blowout and passed the turn. He was right. Juza had indeed drawn the Surge. When talking after the match, Juza said to Hayne that if he were in that same position, "I would have totally killed myself that turn by attacking." Hayne would have lost all three creatures and Juza would've been left with two 3/3s. Juza laughed, recalling the turn, "I was going to make the same play regardless, and then I drew it; it worked out perfectly."

A turn more of no help from the top of Hayne's deck, and the Canadian sunk to 7 life. Juza calmly untapped, attacked with his Griffin and pumped it naturally. Then with the clutch Savage Surge he brought the power to 7 and took the last points from Alex Hayne.

The second game was not nearly as interesting. Hayne kept a suspect hand with Bronze Sable, Stoneshock Giant and many, many Mountains.

When trading off the Sable with Juza's Satyr Hedonist, Hayne mused, "Mine doesn't cost colored mana."

Juza shrugged. "Mine is a sideboard card." The two creatures went to the bin.

The game never really got better for Hayne from there. Heliod's Emissary and Nemesis of Mortals were more than enough to punish Hayne's slow draw. And even though a Rage of Purphoros took out the elk, a Divine Verdict on the 5/4 giant left Hayne with few outs.

Hayne soon tried a last-ditch bluff attack with a Labyrinth Champion, suggesting he had a Coordinated Attack. After the game he commented that even if Juza hadn't blocked he didn't really think the two damage would've really mattered anyway. But after consideration, Juza did block and Hayne scooped up his cards.

After sitting a while and talking after the match, Hayne, when getting up to leave the table said, "That first game was real good."