his round saw the battle between two giants of the game, the No. 2-ranked player in the world against the No. 5-ranked player, both currently on scores of 8-3 and thus on the brink of elimination from Top 8 contention. It was also a showdown between the two top teams in recent history. New Hall of Famer Ben Stark entered the fray sporting the ChannelFireball logo, with Reid Duke representing Team StarCityGames.

Last but not least, it was a fight between the elements, as Stark was piloting his team's mostly red devotion deck, while Duke brought his team's Mono-Blue Devotion deck. 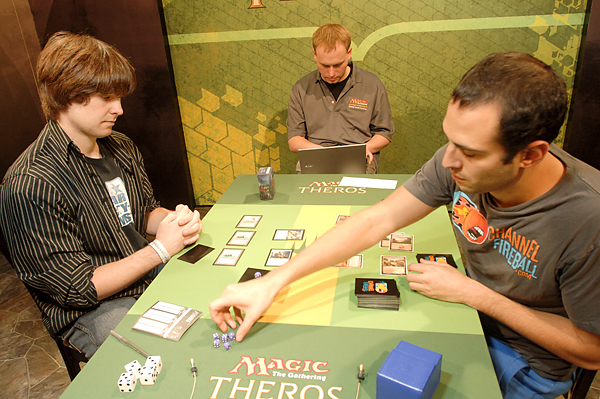 Reid Duke and Ben Stark show down in a match-up that pitted superteam versus superteam, and water versus fire.

For the first game, Duke started with a couple of mulligans...and then continued with a couple more. As Duke began the game with three cards in hand, no one expected him to win this, least of all himself. Going second, he cast Judge's Familiar on turn one, saying, "This is all I got. Can you beat it?"

As it turned out, for a long time it wasn't entirely clear whether Stark could. Duke had Thassa, God of the Sea on turn three, Master of the Waves on turn four, and Bident of Thassa and Nightveil Specter on turns five and six. However, by that point Stark had already cast Burning-Tree Emissary, Hammer of Purphoros, Domri Rade, Boros Reckoner, and Ash Zealot. He was stuck on three lands which made things a little difficult, but in the end he managed to overwhelm Duke. Boros Reckoner did most of the work and another Burning-Tree Emissary plus an activation of Hammer of Purphoros sealed the deal. 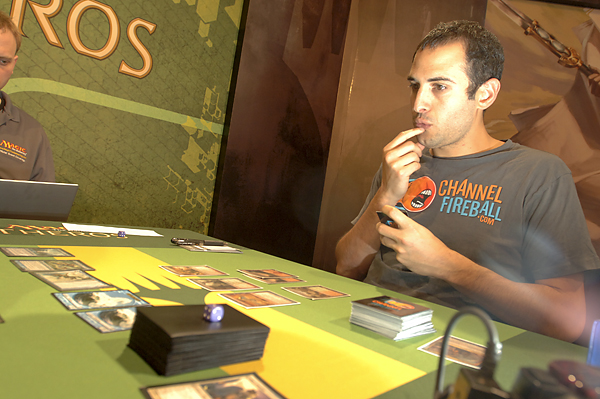 Stark capitalizes on a punishing number of mulligans from his opponent.

"That was quite the game for a mull to three," said an impressed Stark.

Early Game 2 saw a stand-off between a pair of Burning-Tree Emissary on Stark's side and Judge's Familiar plus Omenspeaker on Duke's. Stark cast Ratchet Bomb and Frostburn Weird made him put a first charge counter on it, a move he possibly regretted when Duke cast Master of Waves and put five tokens onto the battlefield. His bomb started to accumulate more counters, going for the four needed to kill Master of Waves itself, but on the next turn Duke summoned a second Master of the Waves, creating yet more tokens and also boosting all of them. Two attacks later, with Ratchet Bomb still at three counters, Duke had evened the score. 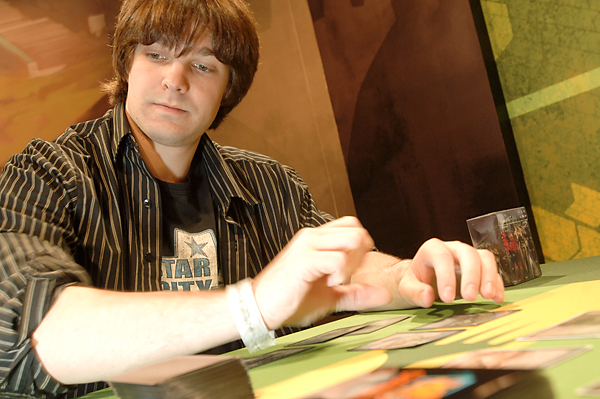 Duke's draws improved in quality in the next games, giving Stark a much more difficult fight.

In Game 3, both players encountered problems with their mana, Duke being stuck on two Islands for a while, while Stark had two Mountains and Nykthos, Shrine to Nyx but couldn't cast anything with it apart from a lonely Frostburn Weird. Duke, however, had three Frostburn Weirds and even a Tidebinder Mage to tap down the opposing Weird. Both players managed to draw some lands after a while, though whereas Duke's deck only needs four lands to operate, Stark's was depending on much more, and under pressure he wasn't able to make any planeswalkers stick around to power his Nykthos. Stark cast and subsequently lost Xenagos, the Reveler to attacks, and then Duke made matters even worse by casting Master of Waves. Nine Elemental tokens later, and the match victory was Duke's.

"I don't know how good or bad this match-up actually is," Stark said afterwards. "I mean, I'm in no position to complain about the draws, but I don't think this match was necessarily reflective of the way this match-up usually goes."