ne of the things that makes Magic such a skill-testing game is the lack of complete information. Each player has cards in their hand that are known to them and them alone. That's why discard can be so key in Magic, as it allows you to play with perfect information, effectively planning for the game plan you expect your opponent to implement. It gives you an incredible advantage.

The two players in this match are both experts at using that information to their advantage, and they're playing decks that enable them to frequently acquire it. Patrick Chapin, Hall of Famer and deck-building mastermind, came to fight with an Orzhov Midrange deck of his own design, packed to the brim with discard spells and spot removal. This incredibly disruptive deck carried both him and Paul Rietzl to near the top of the standings after one day of play, and they have both started strong again today. Chapin's opponent, Grand Prix Champion Christian Calcano, came with the most-played deck in the tournament: Esper Control. This new iteration of Esper Control plays out much like the old one did, using an incredible amount of disruption, removal, and permission to extend the game, closing things out with high-powered threats and crushing opponents under the card advantage of Sphinx's Revelation. 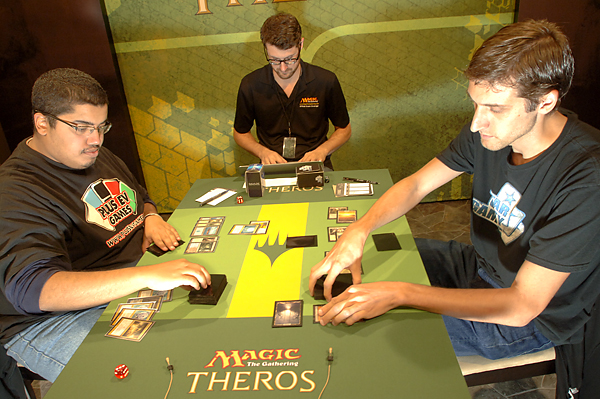 Christian Calcano and Patrick Chapin both have access to discard tools that give them accurate intel on their opponent's hands, making their sequencing of plays much better.

The early part of the first game was dominated by immediate answers to potent threats. Calcano hit first with an Ashiok, Nightmare Weaver, but Chapin had Hero's Downfall. Chapin then tried his hand at a Precinct Captain, but Calcano had Detention Sphere. This pattern continued for a couple of turns until Chapin landed an Obzedat, Ghost Council. The powerful Orzhovan oligarchs are incredibly resistant to most of the removal in Calcano's deck, even more so since he had cycled through three of his Azorius Charms, leaving him with fewer instant-speed answers to the massive threat. Chapin hesitated before making his first attack with the Ghost Council, unsure as to whether or not it was worth attacking. The trio of Charms in the graveyard made the threat of a removal spell much less likely, so Chapin hazarded the attack. Calcano held nothing. When his draw spell also yielded nothing to deal with the currently-ephemeral Obzedat, Calcano conceded, eager to get to a better Game 2.

After losing such an abrupt Game 1, Calcano was obviously displeased to have to mulligan to six to begin the second. Normally taciturn during play, he became even more stoic than usual, especially after a first-turn Thoughtseize revealed the following hand: 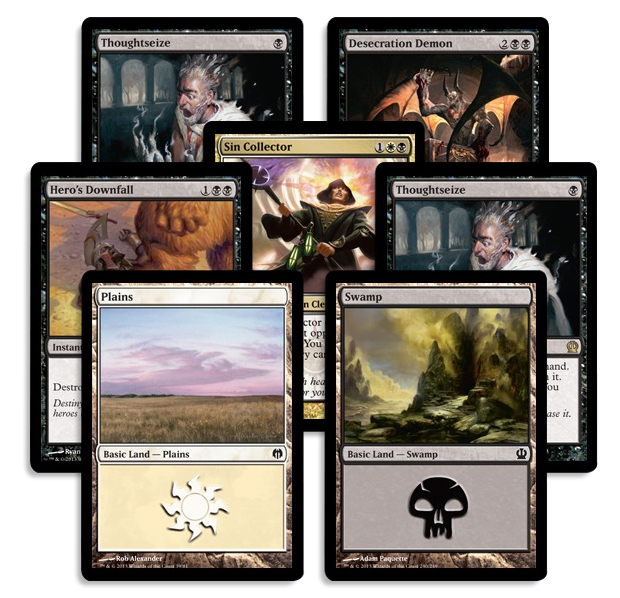 In a vacuum, this hand would be considered quite powerful. Against an opponent who had to mulligan, it is a beast. Calcano took the first Thoughtseize, but the second one stripped him of his only card of value, a Glare of Heresy, from a hand containing nothing else but lands. Chapin even managed to hit gold when he cast a Sin Collector on turn three, revealing that Calcano had drawn a Supreme Verdict and a land in the intervening turns.

Calcano did manage to find himself a ray of sunshine when he resolved a Sphinx's Revelation on a following turn, but it was only for three, and he was up against the remnants of Chapin's monstrous hand. A Thoughtseize a turn later revealed the following hand: 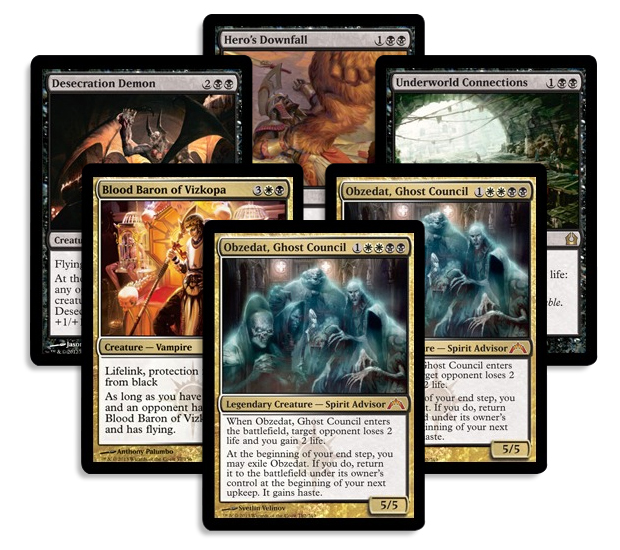 Calcano made the interesting decision to take the Hero's Downfall, leaving Chapin with a hand so full of gasoline that he's not allowed near an open flame. Yet Calcano's draws appeared to have been up to the task of defusing the bombs in his near future. He had a Dissolve for the first Obzedat, quickly scrying away his top card.

"Scrying is so easy in the Esper deck," Chapin joked. "Do I need a land? No? Is it a Sphinx's Revelation? Revelation is like a more dishonest Cruel Ultimatum." 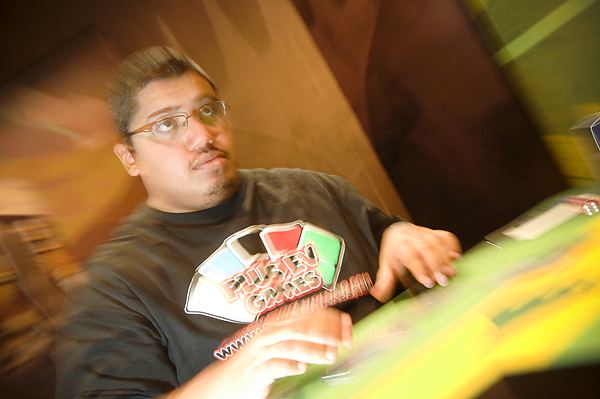 Calcano has been championing Sphinx's Revelation decks in Standard for a while, and Pro Tour Theros gave him no reason to change.

When Chapin resolved his second Obzedat a turn later, Calcano used Far & Away to return the Sin Collector, forcing Chapin to sacrifice his Ghost Council. Second bomb down. This also let Calcano tap out on his turn to Sphinx's Revelation for four, refilling his hand. As much trouble as he had been in earlier, he was drawing himself out of it nicely thanks to the format-defining Sphinx's Revelation.

"Show me what you're workin' with," Chapin said as he dropped the Sin Collector back into play. What Calcano was working with was a hand that had developed quite nicely since the early turns of the game. From nothing but lands, he had picked up a Dissolve, Far & Away, Blood Baron of Vizkopa, and an Elspeth, Sun's Herald.

Chapin chose the Far & Away, not willing to lose his Desecration Demon over it. The picture of the future suddenly looked much brighter for Calcano. Elspeth, Sun's Champion, gave him a way to both defend himself and to continually keep the Desecration Demon tapped. Evenrually, he was able to draw the Blood Baron of Vizkopa out of Chapin's hand, giving him free reign to cast Supreme Verdict, leaving Elspeth, her Soldiers, and a freshly-cast Blood Baron on Calcano's side as the only creatures on the board. It was a strong enough reversal that Chapin was willing to concede on the spot.

Sphinx's Revelation was at one point considered the best card in Standard, and it utterly defined the format for over a year. Since the printing of Dragon's Maze, however, it has seen a downswing in its popularity, as the set contained many cards that are capable of fighting unfairly against the once-mighty Revelation, cards like the Sin Collectors in Chapin's deck. Still, if this second game proved anything, it's that Revelation is still capable of changing the fortunes of players in an instant, extending the game and drawing into valuable answers, as happened for Calcano. Without those Revelations, there was no Game 3. 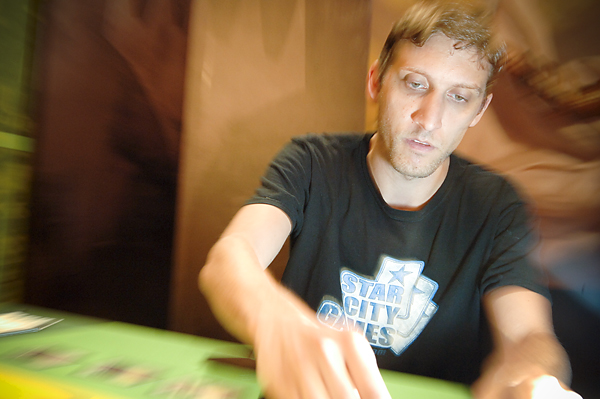 Chapin's Orzhov deck is packed with plenty of disruption and some powerful mid-game threats such as Obzedat, Ghost Council.

Chapin's start in the final game of the match was unlike any of his previous ones. Soldier of the Pantheon followed by Precinct Captain gave him an incredibly fast start, unlike his more disruptive starts in the earlier games of the match. His creatures ate swaths of Calcano's life total, quickly reducing him under ten life. On the draw, Calcano was set to be nearly dead by the time he hit four mana for a Supreme Verdict. He delayed by using Far to bounce the Captain, stripping it from Chapin's hand with a Thoughtseize. He saw that Chapin had a Pithing Needle and Read the Bones in his hand, along with the Zombie and Guildgate that he had seen earlier.

Chapin continued to pad his hand with Read the Bones.

"This is like a poor man's Sphinx's Revelation," he laughed, "A really poor man."

A Duress on the following turn stripped Chapin of a Pithing Needle, prompting him to comment, "You play a lot of that stuff," as he laid out his hand.

Still, "that stuff" wasn't enough to stop the threats that had already hit the table. When Calcano's Jace, Architect of Thought, was destroyed with Hero's Demise, he was left without any defense for Chapin's two little beaters. Two turns later, Calcano was dead.

After the match, Calcano admitted that he didn't think that he had played or sideboarded correctly against Chapin's deck.

"I had no idea what to do against your deck," he admitted. "I treated it like a control deck, but I'm pretty sure that was the wrong decision."

"Every chance you get to take Read the Bones, I would have taken it," Chapin offered. "Every time I cast it, I get to take two good cards. All of those times you are Duressing me, you only get to take one good card. It's the glue that holds this deck together."

Calcano clearly wasn't the only player who wasn't sure what to do against the deck, as Chapin and his teammate Paul Rietzl rattled off an incredibly record yesterday with the deck, all thanks to how well-positioned it is against the field.

"The main reason that Paul and I played this deck is because it has such a good game against Esper and the God decks. We have all of this disruption to beat control, and enough spot removal to prevent the God decks from ever reaching their devotion. My only regret is not playing more Doom Blades."