n the penultimate round before the Top 8 cutoff, Japan's Makihito Mihara met Frenchman Guillaume Wafo-Tapa. Both have four previous Pro Tour Top 8s with one win each, and clearly both were looking to add another (whether just a Top 8 or even another title) to their resume here in Dublin.

Going into the round, Mihara had twelve wins and two losses to Wafo-Tapa's eleven wins, one loss, and two draws. It was still to early to determine exactly what score would be needed to clinch a Top 8 berth, but a victory now would certainly put either player very close to the top.

Mihara was playing a devotion deck, albeit not one based in either red or blue which seem to be the most common choices, as it was instead based in green. The deck had been running rampant all weekend so far because of its strength against other creature-based devotion decks. Now, however, Mihara was facing Guillaume Wafo-Tapa, a player famous for his penchant to always play control decks. This time he was running Esper, a deck full of spot and mass removal, planeswalkers, and card draw. This match-up was expected to at least prove problematic for Mihara.

First up in Game 1, Mihara's Elvish Mystic and Voyaging Satyr both met their doom at the hand of aptly-named Doom Blades, then both players added their planeswalker of choice to the board: Mihara had Domri Rade, while Wafo-Tapa summoned Jace, Architect of Thought to his side. Jace and Domri each provided extra cards, but whereas Domri accumulated more and more loyalty counters, Jace lost all of his loyalty in the process. 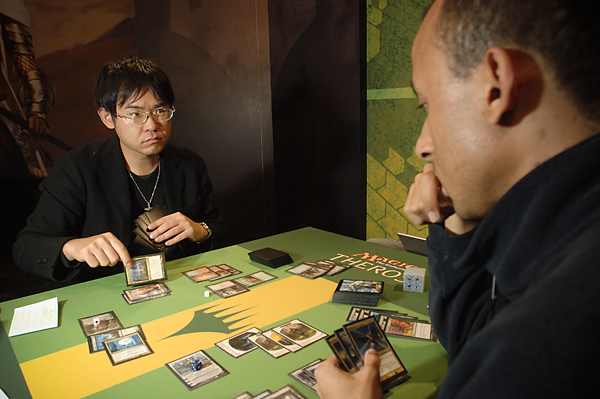 Makihito Mihara's deck had vulnerabilities to Supreme Verdict and a plethora of removal, but his planeswalkers and big mana turns could still let him churn through Esper's threats.

Mihara cast Nylea, God of the Hunt but had no creatures, Wafo-Tapa meanwhile made some with Elspeth, Sun's Champion. Not to be outdone, Mihara cast Voyaging Satyr and Polukranos, World Eater, making his God an active creature. Next turn, however, Hero's Downfall took care of Domri Rade just when it got its seventh counter, Nylea was tucked away under Detention Sphere, and Elspeth destroyed Polukranos, creating quite the turnaround in a game that should see more of such.

Next, Mihara cast Garruk, Caller of Beasts and replenished his hand, while Wafo-Tapa did the same with Sphinx's Revelation. Nykthos, Shrine to Nyx allowed Mihara to empty most of his hand again, while Elspeth Sun's Champion held the fort. Garruk, Caller of Beast continued to provide replacements, and when it died to another Hero's Downfall, was in turn replaced by another Garruk, Caller of Beasts. Wafo-Tapa had all the answers though, got rid of the second Garruk too, then wiped the board with Supreme Verdict. All the while he had always carefully managed Elspeth and her army of tokens, never putting her at risk of dying. She eventually took over the game and soon left Mihara going to the second game. 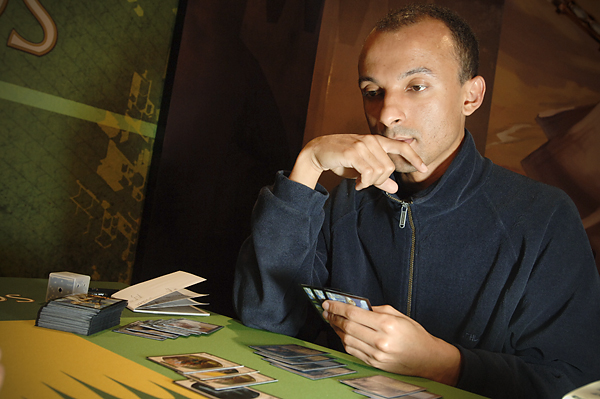 Guillaume Wafo-Tapa, surprising approximately nobody, chose to compete this weekend with Esper.

Mihara again opened on Elvish Mystic and Voyaging Satyr in the second game but missed his second land. On turn three he could do nothing better than attack with both. On turn four, he cast Sylvan Caryatid, then promptly lost all three of his creatures to Supreme Verdict. Jace, Architect of Thought came down, followed by Elspeth, Sun's Champion, and when Mihara finally did hit lands, he neither had spells to cast with them. He never found a fourth land and quickly succumbed to Elspeth's army of soldiers.

3 Thoughtseize 4 Soldier of the Pantheon