oing into this tournament, Reid Duke is the No. 5 player in the Top 25 Pro Rankings, with a number of high finishes to his name, including a second place at the 2013 Magic World Championship. Standing in his way this round is Jimmy Hartman whose path to the Pro Tour included winning a Pro Tour Qualifier early in the season. While the match-up here may have some parallel to the David vs. Goliath battle, both players had won the first round of the draft and were just as eager to continue that streak. 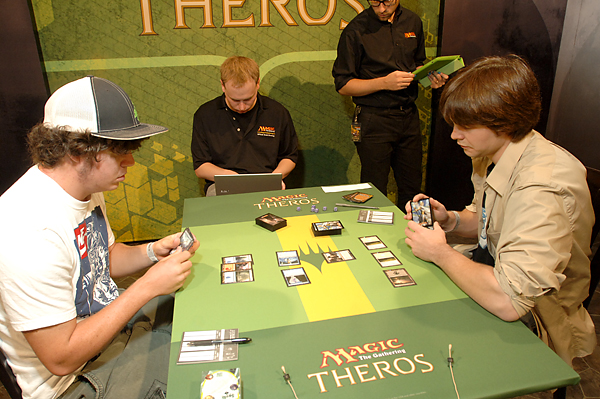 Pro Tour Qualifier winner Jimmy Hartman is kicking off his second round of the weekend against Reid Duke, No. 5 Player in the World and 2013 Magic World Championship finalist.

Duke had drafted an overall rather defensive white-black deck with the potential to deal a surprisingly large amount of early damage with Ordeal of Erebos, then quickly close games with the help of Gray Merchant of Asphodel and three copies of Scholar of Athreos. Hartman brought a blue-red deck to the fight, full of solid creatures like Nimbus Naiad and Ill-Tempered Cyclops, preferably combining various forms of evasion with his Bident of Thassa.

Duke was the first out of the gate in Game 1, with Setessan Battle Priest, Scholar of Athreos, and Chosen by Heliod providing a lot of toughness but not too much offensive capabilities. Meanwhile, Hartman cast actual attackers in the form of Nimbus Naiad plus two copies of Ill-Tempered Cyclops and Duke's initial advantage was all but forgotten. He tried to stem the tide with the help of Lash of the Whip and Gray Merchant of Asphodel, but when one Cyclops acquired an Aqueous Form and three +1/+1 counters it soon was just Duke's Scholar of Athreos racing against the inevitable. Activating Scholar twice each turn did bring Hartman down to 8, but in the end it just wasn't enough and Hartman took the first game.

In the second game, Duke had a much more aggressive start with Tormented Hero and Ordeal of Erebos. These two combined to quickly put Hartman at 16, then 12, while Hartman's Crackling Triton couldn't do much to stop them. Triad of Fates followed and was about to seal Hartman's fate. In an attempt to possibly get back into the race, Hartman cast Portent of Betrayal on Tormented Hero, attacked and triggered Ordeal of Erebos: "Discard two cards?" Duke re-read the card and consulted a judge: "My understanding is that I still control the enchantment, right?" Hartman had misunderstood the interaction of the cards at first but was quick on the uptake: "So now I get to discard two cards? Oh man ..." 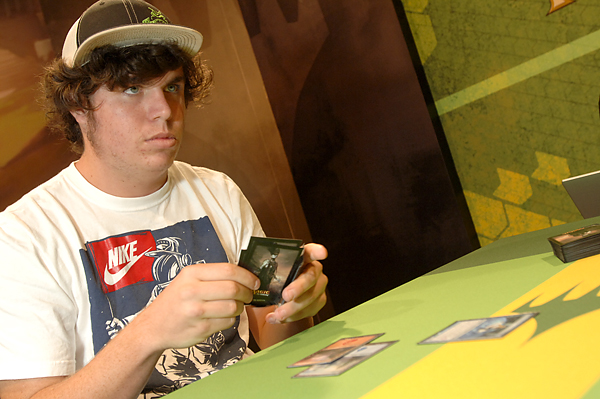 Hartman walks into a dangerous trap when he takes control of Duke's enchanted creature for a turn.

Another attack and Gray Merchant of Asphodel from Duke wrapped things up. "Sorry about that misunderstanding," Duke offered. Hartman wasn't too shaken though. "I don't think I could have won this game anyway."

Hartman dominated early in the third game, but soon a close race developed. On one side there was Hartman's Omenspeaker, Nimbus Naiad, and Purphoros's Emissary with Acqueous Form, on the other side, Duke's Observant Alseid had just received two copies of Ordeal of Erebos. Then Hartman dropped Bident of Thassa. The game was going bad for Duke, but he managed to get back ahead in the race with Gray Merchant of Asphodel before turning his Observant Alseid into a vigilant 6/6 and emptying Hartman's hand via the Ordeals. 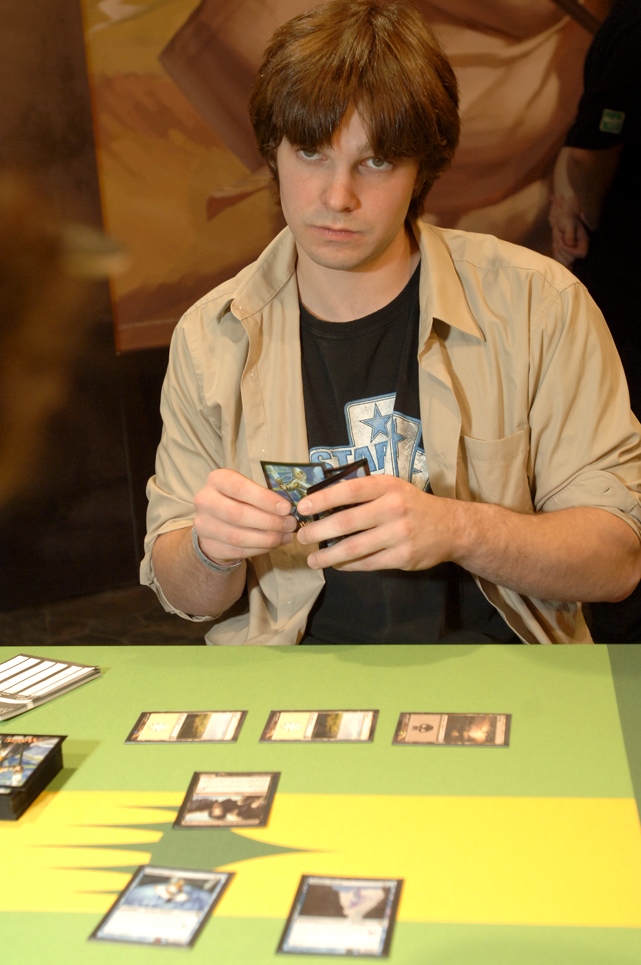 The attack didn't go as planned, however: Hartman had Triton Tactics and blocked with all of his creatures; Observant Alseid died, as did Purphoros's Emissary. Hartman was still left with Nimbus Naiad, though. That and his Bident of Thassa meant he was able to recover much more effectively from the exchange. Soon the cards were flowing and another Nimbus Naiad and Ill-Tempered Cyclops finished the game and match.

Afterwards, Hartman asked for Duke's opinion regarding the triple block in the final game when Hartman had given up his Purphoros's Emissary. "It's hard to judge from my perspective, of course," said Duke. "But I probably would have just chump-blocked with Omenspeaker, tapping the Observant Alseid with Triton Tactics. By the time it would have untapped again the Emissary should have already put you so far ahead, especially with Bident of Thassa..."

Bident of Thassa was also the card Duke mentioned when asked about the key play of the match. "That Bident coming down just before I could get at it with my Ordeals was unfortunate. The Bident really negates everything, because it immediately refills the hand too."