" think I'm the best Theros drafter in the room."

With these words, Christian Calcano painted an invisible bulls-eye on his back, whether he intended to or not. This came out in a discussion with the players on Thursday night's registration, and it became something that quickly circulated amongst the coverage staff. Calcano had thus far lived up to his own hype, starting off with a 2-0 record and a powerful deck. Saying you're the best means nothing if you don't prove it, and Calcano was doing a good job so far of silencing any potential critics.

His opponent this round, the Brazilian Hall of Famer Paulo Vitor Damo da Rosa, presented an impressive obstacle, both because of his immense skill as well as his deck. His white-blue deck with a splash of black featured a slew of incredibly defensive creatures and lifegain, all ideal against Calcano's aggressive deck. 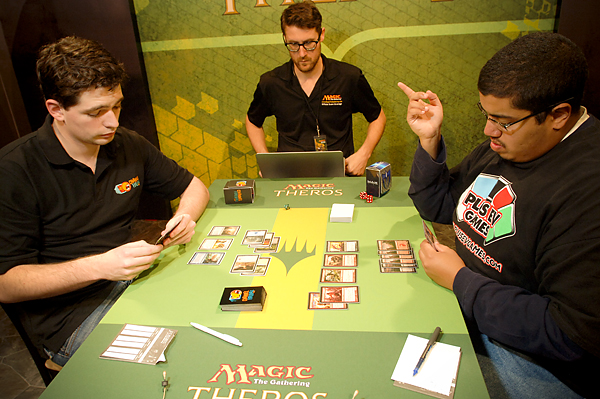 Christian Calcano, self-proclaimed best Theros drafter in the room, sat down to see if he could claim a 3-0 first draft against his opponent, Hall of Famer Paulo Vitor Damo da Rosa.

Calcano got a speedy start, as black-red usually does, curving a Satyr Rambler into a Minotaur Skullcleaver. He was able to get in for a bit of early damage, but Damo da Rosa put a fast stop to that, using an Opaline Unicorn to get a Silent Artisan to bar the way. In this match-up, the Artisan might as well read "dead end" for the black-red deck. Just as Calcano found an Erebos's Emissary to force through it, Damo da Rosa found yet another great defensive creature, the Guardians of Meletis, to complete his impressive defensive front.

It seemed from the outset that Damo da Rosa's deck was uniquely suited to deal with Calcano's hyper-aggressive deck, at least in the early game. His mounds of toughness presented gigantic obstacles for Calcano to deal with, and an Evangel of Heliod added some chaff Soldiers to lend their support. Damo da Rosa had an entire city's worth of walls to hide behind. Still, though his defense was might, he didn't have much in the way of pressure to prevent Calcano from finding something. He slowly started to build up fliers, including a Horizon Scholar and a Prescient Chimera, but the threat of a monstrous Stoneshock Giant forced him to keep them home. Though he was unable to attack, Calcano's threats were dictating the play from Damo da Rosa's side. 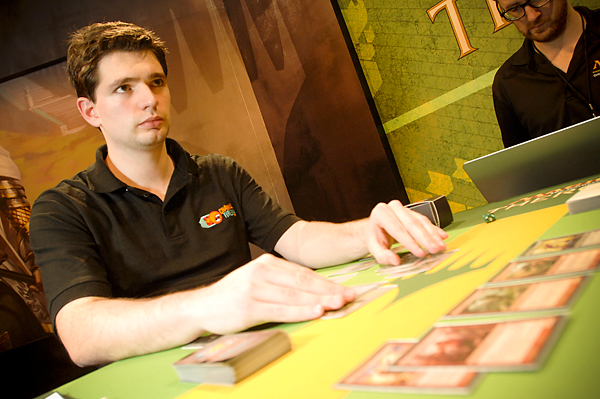 After passing back and forth for a few turns, Calcano decided to begin to speculatively attack. He had an Ill-Tempered Cyclops with a Dragon Mantle on it, made it monstrous, and began to attack. Damo da Rosa lined all of his walls up in front of it, forcing Calcano to spend all but one of his mana to pump it. He was careful to leave one Mountain and three Swamps untapped, lest his Cyclops meet his Voyage's End. Instead, Damo da Rosa used Dauntless Onslaught to pump his Silent Artisan and his Chimera, saving the Artisan from death, but losing one of his blockers should the Giant go monstrous.

Damo da Rosa followed this up with a Scholar of Athreos, finding himself a way to begin to apply pressure to Calcano, and swinging things in his favor. Calcano attacked in nonetheless, adding a Spearpoint Oread to his Emissary before attacking in with it. Damo da Rosa contemplated his blocks before once again lining up all of his creatures in front of the rampaging elemental. Calcano was quick to make sure that the Horizon Scholar died first. Or at least would have if Damo da Rosa didn't have a Divine Verdict to kill the Emissary before damage.

The addition of Scholar of Athreos to the table completely changed the complexion of the game, giving Damo da Rosa something to begin to press Calcano with, and taking him out of the driver's seat. Calcano tried to wrest control of the game back by making his Giant monstrous and attacking with his team. Damo da Rosa blocked the Firedrinker Satyr with his Horizon Scholar and used the Scholar of Athreos twice, ending the combat with a mere 2 life, but once again in control of Calcano's potential attackers. With the threat of the monstrous Giant out of the way, Damo da Rosa even found himself able to begin attacking with his Horizon Scholar, closing Calcano's window of opportunity even quicker. As the Scholars went to school on Calcano, he nodded his head and picked his cards up, securing the first game of the match for the Brazilian Hall of Famer.

Damo da Rosa's start for the second game was less than ideal. Keeping a two-land hand with an Opaline Unicorn, he stumbled on mana early, skipping his third land drop for a turn. This allowed Calcano, who hit every one of his, to begin to devastate Damo da Rosa's life total. His Minotaur Skullcleaver was dealt with, but the Flamespeaker Adept that picked up a Cavern Lampad on the following turn was able to get in for some serious damage before Vanquish the Foul removed it. Leaving the Lampad on the table behind it, the Adept had managed to whittle Damo da Rosa down to a critical four life, just two turns from defeat. He barely escaped with his life thanks to a timely Crackling Triton, able to activate it thanks to his Opaline Unicorn. A Demolish forced Damo da Rosa to make the play, leaving Calcano with the lone creature in play: a Spearpoint Oread. 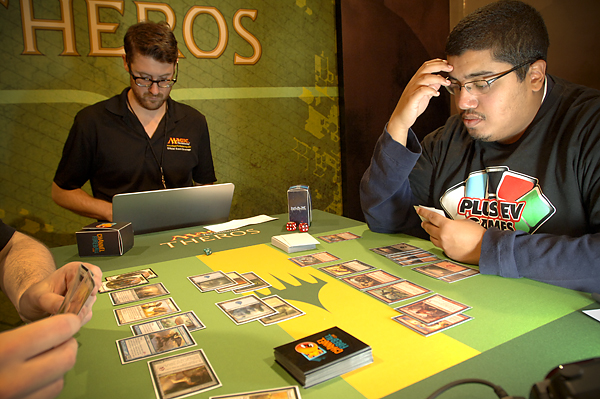 Calcano's red and black creatures can pressure his opponents from many different angles.

Damo da Rosa scrambled his troops, adding a Prescient Chimera and Horizon Scholar to his side of the board on consecutive turns, each large enough to stop the Spearpoint Oread, even with the Ordeal of Purphoros sitting in Calcano's hand. A Boon of Erebos allowed Calcano to both attack in, kill off the Horizon Scholar, and end up large enough to safely attack into the Chimera on the following turn. Damo da Rosa had a Nimbus Naiad to push the Chimera out of range, but he had to tap nearly out to do so. This left the window open for Calcano to use Portent of Betrayal to steal Damo da Rosa's only creature and attack with it, sending the match into the final game.

In the final game of the match, Damo da Rosa once again hit the brakes on Calcano, getting down a third-turn Guardians of Meletis. The Prescient Chimera that followed presented not only a toughness high enough to stop Calcano's troops, but a power capable of culling them away as well. Still, Calcano found ways to press him. When a Two-Headed Cerberus picked up a Dragon Mantle, it suddenly threatened to crush what Damo da Rosa had been able to assemble in terms of defense. Still, Calcano's reticence betrayed that he felt Damo da Rosa was holding one of the removal spells that had stymied him in the previous two games.

Worse than any removal spell, Damo da Rosa held a Hopeful Eidolon, bestowing it onto his Chimera. Now an even larger threat, the lifelink bestowed by the Eidolon would crucially determine Damo da Rosa's ability to extend the game. As such, it was no surprise when he simply began to attack, letting the lifelink lead the race.

Calcano had a race-ending threat to add to his side, though: Purphoros, God of the Forge. Calcano was just barely inside the devotion to turn the God into a 6/5 creature, and the extra damage offered by his ability was ideal for offsetting the life-gain of the Chimera. Damo da Rosa was in a tight spot.

Calcano began to attack, rapidly dropping Damo da Rosa's life total into single digits. Damo da Rosa did his best to stay alive, using Ray of Dissolution and Last Breath to keep Calcano out of devotion, but a Portent of Betrayal represented a massive loss of life, dropping all the way down to 1. All that Calcano needed was another creature to trigger Purphoros, and he would be off to the Standard portion of today with a perfect 3-0 record in Booster Draft. Damo da Rosa padded his life a little more with a second Ray of Dissolution and an attack from the Chimera, but Calcano found the perfect answer. He added a Stoneshock Giant to his team, putting him over the devotion threshold, as well as representing a lethal attack should the Giant go monstrous.

Damo da Rosa had a great play to extend his life one more turn, using Last Breath to kill one of Calcano's creatures mid-combat, turning the attacking Purphoros back into an ephemeral being, but Calcano simply refilled his board with creatures, dealing four more damage from Purphoros triggers in the process. In the end, Purphoros and his supporting cast had dealt too much damage for Damo da Rosa.