his Round 5 match-up between inaugural Hall of Famer Olle Råde and Team StarCityGames's resident deck-building genius and 25th Ranked Player Sam Black encapsulates one of the key elements of the newest incarnation of Standard: the presence of very clear, very focused hate cards. Råde's Gruul Monstrous Midrange deck features one of the newest of those, Mistcutter Hydra, a card that is very clearly a bane in the side of every deck featuring Islands. Black, who happens to be running one of those Island decks, comes with his own hate in the form of Tidebinder Mage (hits virtually all of Råde's creatures) and Master of Waves (offense and defense in one complete package). These cards utterly defined the play of this match, forcing both players to take note of them and deal with them in short order, or be destroyed.

"I love when Tidebinder Mage has text," Black remarked after one game in this match. When Råde responded that it often does in this format, Black was forced to agree. 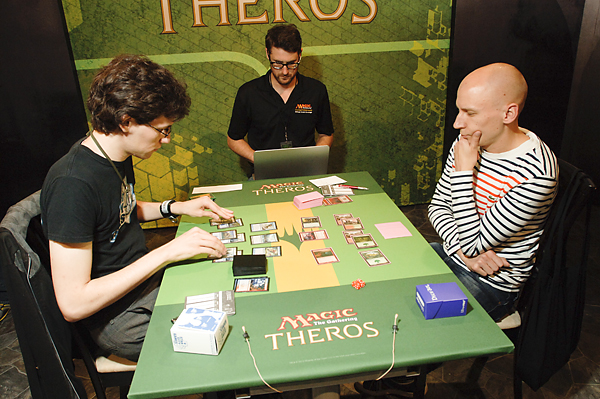 The first of these cards to make an impact in this match was Tidebinder Mage. After Råde had used a Sylvan Caryatid to ramp himself into an early Ember Swallower, Black used the Mage to tie it down, protecting his life total. Råde was able to remove it with a Mizzium Mortars, freeing his fledgling monster to attack, but not before Black got a leg up on turns. The brief pause allowed him to get Thassa, God of the Sea, and the Bident of Thassa into play, putting him dangerously close to Thassa's devotion threshold.

Råde punished Black for not having another answer to his threats, playing a Stormbreath Dragon and getting in there for 8 damage. As we learned over the past year or so of Standard, large, hasty fliers are very good. Fortunately, Black had another answer, dropping Master of Waves into play, giving him a massive army and a permanent defender against the Ember Swallower. Even when Råde used Mortars to clear the board, the Master survived thanks to its protection, keeping Råde's damage to a minimum. While Black was low on health, he was able to clean things up with a second Master of Waves and a Tidebinder Mage to tie down the Dragon, refilling his board and giving him a great answer to the Dragon. Råde didn't have another Mizzium Mortars, and Thassa and her army of 3/2 Elementals were able to finish Råde off and send things to a second game. 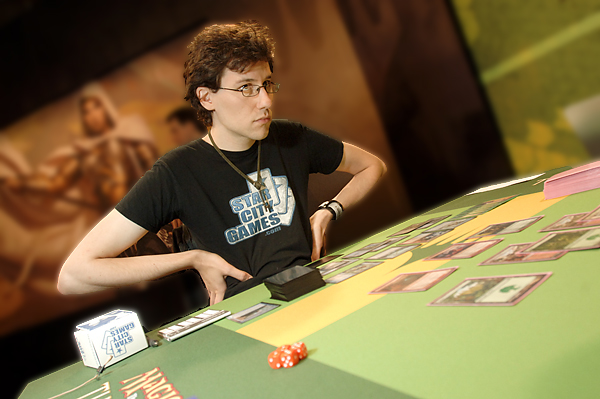 Black summons forth wave after wave of creatures.

In this game, it was Råde's hate cards that forced Black to react. Råde had a pair of early Mizzium Mortars in the second game, using them to great effect in removing Black's early plays. Opening with Frostburn Weird and Nightveil Specter would have allowed for a massive Master of Waves, but the Mortars kept Black from trying anything particularly aggressive. After slowing down the start, Råde began to recruit his monsters, starting with a pair of Ember Swallowers. All Black could summon to compete with them was a lowly Judge's Familiar.

Råde began his assault. He became a little leer when Black passed the turn with six open mana, fearing to make his Swallowers monstrous. He just attacked for 8 damage, halving Black's life total. He cast a Domri Rade after combat, immediately revealing the powerful Mistcutter Hydra, a card that Black would be hard-pressed to defeat. Black simply attacked for 1 and passed the turn back, seven Islands untapped.

Råde had a chance to go for the kill, tapping out for the Mistcutter Hydra and attacking. Black calmly tapped all of his lands and used Cyclonic Rift to return Råde's entire board to his hand. With the path now clear for a bit of attacking of his own, Black dropped a Bident of Thassa onto the table, activated his Mutavault, and attacked for two cards. 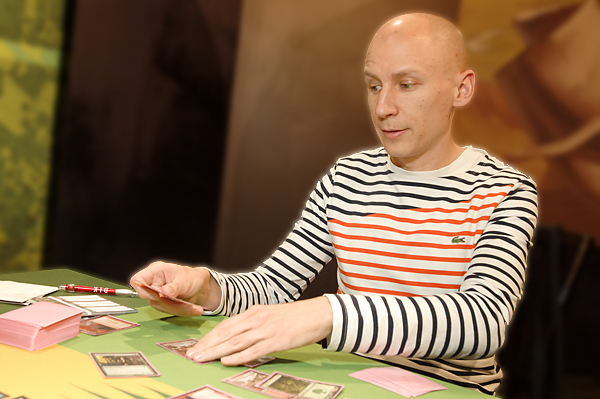 Råde unleashes some cards that are particularly good against Mono-Blue decks: Mistcutter Hydra.

This attack left Black with only two Islands up, and no creatures capable of blocking the Hydra that was inevitably going to hit the table, and likely him. Fortunately for him, Råde didn't have the ninth land needed to make it immediately lethal, so he simply took the damage when it attacked him for 7, dropping to 1. Black cracked back, beginning to add more and more threats to the table to try and end things before the Hydra ended him. Interestingly, Black attacked with his Mutavault, once again leaving him without a concrete blocker for the Hydra on the board. Something had to be up.

When Råde tried to use Mizzium Mortars to clear away one of Black's creatures, Black revealed his answer for Råde's blue-hating Hydra: Rapid Hybridization. When is a blue creature not a blue creature? When it's a green creature. Hybridization not only gave him a green creature to block the Hydra, a second copy gave him a great answer to the Stormbreath Dragon that Råde tried to kill him with, as well.

Black was one turn away from having a lethal army, needing simply to survive one more turn with his team and life total more or less intact. This time, he had left his Mutavault untapped, signaling that he may have been out of Rapid Hybridizations. Before attacking, Råde dropped a Polukranos, World Eater, into play. Normally, this wouldn't have been frightening, but he also had the ninth land final, giving him a way to instantly kill the Mutavault that appeared to be Black's last line of defense. When Black activated the Mutavault and moved to block, Råde took that exact shot, and Black scooped up his cards, out of ways to deal with the Mistcutter Hydra.

"I did not think there was any way I'd have any chance at that game when my first four draw steps were Islands," Black admitted. "At least it was a really good game." After more thought, he added, "I am not a big fan of that Hydra," with a smile.

"I can see why," Råde laughed. "I'm not a big fan of Tidebinder Mage, to be honest."

"I suppose that's fair," Black admitted with a chuckle.

In the final game of the match, Råde prepared himself for his fastest start yet, playing a first-turn Elvish Mystic, but a Tidebinder Mage immediately tapped it down. He filled the void with Scavenging Ooze, forcing Black to keep his Tidebinder Mage home. While not ideal, the Mage still provided him with a permanent removal spell, which is an excellent thing to have when you are playing cards like Thassa and Master of Waves. Knowing this, it was no surprise when Råde used a Domri Rade to tråde off his Ooze for the Mage. Unfortunately for him, Black not only killed the Domri with his Mutavault, but he had a second copy of Tidebinder Mage to keep the Mystic locked down once again.

Råde had access to four mana, giving him enough to cast Polukranos, World Eater. This also signaled a chance in the very near future to eliminate the Tidebinder Mage, freeing up his Mystic yet again. Considering a Bident of Thassa turned Black's Thassa, God of the Sea, into a creature, this would have the doubled effect of keeping Black out of devotion. Unfortunately, Råde's only land for the turn was a Temple of Abandon, meaning he would have to wait a turn to enact this plan. In the meantime, he simply took advantage of the opening to attack for 5 before using Destructive Revelry to rid himself of the Bident, reverting Thassa to an enchantment. He also had a Mistcutter Hydra for 1, the perfect blocker should Black manage to once again enter Thassa's devotion threshold.

Black had a second copy of Bident to go back over the threshold limit and allow Thassa to continue her divine assault. Shock took out the Tidebinder, dropping Black out of devotion. It wasn't likely to stay this way, but it still forced Black to carefully consider his next plays. When Råde made a second Mistcutter Hydra, this time for three, Black had to use his Judge's Familiar to block Polukranos, dropping him further from devotion. All he could do was play a Master of Waves for 4, giving him plenty of fodder to stop Polukranos, but nothing that could stop the Hydras. He sat on 7 life, facing down four points of Hydra damage, with nothing but a Mutavault and an Island between them and his life total.

Råde tried to make his Polukranos monstrous before attacks, but Black held a Rapid Hybridization, turning the giant Hydra into a Frog Lizard, something quite monstrous in its own right. This proved to be a crucial turn in the match. Råde held a land that he could have played before activating his Polukranos. This would have allowed him to activate it for one damage, trying to kill the Master, and then activate it a second time in response to the Rapid Hybridization. This would have very nearly cleared Black's board and put Råde into a commanding position on the board. Instead, a second Master of Waves joined the board one turn later, turning the remaining Elementals that Black held into an overwhelming force, especially combined with an unblockable Thassa.

In the end, while the hate cards in each of these decks clearly drove the action in this match, it was the unique answers each of the decks had to deal with them (Polukranos and Rapid Hybridization) that decided the outcome of this match.