t has been impossible at this stage in the tournament to walk through the top tables and not trip over one of the top players in the game. The top of the standings is absolutely oozing with talent. Among this massive block of impressive resumes are a mind-boggling nine Hall of Famers, from the three recent inductees to members of the inaugural Hall of Fame class. Matching up this round is one of the many Hall of Famer mirror matches we've been privy to over the course of this weekend, this time between Rob Dougherty and Kai Budde.

Their decks were a perfect illustration of the spectrum of possibilities within Theros Limited. Dougherty's UW Heroic deck had a ridiculous three copies of Favored Hoplite, as well as more than enough methods of turning his heroic creatures on. Heroic is one of the most misunderstood archetypes in the format, often thought as blazing fast due to the generally low cost of many of the key components, but it is in actuality far more of a midgame strategy than anything else. The commitments to the board certainly hit the table early, but it's not until turns four or five that the deck really kicks it into high gear.

On the other side of the table, Kai Budde has a bomb-laden UB deck, and a deck that is very representative of the style. Between a bevy of great defensive creatures and fliers, Budde's deck is built to either punish opponents for being unable to deal with fliers, or it draws them out into the long game, where cards like Whip of Erebos and Shipbreaker Kraken can take over the game. 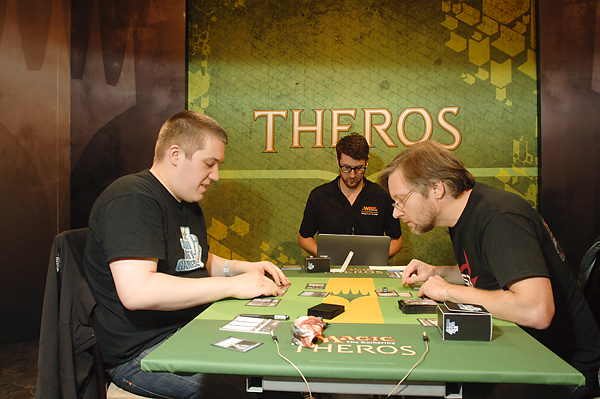 Hall of Famers Kai Budde and Rob Dougherty face off against each other at the start of Day Two, both players representing different blue combinations from their draft.

Dougherty was forced to mulligan to six for Game 1, and the hand that he mulliganed into wasn't one that he was too pleased with. Still, his hand had lands and spells, so he couldn't really risk running that back for a random five. This left him without a play for the first three turns, uncharacteristic for the usually fast and aggressive UW, but Budde didn't have much aggression to punish him. All he had was a Blood-Toll Harpy on the third turn, and nothing at all on the fourth, where Dougherty's creatures made their first appearance.

"Just in time," Budde laughed as Dougherty tapped a land for his first Favored Hoplite.

"Tell me about it," Dougherty sighed with a smile.

Eventually Shipbreaker Kraken made an appearance for Budde, and given the board and life advantage he had managed over Dougherty's slow start, it eventually led to his big turn. A few turns later, Budde nleashed the Kraken upon Dougherty's team with monstrosity, clearing the way for an easy sixteen points of damage to end the first game. 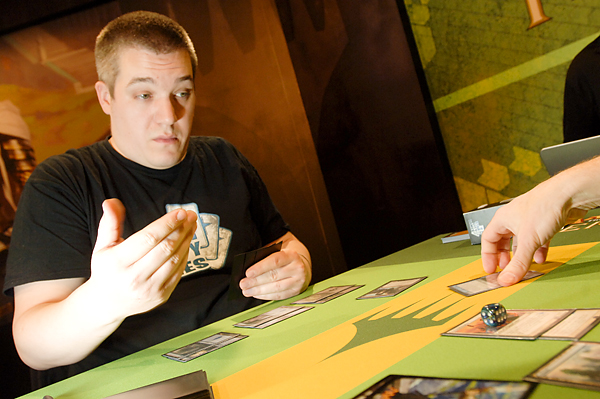 Budde's big start pushes him a game ahead in his first match of the day.

Dougherty began the second game with a first-turn Favored Hoplite, right on time for once. The Cavalry Pegasus that followed ensured that it would always be able to get up and over the massive, ground-based defenders that Budde had shown him in the previous game. A second Hoplite joined the party, and a third soon thereafter, drawing a laugh from the German juggernaut.

"Hah, your deck looks...uh...pretty good," he chuckled, comparing this draw to Dougherty's previous one.

Dougherty's assault was fast and furious. Budde had managed a Nimbus Naiad to try and eliminate the Pegasus, but Dougherty's deck was fully equipped to deal with it, going over the top with a Battlewise Valor, one of multiple in his deck. Budde quickly fell to 10, and a Read the Bones to find some defense dropped him even lower. Dougherty was two turns from victory, one with the right cards, and Budde had nothing but lands in play. A second Battlewise Valor on one of the Hoplites added the exact amount of damage that Dougherty needed to quickly even the match.

"That was a slightly faster draw than my previous one," Dougherty smiled with a nod.

"That is certainly true," Budde admitted. "I can't believe you have three of those Hoplites. They're one of the best uncommons in the set." 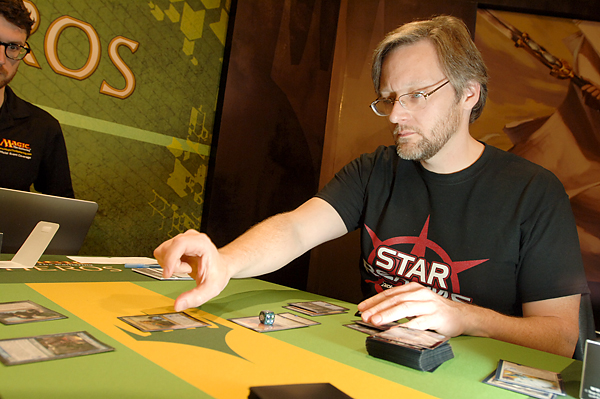 Dougherty shows off just how fast his heroic deck can be.

Dougherty led off strong in the final game, the first of his Favored Hoplites hitting the table on the first turn, joined soon thereafter by a Battlewise Hoplite. Budde had a Pharika's Cure to kill the more Battlewise of the Hoplites, saving himself a world of potential hurt. Beyond this open, however, Dougherty was a bit stalled. Budde managed to begin to race in earnest himself, using a Blood-Toll Harpy to take to the currently unoccupied skies. Budde's monopoly on the sky didn't last for long, however, as a Cavalry Pegasus joined Dougherty's side of the table, again giving him a way to get over any ground defenses Budde might muster.

Unlike most aggressive decks, the UW Heroic deck in Theros Limited really gets interesting in the mid game, as the enhancers begin to come out and turn the heroes into monsters in their own right. Rather than begin that chain, however, Dougherty just skipped straight to the monster part, recruiting a Sealock Monster to his side, an excellent card against Budde's UB deck, albeit not as good as the card that Budde played to match it.

"Whip?! That's a good'un," Dougherty said in shock, as Whip of Erebos hit the table.

"Everyone on my team keeps telling me that this is a top five card," Budde responded, "But I'm not sure I see it. It's not that great right here. I took it over a Keepsake Gorgon, but the Gorgon would really have some upsides right here."

Dougherty began the process of trying to get through Budde's life total before the Whip became relevant. His attackers ran into the Blood-Toll Harpy, and a Battlewise Valor looked to push through it just as in the last game. Budde squelched this idea with a Boon of Erebos, keeping his Harpy alive and killing the Cavalry Pegasus. Untapping with a bit of breathing room, Budde used a Thassa's Bounty to fill his hand and his graveyard for the Whip. A Shipbreaker Kraken hit his graveyard, not quite as good as going to his hand, but still potentially quite powerful with the Whip active.

Dougherty took to the skies with a Nimbus Naiad on his Favored Hoplite, but it didn't look like it would be enough if things continued this way. With his filled hand, Budde was able to simply explode creatures onto the table. A Vaporkin and a pair of Returned Phalanxes hit his side of the table, a perfect way to take over the game with the lifelink from the Whip. Dougherty had some lifelink of his own in the form of a Hopeful Eidolon for his Hoplite, and it looked like this game might settle in for a long haul, something that strongly favored Budde's deck.

The players continued to trade lifelinking attacks, gaining and losing so much life that they had to switch to an additional piece of paper to continue tracking the changes. Budde did have the advantage on the board, but it was going to take most of his mana to take full advantage of it. Even then, with the Sealock Monster and Favored Hoplite beginning to play defense, his chances for a profitable attack weren't particularly high. As such, he and Dougherty both simply began to add to their boards and stare at each other's creatures.

Dougherty was the first to break the stalemate, sending his Sealock Monster in with the threat of monstrosity looming. Budde threw everything but his Harpy at it. Dougherty made it into an 8/8, choosing to trade it and his turn for a Naiad-bestowed Fleshmad Steed and one of Budde's Phalanxes. This really only culled one of the creatures from Budde's board, but Dougherty's remaining two creatures were still enough to hold Budde's five off.

Each turn that passed pushed Budde closer and closer to victory. With the Kraken in his graveyard, he needed to get to twelve mana to activate his Whip and make the Kraken monstrous, clearing the way for an alpha strike. A Read the Bones allowed him to dig a little deeper, searching for that last land.

After Budde played a Wavecrash Triton, Dougherty knew he needed to get his life-gain while he could, attacking with his Hoplite to gain six life up to 19. Budde proved that this was the correct call when a Baleful Eidolon enchanted his Wavecrash Triton, targeting the Hoplite to keep it tapped and deny Dougherty a source of life. He then used the Whip to get back a Benthic Giant that had been countered with a sideboarded Gainsay earlier in the game and attacked with his team. It wasn't a lethal attack, but it was incredibly close. Dougherty traded off what he could, but he was unable to stop the fliers from crashing through.

With the game having reached this point, with creatures trading in combat on both sides, Budde's Whip really shined. He was able to get back a creature each turn, adding to his attacking force, if only transiently. The final crack came when Budde, with five cards left in his deck, drew the final land he needed to monstrous his returned Kraken and attack for the win.

"The Whip has always been fairly mediocre for me," Budde discussed with Dougherty after the match. "The most I've really seen it do was give two or so guys lifelink. But it was incredibly good in that last game."