here is perhaps no set of cards in Theros Limited that varies as wildly in value based on context than the cycle of single-color hosers. In many match-ups, cards like Dark Betrayal and Gainsay are utterly useless. In others, they are one of the best cards in the deck, all depending on what the particular match-up is. They can actually go from worst to first over the course of a single round.

The development behind these cards ultimately came from the philosophies of Head Developer Erik Lauer. As a member of the development and design teams for Theros, Hill has an intimate knowledge of the goals and philosophies that led to the set being the one we see before us today. Theros Limited is a very easy set to pick up and draft, but a very difficult set to draft optimally. Part of the reason for this is the fact that there are simply no bad cards in the set. As the saying goes, "a place for everything and everything in its place." In Theros, everything really does have a place, and each card performs admirably when placed properly. Hill explained that this was due to Lauer's wonderful philosophies of how to bring balance to a set.

"Lauer is big on not just having filler cards in a set," Hill explained. "Instead, the ways that you should grade a pack is to make cards narrower and narrower, not worse and worse. Because of that, it lends to sideboarding being a big thing. But it also lends to being able to table stuff a thing. Being able to tailor a deck that you're building knowing that I need this specific effect for this deck and being able to get it because other people don't need that narrowness."

This happens all of the time in Theros Limited, and we've already made mention of it quite a bit since the debut of the format. Theros is more about drafting decks than just picking cards, looking for the specific effects that enhance the goal of your deck. You want to be a deck-builder, not a card picker. This concept of drafting a deck can be illustrated by the ideal example of Scholar of Athreos.

Jacob van Lunen, Pro Tour Champion and Magic Coverage Reporter extraordinaire, went 5-1 over the Limited portion of Pro Tour Theros drafting control decks in both drafts to achieve this result. Scholar of Athreos was integral to both of his decks, and BW control decks like his are the absolute perfect home for cards like the Scholar.

"It's a 1/4 body that gives me a way to keep my life total high and slowly kill my opponent," he told me. "It's an incredibly powerful card, but I was able to get them late in the packs. Once I realized that I was the only BW drafter at the table, I was able to pass a Scholar at one point and get it back out of that pack." 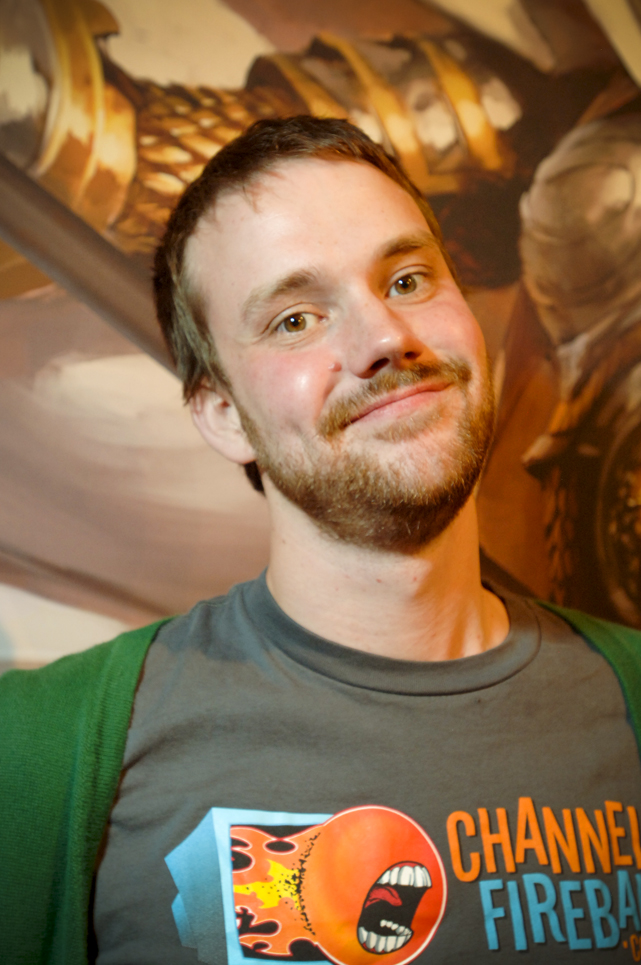 The reason that he was able to get it so late isn't because it's a bad card, obviously. In fact, it's been one of the best cards in Van Lunen's decks. But because it is so specific in its scope, it's only highly prized by one group of players.

"There are other decks that will play the Scholar," Hill commented, using the same example. "Even the UW deck needs a big wall to shore up the ground. But they don't get maximum value out of it the same way a BW deck will. This difference in values adds a level of complexity to drafting this format, but it allows you to tailor-draft your deck to your needs."

Van Lunen had another great example of a card that is seemingly broad on its surface, but actually has quite a niche appeal.

"Setassan Battle Priest is one of those cards, too," he explained. "It's really not good in the two heroic decks, but the life-gain and defense are essential in the slower white-black deck."

Taking this concept of niche uses to the next level are the cycle of five color hosers in the set: Glare of Heresy, Gainsay, Dark Betrayal, Peak Eruption, and Hunt the Hunter. These cards are obviously only good if your opponent is playing the appropriate color, but, if they are, they get good. 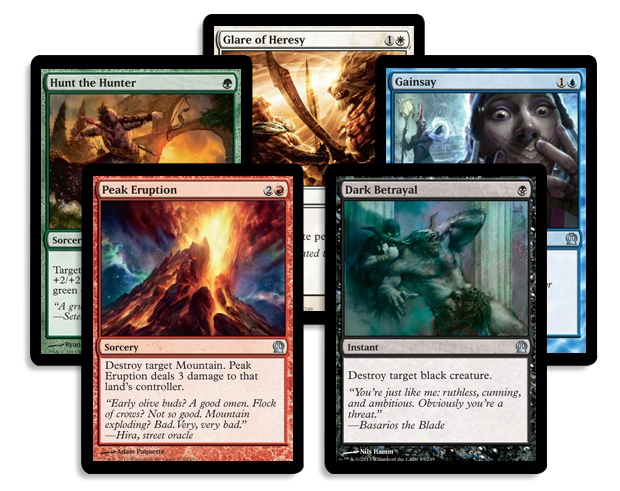 Cards like these were designed to be the perfect sideboard options for players who value them at the right point in a draft.

"These cards are first-pick quality cards in the right match-ups," Hill explained. "You aren't going to first pick them, but the design of the set allows you to take them much earlier than you might have otherwise. This card pool is really deep. You routinely get fourteenth-pick, playable cards. There aren't many cards that you're going to end up with that aren't going to get played in this format. This means that the issue isn't 'Am I going to get enough cards in this deck,' its 'How can I present the optimal 22-23 cards every single one of my games.' Because of that, you're going to be sideboarding two or three cards every single game, against every single opponent. And you play more sideboarded games than unsideboarded games.

Because the format is so deep, you don't need a 25th card. What you really want to have is an option for the third or fourth best card in your deck for any given match-up. If you aggregate the impact of these cards over all of the matches that you play, the role-players are going to be more valuable to your deck in the long run, averaging out to be like the twentieth-best card in your deck, even though you aren't playing it for over half of your matches. In formats that are less deep, you not only need more cards for your deck, but there exists a greater stratification of the good cards to the bad cards. This makes the opportunity cost of taking one of these sideboard-bound cards much higher."

"Those cards are almost always one of the best cards in your deck, assuming you're playing against the right colors," he told me. "You have to value them much higher in this format than others because the format is so deep. You don't have to worry about having enough playable cards, so you can afford to be more speculative than you otherwise might be. You have to think about drafting Theros in terms of drafting a really good Sealed Deck pool that you get to build a new deck for each round. You are trying to draft a deck, not just take good cards. As such, you have to realize that there are going to be cards that are going to make your deck better, and these cards do a wonderful job of that. I'm never going to start them. At least I can't think of a situation where I would. But I know that there's always going to be cards that I will be playing that are in my deck because I have to hedge. I don't know what my opponents are playing each round. Once I know what I'm up against, though, there are always some cards that aren't that great, and I love having cards as good as these to take their place."

Sideboarding is always a common consideration in Constructed, but it is just as important in Limited. It has been a while since a set lent itself to a thorough sideboarding discussion as well as the incredibly deep Theros does. Think about ever draft that you've done so far, and the number of cards you've had to cut to finish your deck. From personal experience, I know that it's always around four or five cards. I also know that I had plenty of opportunities to take strong sideboard options, as I'm sure you all probably did. After these enlightening conversations, I'm sure that I'll be looking more closely at the contents of my deck and where I'd like it to be going in the future.

After all, I don't want to be a card picker.